Artist Anicet Balli: "I Associate Art In Everything I Do." 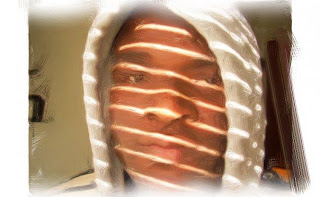 “My first idea was to pick them, fix them up and resell them to a local clothing store owner because they were still in good shape. But as I took them home and left them standing in the living room, I had a sudden thought to transform them into some artwork.  I bought acrylic paints and started drawing on them whatever I felt.”

He decided the first mannequin would represent fall, the season he was feeling at the time.  He painted one side of the mannequin in black to represent her shadow that she casts when the sun is brightly shining.  The other side he painted flowers, tree leaves, and seeds. He placed a lamp in her hand.

“The one with the lamp around her face is the opposite of Medusa.  She represents the spring season, which has an intimate connection with light because it causes plants to grow and flourish.  I got inspired by Medusa and wanted to create a character that, instead of snakes for hair, grows light on her head.” 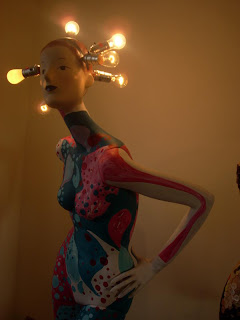 ***
Balli, for as long as he can remember, always wanted to be an artist and has been creating art since he was a child.
“Since I was little I had great interest in drawing and crafting.  Even my handwriting has always drawn people’s attention.  I guess I was born with a hint of art within.  I always see art as a part of my nature or personality.  I associate art in whatever I do.  Basically, art comforts me and gives me an escape.  It’s also my way of seeing things that surround me.  As air has horror of emptiness, I have the horror of the plain nature of things.  Therefore, art allows me to give a vibe to things I find boring.”
***
In August 2005, Balli, his sister, and his mother, who works for the United Nations, moved from their native Tonga, West Africa home to Bronx, New York.   Their first home in the Bronx was inhabited by a good number of Puerto-Ricans, West Indians, and Jamaicans, all of them middle class and friendly.  In 2009, he and his family moved to another neighborhood in the Bronx, Westchester Square, which is inhabited by Italians and the Irish, surrounded by pizza restaurants and small businesses franchising from different industries. 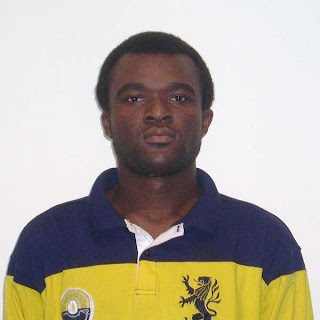 “The feel in the neighborhood we live in now is more classic and quiet.  The people are nice and outspoken. My mother, sister, and I occupy the second floor of a family house.  The space is quite spacious for an affordable place in New York.  It’s composed of a living room and three small bedrooms.”
It is in the corner of this living room is Balli’s studio, which is very bare, with white walls and no other artwork hanging on the walls so as not to be influenced by any other artist; he wants the work to be all his.   It is here that he does his painting, handcrafting, mixing music, drawing, and writing short stories.
***
Sometimes he gets “art-blocked” – and he views this as more time to think of ideas and to focus on his surroundings.
“I’m going through the art-blocked phase now.  Not that I don’t have ideas, but I am not impressed by the few ones that come to mind.  I still look for ideas that are as original as they can be.”
Balli sees ideas in everything from trees, to people, to buildings.  And his art form extends to the realm of photography, where he takes photographs with the city’s environment and its nature as his greatest props. 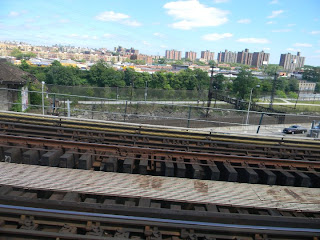 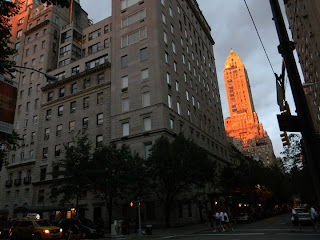 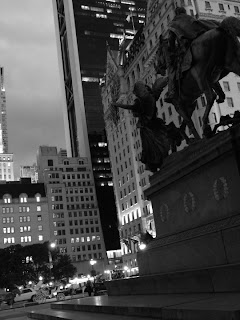 “My artistic spirit is very free.  Anything can inspire me.  I do not like to be stuck on the same theme when it comes to do art.  People inspire and so does nature.”
Balli normally works at night, not necessarily because he is a night owl, but because it is the most quite time of the day; therefore, noise or nature doesn’t distract him.
“I can focus totally on what I am doing.  No music, no beverage affects me at that moment.  While creating I usually get motivated by the joy of what I do. I want to be as genuine as possible through my work. To me that’s the spirit of true art. We don’t have a plant in the house, but there’s a park right around where I live and I can see through the windows trees on the sidewalk.  I anticipate the final result and I can’t wait to get to the point where I sit back and admire my work.”
His step-by-step process varies according to what art form or piece of art he is actually creating.  When he paints a canvas, he first sketches; applies the oil paint or acrylic paint.  If he is doing a painting based on a photograph, he prints the picture on paper, draws a grid on it with little squares, reproduces the grid at a certain scale on his canvas; reproduces the portrait on board; then adds details.  Depending on the art project, the time it take to complete depends; but normally he is able to finish a piece of art from one week to eight weeks, which is how long it took for him to complete the art on each mannequin. 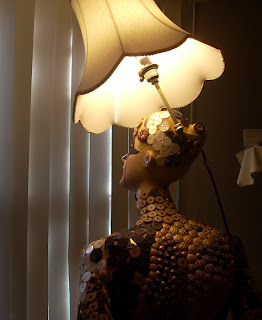 Perhaps the most difficult part of being an artist is to find the time.  Sam works as a janitor at a restaurant, volunteers at a Manhattan shelter, attends church, and is a full time college student majoring in information technology.  He also plans on pursing studies in mechanical engineering, so he can get opportunities to mix art and science together.
Balli dedicates his weekends to creating art and spending time with his friends, who often inspire him to artistic ventures.  One of those friends is Lyn Baily. 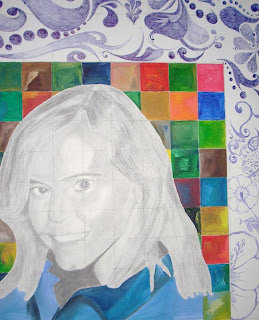 “We just had this instant connection and ever since we remain great friends. No matter how opposite our culture is, we get along so well as if we grew up together. It is a friendship that is meant to be. She’s a wonderful person and I dedicated this painting to her.”
Perhaps the piece of art that represents his faith is the candle with Jesus’ face.  He got the idea when he visited his friend, who had a candle burning on his dining room table.
“And as the candle was burning, it looked like three people standing in a circle. That’s how I get inspired and I pulled out my camera and took a shot. Then on my computer I photo-shopped with my digital pen the face of Jesus and two other people standing at his side and forming a circle around a light. I made it look as if they were praying around a fire. It’s a very spiritual picture to me. In the new future, I am going to be working on similar projects.” 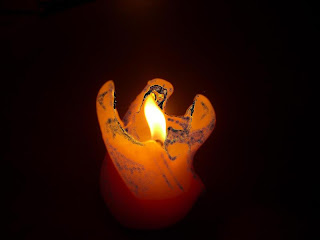 Balli holds the belief that every one is an artist to some degree because each person has his or her own opinions about the world, and things each individual deals with. 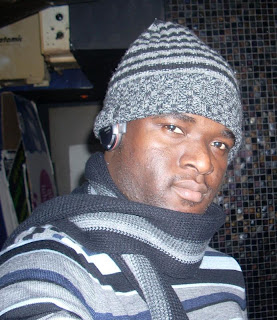 “The difference between the artist and a regular person, as I see it, is that the artist materializes his/her opinion.  I overcome art-blocking by just freeing myself from the stress of having no ideas.  I just move on with life until something convincing strikes me.”
Email Anicet Balli at pilisamb@yahoo.com for more information.