CRC BLOG ANALYSIS: The Gospel in Dorothy L Sayers: "Under A Microscope" 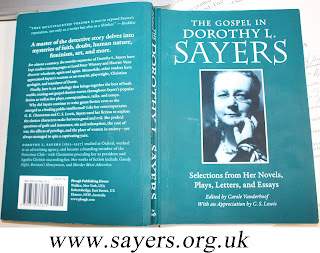 CRC Blog Analysis on The Gospel In Dorothy L Sayers:  Selections from Her Novels, Plays, Letters, and Essays
Under A Microscope 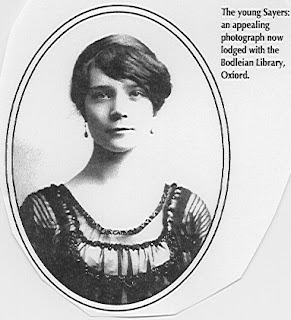 Dorothy L. Sayers was English playwright, scholar, murder mystery writer and Christian apologist.  She won a scholarship to attend Somerville College in Oxford (Below) where she focused on Modern Languages and Medieval Languages, graduating with high honors in 1915. 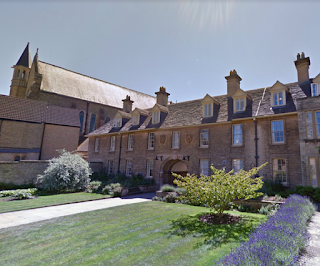 Her first two books to be published were two poetry collections:  OP.I in 1916; and Catholic tales and Christian Songs (Below) in 1918. 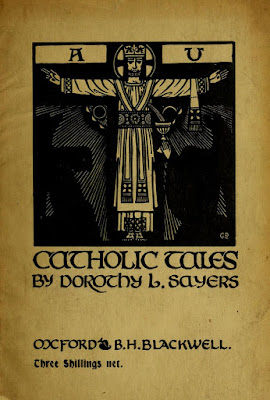 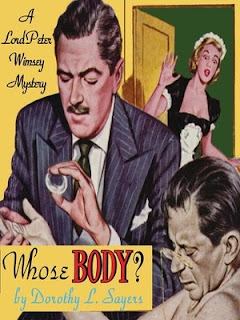 But she didn’t gain accolade until 1923 with the publication of the detective mystery novel WHOSE BODY featuring hero protagonist Lord Peter Wimsey who would be the leading hero protagonist in 16 novels and numerous short stories published between 1923 to 1972. 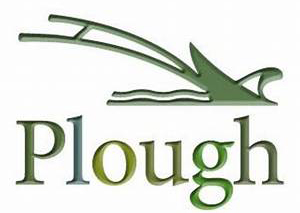 The goal of Plough Publishing was to read and research all of Dorothy  L Sayer’s works, place each work under a microscope or magnifying mirror in order to bring out the gospel aspects from all of her works including the non-secular and the secular.

Plough Publishing House editor Carole Vanderhoof to do this feat and the result is the fifth book in the THE GOSPEL IN GREAT WRITERS series, The Gospel In Dorothy L Sayers:  Selections from Her Novels, Plays, Letters, and Essays; edited and with an Introduction by Carole Vandherhoof with an appreciation by close friend C.S. Lewis. 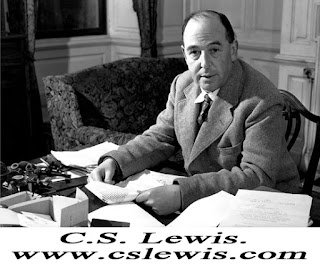 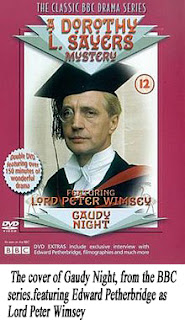 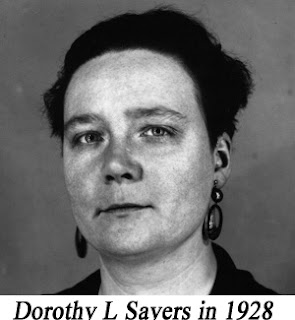 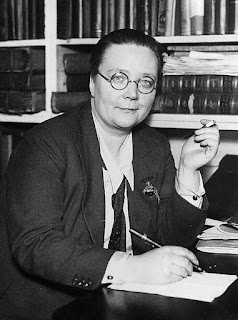 The reader should read with caution:  this is a book that gets to the very core of every theme of each chapter.  It is the kind of book that will appeal to researchers, educators, Christians, theologians, and even atheists, and actually every one – since each of these chapter themes touches on the very thing that makes us human beings – and spiritual beings.

*Below are excerpts from each of the themed chapters that tries to define or illustrate the very meaning of each theme. 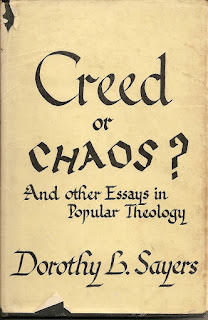 Chapter One:  Whose Body?/ Conscience
I well remember how an aunt of mine, brought up in an old-fashioned liberalism, protested angrily against having continually to call herself a “miserable sinner” when reciting the Litany.  Today, if we could really be persuaded that we are miserable sinners – that the trouble is not outside of us but inside of us, and that therefore, by the grace of God, we can do something to put it right – we should receive that message as the most hopeful and heartening thing that can be imagined. -From an address Sayers delivered in May 1940 titled “Creed or Chaos?” 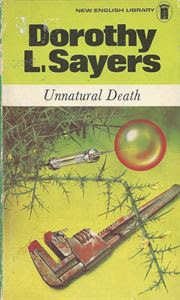 Chapter Two:  Unnatural Death/ Sin and Grace
“Sin is the intention, not the deed.  That is the difference between divine law and human law.”
-Lord Peter Wimsey speaking to vicar Mr. Tregold in the novel Unnatural Death

Chapter Three:  The Unpleasantness at the Bellona Club/ Covetousness
Covetousness has gone forward and never looked back.  It has become a swaggering, swashbuckling, piratical sin, going about with its hat cocked over its eye, and with pistols tucked into the tops of its jack-boots.  Its war-cries are “Business Efficiency!” “Free Competition!” “Get Out or Get Under!” and “There’s Always Room at the Top!” It no longer screws and saves – it launches out into new enterprises; it gambles and speculates; it thinks in a big way; it takes risks.
- From the talk “The Other Six Deadly Sins.” 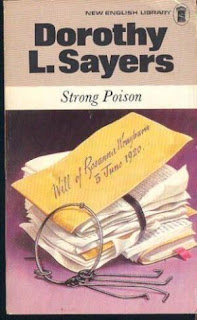 Chapter Four:  Strong Poison/ Forgiveness
Therefore I swear, O father and God,
I swear by Thy might throne,
With the blood that was shed on Calvary
I bought them for Mine own;
It shall dye them with shame and scarlet,
It shall sear them as burning coals,
For they spilt and trampled it into the mire,
And it shall save their souls
-Jesus speaking in “Justus Judex”

Chapter Five:  The Documents in the Case/ Judgment
The word “punishment” for sin has become so corrupted that it ought never to be used.  But once we have established the true doctrine of man’s nature, the true nature of judgment becomes startlingly clear and rational.  It is the inevitable consequence of man’s attempt to regulate life and society on a system that runs counter to the facts of his own nature.
In the physical sphere, typhus and cholera are a judgment on dirty living; not because God shows an arbitrary favouritism to nice, clean people, best because of an essential element in the physical structure of the universe.
-From “Creed or Chaos?”

Chapter Six: The Dogma is the Drama/ Belief
“Wasting my time,” said Hoskyns.  “I told them exactly what they put into my mouth.  You’re right, Jim, they’d believe anything.  “The elixir of life – that’s what they really want to get hold of.  It would look well in a headline.  If you can’t give ’em a simple formula to cure all human ills and explain creation, they say you don’t know your business.”
“Ah!” said Perry, with a twinkle of the eye, “but if the Church gives them a set of formulae for the same purpose, they say don’t want formulae or dogmas, but just a loving wistfulness.”
-from Documents in the Case 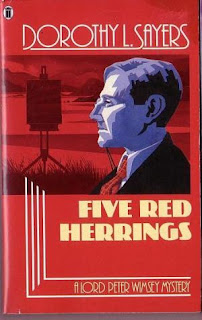 Chapter Seven:  The Five Red Herrings/ Pride
In one way there is so much to say about Pride that one might speak of it for a week and not have done.  Yet in another way, all there is to be said about it can be said in a single sentence.  It is the sin of trying to be as God.
- 1941 talk “The Other Six Deadly Sins”.

Chapter Eight:  Have His Carcase/ Despair and Hope
LAZARUS:  Rabbi, it is true.  I feel it in you too – that immense vitality at which a man may warm himself as at a fire.  In your presence, I think, no one could easily yield to death – not even I.  yet I am not like Mary.  I hold to life only with one hand, and not with a very strong clasp.  If death came to me quietly one day when you were not beside me, I should not struggle, but slip away with him in silence and glad to be go.

JESUS:  Do you love me so little, Lazarus?
-In the Light and the Life, play seven of The Man Born to Be King 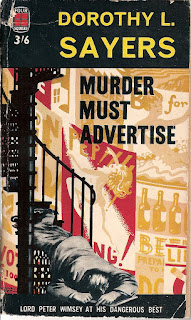 Chapter Nine: Murder Must Advertise/ Greed
If we make ourselves greedy and grasping tyrants of the earth – ravishing and not serving it -  it takes its revenge in waste lands, barren soil, flood, drought an dearth.  Every time we upset the balance of natural forces by over-cultivation, either of earth, animals or what-not, we seem to come up against some law which sends back to us in famine or disease the catastrophes we tried to avoid.
-From a letter 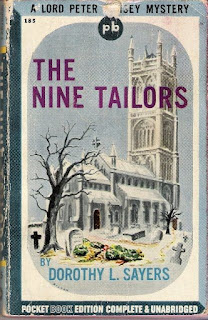 Chapter Ten:  The Nine Tailors/ Creativity
The Architect stood forth and said:
“I am the master of the art:
I have a thought within my head,
I have a dream within my heart.

“Come now, good craftsman, ply your trade
With tool and stone obediently;
Behold the plan I have made-
I am the master; serve you me.
-Jesus speaking in the poem “The Makers” 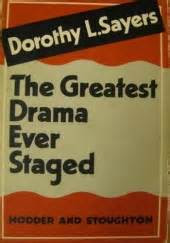 Chapter Eleven:  The Greatest Drama/ Resurrection
The Christian faith is the most exciting drama that ever staggered the imagination of man – and the dogma is the drama.
From the Newspaper article “The Greatest Drama Ever Staged is the Official Creed of Christendom” 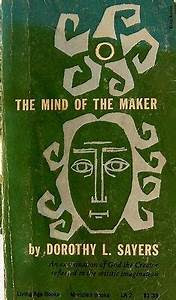 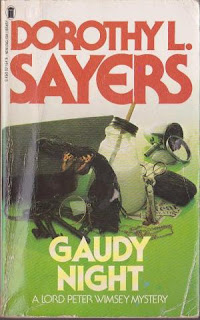 Chapter Thirteen:  Gaudy Night/ Work
I believe, however, that there is a Christian doctrine of work, very closely related to the doctrines of the creative energy of God and the divine image of man.
-from the talk “Creed or Chaos?” 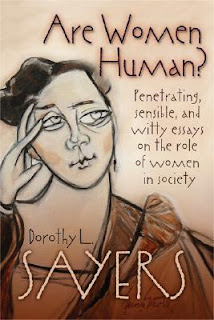 Chapter Fourteen:  Are Women Human?/ Equality
When I was asked to come and speak to you, your Secretary made the suggestion that she thought I must be interested in the feminist movement.  I replied – a little irritably, I am afraid – that I was not sure I wanted to “identify myself,” as the phrase goes, with feminism, and that the time for “feminism, in the old-fashioned sense of the world, had gone past.  In fact, I think I went so far as to say that, under present conditions, an aggressive feminism might do more hard than good.  As a result I was, perhaps not unnaturally, invited to explain myself.
-from the lecture address “Are Women Human?” 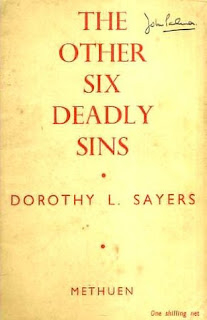 Chapter Fifteen:  Creed or Chaos?/ Envy
Hand in hand wit Covetousness goes its close companion- Invidia or Envy, which hates to see other men happy.
-From “The Other Six Deadly Sins” 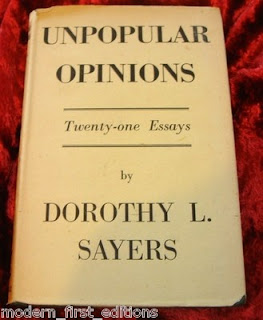 Chapter Sixteen:  Unpopular Opinions/ Faith
The law is framed on the assumption that my life is sacred; but upon my word I can see no sanction for that assumption at all, except on the hypothesis that I am an image of God-made, I should say, by a shockingly bad sculptor.  And if I see no sanctity in myself, why would I see it in Finland?  But I do.  It seems altogether irrational.  All the same, I still have the sense of liberation.  “Fall into the hand of God, not into the hand of economic humanity.” -from the private diary of Sayers’s protagonist Lord Peter Wimsey 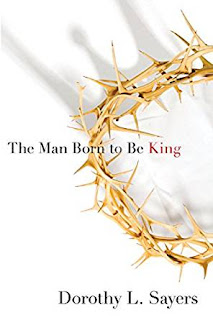 Chapter Seventeen:  The Man Born to Be King/ Incarnation
I feel sure that it is in the interests of a true reverence towards the Incarnate Godhead to show that His Manhood was a real manhood, subject to the common realities of daily life; that the men and women surrounding Him were living human beings, not just characters in a story; that, in short, h was born, not into “the Bible,” but into the world.
-Dorothy L Sayers outlining her overarching goal of writing the nativity play He That Should Come. 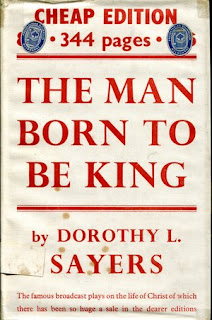 Chapter Eighteen:  Kings of Sorrows/ The Cross
1ST SOLDIER:  Stretch your legs.  I’ll give you the king of the Jews.
2nd SOLDIER:  Hand me the mallet.
JESUS:  Father, forgive them.  They don’t know what they are doing.  (His voice breaks off in a sharp gasp as the mallet falls.  Fade out in the dull thud of hammering). . .
-crucifixion scene from The Man Born to Be King. 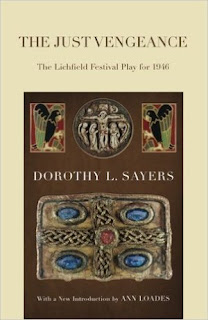 Chapter Nineteen:  The Just Vengeance/ Images and Symbols
PERSONA DEI:  I the image of the Unimaginable
In the place where the Image and the Unimaged are one,
The Act of the Will, the Word of the Thought, the Son
In whom the Father’s selfhood is known to Himself,
I being God and with God from the beginning
Speak to Man in the place of the images.
-from the play The Just Vengeance 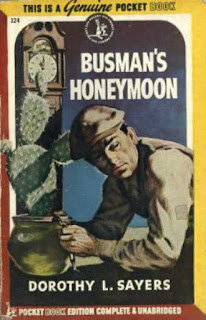 Chapter Twenty:  Busman’s Honeymoon/ Time and Eternity
“How can a man be born when he is old?” asked Nicodemus (John 3:4).  His question has been ridiculed; but it is very reasonable and even profound.  “Can he enter a second time into his mother’s womb and be born?” Can he escape from Time, creep back into the comfortable pre-natal darkness, renounce the value of experience. The answer makes short work of all such fantasies.  “That which is born of the flesh is flesh, and that which is born of the Spirit is spirit.”  The spirit alone is eternal youth; the mind and the body must learn to make terms with Time.
-from a newspaper article. 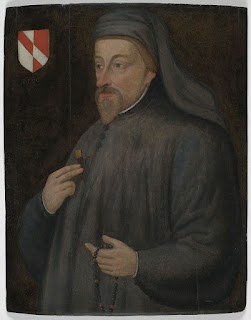 In the closing of the book C.S. Lewis writes “A Panegryic for Dorothy L Sayers” and C.S. Lewis compares Dorthy L Sayers’s body of work to that of Chaucer (Right), Cervantes, Shakespeare, or Moliere and gives her his expert opinion on her as a writer: “I have no idea that, with a very few exceptions, it is only such writers who matter much in the long run.” 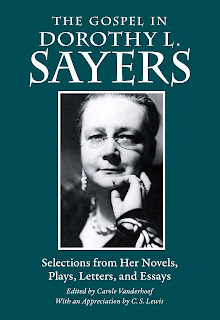 The Gospel In Dorothy L Sayers:  Selections from her Novels, Plays, Letters, and Essays should be in every reader’s library.

Posted by Chris Rice Cooper Blog at 7:33 AM