#65 Backstory of the Poem "Summer 1970, The University of Virginia Opens to Women in the Fall" by Alarie Tennille 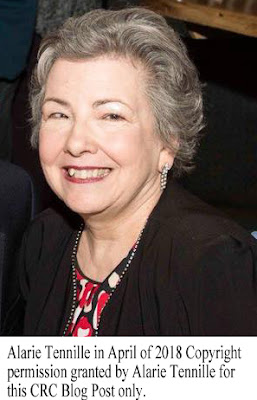 #65 Backstory of the Poem
“Summer 1970, The University of Virginia Opens to Women in the Fall”
by Alarie Tennille

Can you go through the step-by-step process of writing this poem from the moment the idea was first conceived in your brain until final form? I can’t claim full credit for conceiving this poem. Being in the first class of women at the University of Virginia was certainly life-changing, viewpoint-changing, and the beginning of feminist struggles I’ve faced since. I write a lot of poems about childhood, but I hadn’t touched this pivotal point in my life. A writer friend came up to me at the end of a poetry reading and asked, “Why haven’t you written any poems about UVa?” 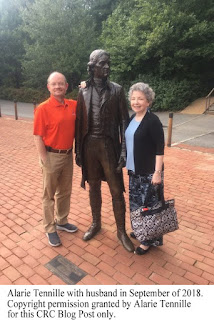 That’s not easy to answer. I suspect I still haven’t sorted it all out. It so changed my world. I didn’t want to write about the anger, frustration, bullying, sexism, and fear. Those were products of the times, not the fault of the University, which I dearly love. I’m grateful for my top-notch education, the life-long friends I made there, and for meeting my husband, a fellow English major. 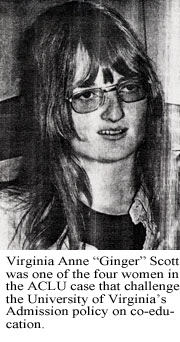 Nevertheless, my friend’s question got me thinking about how to tackle the topic. I decided to begin at the beginning. My older brother had gone to UVa and repeatedly told me I couldn’t. I don’t think that was onery big brother talk, but his attempt to prevent heartbreak down the road. He was delighted when I could attend, thanks to a lawsuit brought by women turned away. 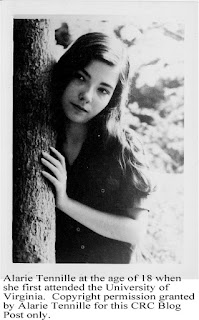 In my poem, I tried to approach the future with the coming of age innocence I employ in my poems of childhood. I think this poem keeps the future wrapped in mystery, as it always is, and allows the reader to imagine what it would have been like to face discrimination. 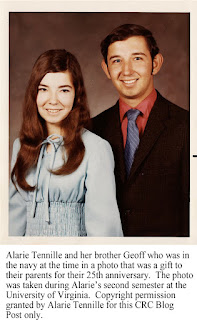 Would I do it all again? Yes, but at the time I had no idea of the problems I’d face. I’d been the only girl in my high-school trig class and enjoyed that. I never realized that faculty members and upper classmen would confront me to say, “No one wants you here.”
Where were you when you started to actually write the poem? And please describe the place in great detail. Almost all my poems are written at night or in the wee hours of morning, and the hours have become more and more wee since I retired in 2012. I use magic notebooks that never seem to fill up. I select them with great care. Each one lasts me 3-4 years, because I write my first drafts and very little else in them. They’re lovely, hard-cover, 8.5 x 11 inch, spiral-bound notebooks that lie flat. Although my poems tend to be short, I have large handwriting and don’t like writing on a cramped page. 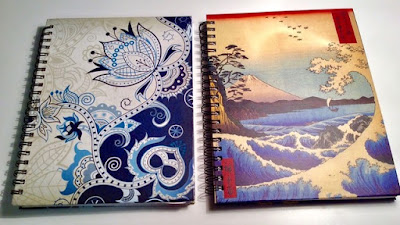 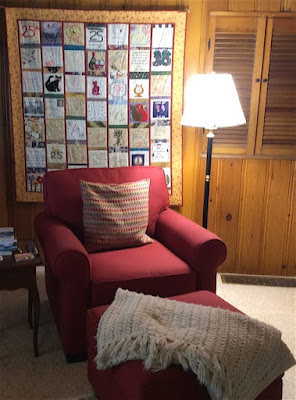 I try to get as comfortable as possible. This means writing by a good lamp, feet up, in my family room. I usually have an afghan on my lap, sometimes a cat, too, which is NOT convenient, but what if they’re loaning me their creative powers? Writing poetry is a bit mystical after all. Beside me is a mug of tea or a glass of wine. 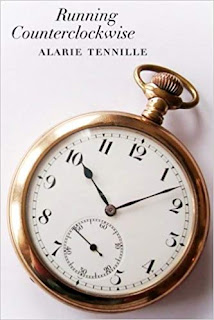 Time stops or else I slip into another dimension. I have no idea whether I’ve been writing ten minutes or three hours, which is why I like to start late when I have no appointments or phone calls to interrupt my writing trance. 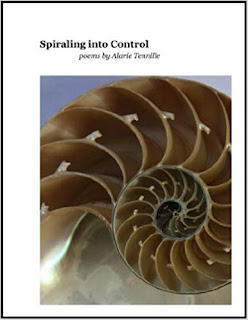 I use the term “first draft” loosely. I make additions, changes, even new starts until I can barely read what’s on the page. Then I move to the computer, type it, and add it to my critique group folder. I revisit and edit it many times over until I feel it’s ready for the group. 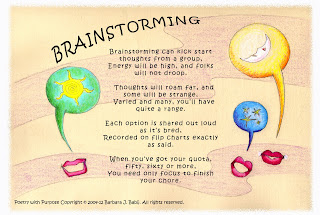 My ritual begins before the writing, however. I rarely sit and stare at a blank page. I generally carry the idea for the poem around in my head for a few days, so that I have some idea of how to begin. Sometimes the title comes first, as it did for this poem. More often I will add it later or change whatever I first named it. 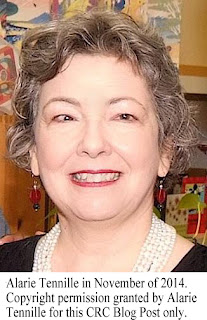 What month and year did you start writing this poem. Judging from the publication date, I believe I wrote this poem in the fall of 2014. I try to keep meticulous records of when and where I submit my poems, when I get a response, and the publication date. That’s more than enough busy work for me. I don’t date when I start or finish writing the poem. 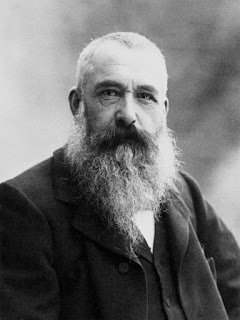 How many drafts of this poem did you write before going to the final? I have no idea how many drafts this poem took. In a sense, it was over 40 years in the making. I don’t count drafts or dissect my work habits. So much of my writing seems to come from a subconscious state that I don’t want to mess that up. In a poem about Claude Monet, I wrote, “True genius is making it look easy,” and I try to preserve the illusion that it comes easily to me. 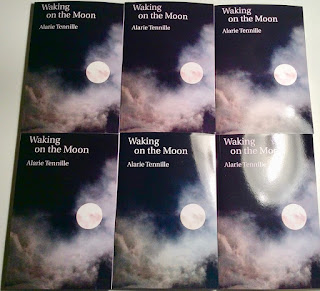 Were there any lines in any of your rough drafts of this poem that were not in the final version? And can you share them with us? There are always lines or at least words that I cut. Although I can’t find my original draft of this poem, I found something way more embarrassing: a draft of a ghastly poem on the same topic that I apparently set aside. It confirms why I do not show my rough drafts. It’s a rhymed verse titled “Going Coed,” with the epigraph, “Why I hate conversations about the good old days.” Way too heavy handed. This is a good time to thank my critique group (thanks Tina and Teresa!). They will tell me when I’m speeding down the road of self-delusion.

What do you want readers of this poem to take from this poem? I want readers to be entertained, touched, or a bit shaken, depending on how any poem of mine touches their lives. I chose to leave this poem open-ended, so women or other minorities can relate it to what they’ve experienced and maybe bullies will think about their moms, sisters, and daughters before they degrade women. I also want to remind everyone about our not-so-distant history. We need to preserve and build on the gains made toward equality. We’re now saying, “I believe her,” because women are still not being heard or credited. 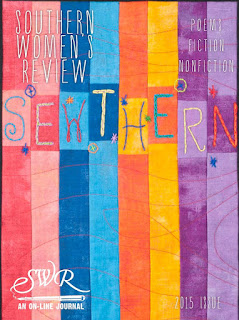 Has this poem been published before? And if so where? “Summer 1970, The University of Virginia Opens to Women in the Fall” was first published by Southern Women’s Review in February 2015. It also appears in my latest poetry collection, Waking on the Moon, available on Amazon. 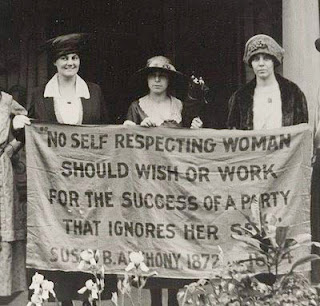 Which part of the poem was the most emotional for you to write and why? I tried to understate the emotion and let it come through in the sense of foreboding at the end. It’s easy for others to see a civil rights pioneer as a hero or a martyr, when most of us are just seeking our fair share of what life offers. I was an A student who wanted to go to my prestigious state university and become a professional writer. I didn’t name my hardest emotions, like fear for my safety. 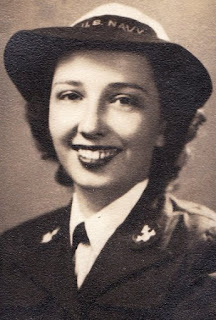 My mother (Left) joined the Waves in WWII and was a working mom in the 50s, when that was frowned on. She tried to instill confidence in my abilities and the belief I could do whatever I set my mind to do. I had no idea it would be so hard emotionally. I think she did know and was wise not to tell me. I’m her daughter, after all. Telling me, “You can’t,” is the surest way to make me prove you wrong.

Anything you would like to add? Thank you, Christal Ann Rice Cooper, for this chance to share my voice and craft. (Below:  Alarie Tennille Web Blog Logo)

Summer 1970, The University of Virginia
Opens to Women in the Fall

Mama calls me a pioneer. I call
me a student - tagging along
after my older brother like always,
ignoring his taunts. You can’t
come here. Somehow I knew
I would.

At thirteen, I fell in love
with Thomas Jefferson’s Rotunda
and vistas of the Blue Ridge.
I’m not trying to make history,
just taking my place in it.

Brave? No, timid and half blind.
Every stranger and new school
scares me. That’s life.
I don’t know I’ll need extra
courage. That will come later. 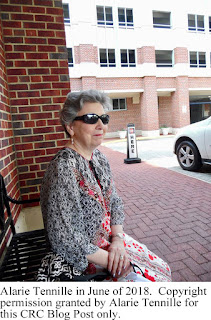 Alarie Tennille graduated from the University of Virginia in the first class admitting women as a Phi Beta Kappa. She has now lived more than half her life in Kansas City, Missouri, where she serves on the Emeritus Board of The Writers Place. Alarie’s poems have appeared in over 50 journals, including Poetry East, Midwest Poetry Review, Southern Women’s Review, English Journal, and I-70 Review. Her first full-length collection, Running Counterclockwise, was first runner up for the Thorpe Menn Award for Literary Excellence. Her newest poetry collection is Waking on the Moon (available on Amazon). Please visit her at alariepoet.com and sample her new blog.
http://alariepoet.com/