Guest Blog Post by Wanda Lea Brayton on Mark A Murphy's "TO NORA, A SINGER OF SAD SONGS" 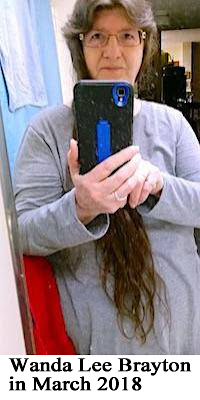 
An analysis of Mark A Murphy’s To Nora, A Singer of Sad Songs

"I will bring you my poems
with bread and flowers
and we will make our bed in fields of wheat."
— excerpt from "My Love is in America"

From the very first lines of the very first poem, I was captivated by the voice within. In "Nocturne", I found one of my most favorite phrases ... "tender mercies". How could I not then follow the path that gleamed before me? I felt an immediate kinship, as my mother's only sister's name was Nora, too. Would I find her dwelling within these pages? Indeed, I would and I did, even though she left this physical world when I was still a child — 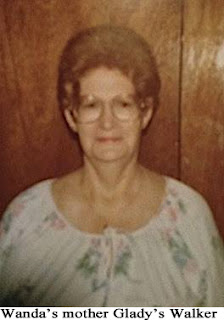 a child who could only know her life through the occasional mention of her name, the sorrow in my mother's eyes. Becoming a poet let me understand her secret thoughts even more, as by then I had more than a few of my own burrowed beneath my flesh. 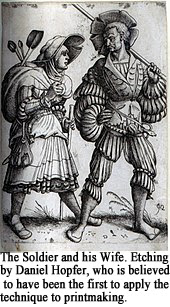 The poem "Butchers and Tombs", reminiscent of an ancient soldier and his beloved, was a poem worth reading with intentions of memorizing its cadence, its promise, its eternal devotion and its depth. It says far more than the actual words reveal, if one knows where to look and how to listen to silence, how to measure a stone by recognizing its memories of the mountain to which it was once attached. 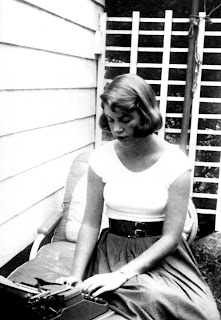 The poem "At the Grave of Sylvia Plath" (Left) caught my attention, too. Many people, including myself, have been influenced and inspired by that haunted voice in the years since she perished by her own hand, unable or unwilling to continue to inhale, exhale, step forward or step back. My own poems seem to both chastise and console her for giving up all of those things which others strive to attain for a lifetime ... many without being rewarded with even a glimpse of what she knew. I am angry that she succumbed to those damnable shadows, that she ever surrendered, for whatever reasons she may have thought reasonable, even justifiable — I am angry at the cause and its dark accomplishments, at her treatment and her mistreatment. 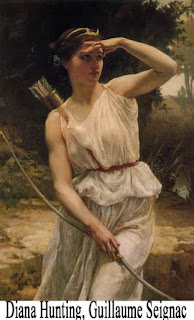 I am especially angry and bereft because the same shadows reached out unexpectedly and stole my favorite sister from me ... Diana, the huntress, who laid down her bow with resignation, with regret, with sorrow too deep to measure. Diana, she who was given my Aunt Nora's middle name to carry throughout her life.

Artists are all too often known to be "poor", but only in a monetary sense. In every other definition of the word, we are rich beyond measure, for we know the depths of love, the breadth of desire, the absolute grace and silent beauty of a setting sun, the warmth of a loved one taking our hand in theirs. We are aware of our lives and choose to live them, rather than to merely survive them. In this way and for this reason, we can never truly consider ourselves to be poor in any sense of the word — and for those who might choose to pity us for our lack of monetary wealth, let them know that we have had rich lives of the mind, if not of the body. I would not change my circumstances if it meant I had to also give up my art, my life's work. The trade-off simply isn't worth considering. 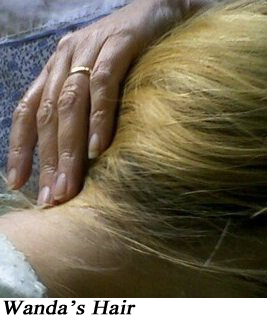 In the title poem, "To Nora, A Singer Of Sad Songs", I found certainty, sincerity, honesty, truth ... and a bittersweet acceptance of sorrow, as well. It spoke of life, laughter, love, memories once thought to be forgotten, but found again in a drawer, containing a lock of her hair. How the tears must have moved, a river borne of sudden discovery, of remembrances almost too vivid to bear. 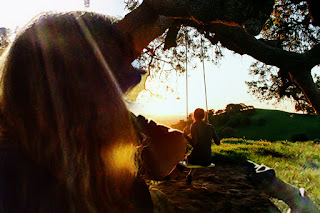 In the poem "Immolation", there is a savagery surrounding this beloved woman, wounding her beyond any ability to tolerate it, yet she does tolerate it and more, and she does so with an unimaginable sense of courage, an unwilling bravery that none of us think ourselves capable of ... and yet, until the very moment comes, we do not know how very strong we surely are, how much we can truly endure. That is Life's gift to us, this lack of knowledge until we need it, the ability to endure and survive the unthinkable. 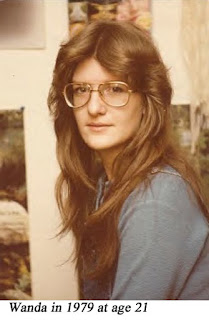 The series of single-sentence vignettes titled "In Time's Wake" made me think of Tagore's beautifully poignant and profound lines scattered throughout his book, "Fireflies".  I discovered his book in the late 1970's and turn to it even now. It is timeless and passionate, fierce and wise, as is this book of poetry dedicated to Nora. 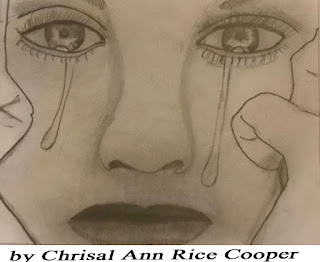 In the poem "The Muses Run Away", I was confronted by my own experiences within these lines:

"but nothing can stop the implacable heartache
of a soul bent on self-destruction." 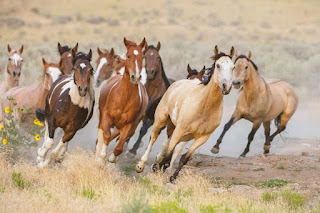 In "Gaiety Among the Newly Wed", I found innocence, tenderness, hope, even naivete ... and the thundering hooves of love's wild horses running without reigns to hold them back from the wind. 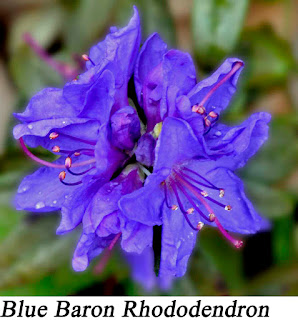 The entirety of the poem "Blue November" made me ache with empathy and weep with understanding, especially with its final line, "when November rain returned with its idle words." 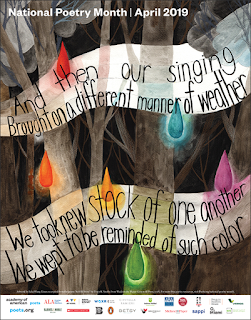 Within the piece "Serenade", the poet declares that he is not an alchemist. However, I would have to disagree, for I observed the shimmering of precious metals within those inked letters. 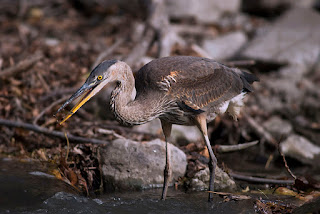 In "The Outlaw's Song", there are unwritten volumes between each pause, every stanza. I quietly listened to their murmurs and was enchanted by their quietude. 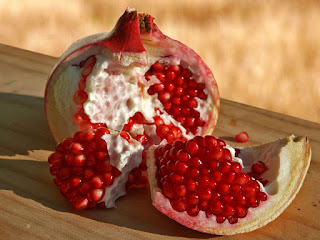 In the poems "My Love" and "Shadowless Seas", I found a heart-wrenching confessional so raw, so real, so private, I felt I was an intruder in someone's deepest wells of thought. In "Existence", I found the follies of youth as they evolved into the treasures of a man now grown. In "Pomegranate", I found mythology and mystery unveiled and revealed as truth. 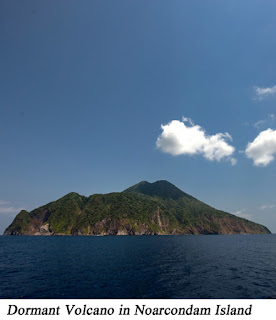 In Part II, the first poem "Towards the Visible and Indivisible" is a quiet and subtle volcano. It is a dirge one would not expect, yet still would not be completely taken by surprise, either. It contains hollows and dungeons, caverns and glaciers, gardens and barren soil.
In the poem "The Light", there is a sense of sorrow, of devotion, of wanting to repair what is irreparably broken. Yet, there is a gathering of hope, even now.

"but as Jupiter and Venus pass by the moon
in their ballet of eternal, convoluted
motion, we will sing of the light in all things." 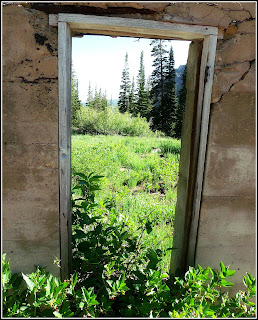 In the poem "Destitute", the poet's voice trembles noticeably as he bemoans the distance between his beloved and their severed embrace. One can sense his fear, his fitfulness, his agonizing over the unending horrors caused by his loved one's absence.

"My love endures the ruination
of our century singing in empty doorways.
She came into my life singing her rhapsody in blue
and fades away in a fog of lamentation."

This book is an elegant tribute and a delicate homage to love — to its infinite light, its unending shadows, its chiaroscuro moments awaiting dawn, yearning for dusk. Its strength lies in its utter openness — its contents enclosed by a soul reaching out to another in the ways of the lover to his beloved, speaking a secret language only they can decipher, yet others may gather many delicate fragrances from. To declare that it is beautifully and soulfully written is an understatement. One must read it for themselves to understand the nuances, the ambience, the tonality and hues of the remarkably diverse palette they hold within their hands. They should not then be surprised at the butterflies that soar from its pages, straight into their hearts, where they shall create and anchor their chrysallis, where they shall build their futures, where they shall breathe freely, however briefly they may. This is not a book one shall easily forget — quite the contrary. Having known the intimate loss of loved ones myself, it is a book I shall return to, again and again, for wisdom, for solace, for remembering what it is that makes us human beings capable of such love, such selflessness, such an incredible giving of our most private selves to one another. I recommend that each reader consume it slowly, savoring its sound, its taste, its delicate fragrance, its wild and untamed heart. 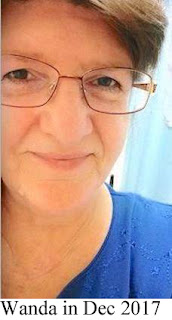 Wanda Lea Brayton is a lifelong scholar and a former college librarian who has been writing poetry since 1973 and columns since 2004.  She’s done extensive editorial work and has assisted others with compiling and promoting their own manuscripts.  Her poems have been published by Clackamas Literary Review, Main Street Rag, World Poetry, Hudson View Poetry Digest, The Pedestal Magazine, Poetry Life & Times, Oak Bend Review, Aquillrelle, Stone Voices, an other anthologies. 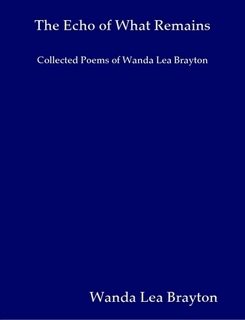 She is a featured poet on a number of websites.  She is the author of two books of poetry:  the Echo of What Remains Collected Poems of Wanda Lea Brayton” and A Beautiful Rumor Selected Poems. 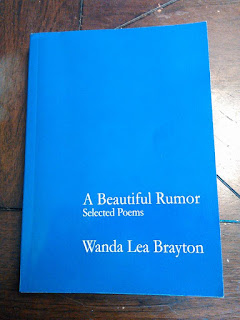 Posted by Chris Rice Cooper Blog at 9:51 AM