****All photos are given copyright permission by Donna Spruijt-Metz for this CRC Blog Post only unless otherwise noted. 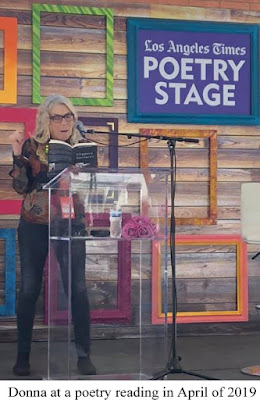 #97 Backstory of the Poem
“The New Science of Slippery Surfaces”
by Donna Spruijt-Metz
Can you go through the step-by-step process of writing this poem from the moment the idea was first conceived in your brain until final form? The poem I would love to share is the title poem for the chapbook. The poem is entitled “The New Science of Slippery Surfaces,” and it was published in Poetry Northwest. Here is a link to it online
https://www.poetrynw.org/donna-spruijt-metz-new-science-slippery-surfaces/

According to my hard drive, the first version of that poem was written on March 5, 2017. It was inspired by this blog that I read – I have no idea how I found the blog, I honestly don’t read a lot of blogs, but for my day job I do read a lot of science so I must have been looking for something. And I found this delight. Here is the blog: https://www.wired.com/2016/07/super-slippery-coatings-good-way-ketchup-bottles/ 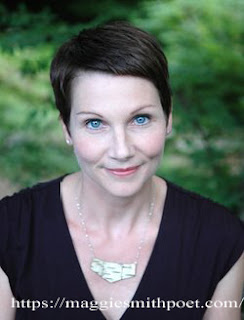 It just brought this poem bubbling up—it reminded me of past things, and taught me new things, about our world, and about myself.  At the time I was putting together the first draft of the chapbook, and it just had this gaping hole in it, and Maggie Smith was going to read it and had a specific slot in her schedule so I had to get it to her within a set timeframe.

Again, according to my hard drive, which is what I use as a brain – I plunked the first draft of the poem into that first draft of my chapbook (which has, by the way, been through a gazillion drafts) on March 8, without any edits. Unlike me, but there was this hole that had to be plugged. Maggie took it out of the chapbook, felt it wasn’t ready or right, but she was kind enough to edit it. She suggested a major reordering of the poem, and did some serious magic with line breaks. I took her suggestions into account and revised the poem and sent it back to her. This time she liked it, and made a few more suggestions. I revised it a final time and I put it back into the chapbook.

I workshopped the poem at Bread Loaf in the summer of 2017 with Rick Barot, who is a marvelous teacher. Some interesting arguments ensued in the group about whether science belongs in poetry. Rick and one other participant, Preeti, defended it with vigor. It stayed itself. No more changes. The chapbook went through several revisions, though, just me tinkering and tinkering and tinkering, having poem emergencies, sending poems back and forth to good poet friends, in particular Crystal Stone and Roy White, and in the end, this became the title poem for the chapbook. So, four revisions in all.
Where were you when you started to actually write the poem? And please describe the place in great detail. I was at home, in my study. It was right before we revamped the interior. For years, my study had been home to my mother’s Steinway B baby grand piano. I don’t play piano but I was a professional flutist in my first life, and so I used it for understanding harmonies, other people accompanied me sometimes, or we jammed. 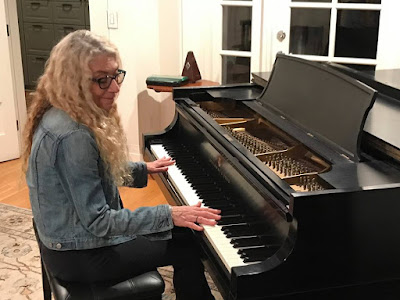 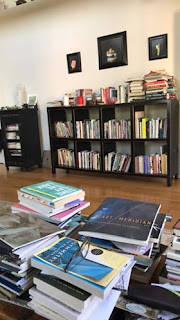 But after we re-immigrated to the United States from the Netherlands, and I was working full time at the university as a scientist and writing poetry in earnest, I finally put down the flute, the demanding task mistress that she is. And then I finally let go of the piano—and along with her, my mother. But when I wrote this poem I was at my big white desk overlooking my mother’s big black piano, windows looking out over our green back yard in Southern California. 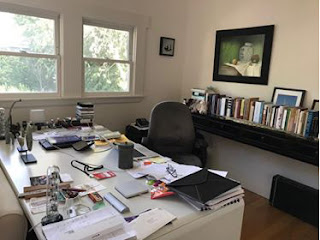 Were there any lines in any of your rough drafts of this poem that were not in the final version? And can you share them with us? There were several lines that got chopped. The one that I was a bit sorry to see go pertains to the student wrestling with the siracha, but it really didn’t fit any more. The line was: ‘does he know what I know?’ 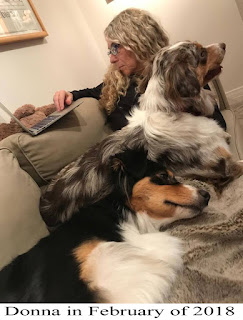 What do you want readers of this poem to take from this poem? How precious and slippery time is—how it slips through us—how science is making everything faster and more slippery—and how precious and slippery time is with whoever we love—in this case my child—but slippery also in another sense—the sense of how I have to be vigilant, always vigilant, to find the balance between what I want and what my loved ones need. 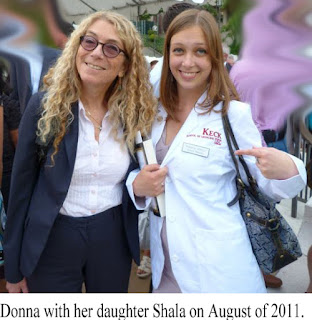 Which part of the poem was the most emotional of you to write and why? When the poem turned towards my daughter—it was a surprise to me—and I still tear up sometimes when I read it in public.

Anything you would like to add? Poetry is necessary!! Thank you again for paying attention to it.

The New Science of Slippery Surfaces

is revolutionizing containers.
Oil will slide through pipelines,
glue will flow, bacteria will be unable
to find purchase in stents and IV lines.
Through my one summer
as an incompetent waitress
I watched people trying to slap
ketchup out of bottles, then
use a knife. Here in the coffee shop,
I wait for you and watch
a student at the next table wrestle
with the Sriracha. And you,
my daughter, in your doctor’s coat,
your wedding ring, sit down
across from me. I try not to want
too much. Consider all the ways
we try to get things out
that seem to want to stay in,
as if there were a will to it. 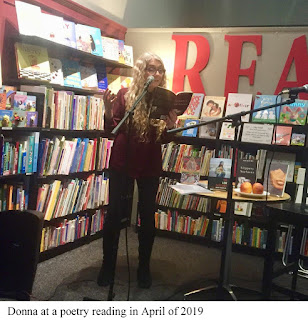 Donna Spruijt-Metz is a poet, translator, and Professor of Psychology and Preventive Medicine at the University of Southern California, where she directs the USC mHealth Collaboratory. Her first career was as a professional flutist. She received two MFAs in Flute, one from California Institute of the Arts, and the other from the Royal Conservatory in Den Haag, The Netherlands. 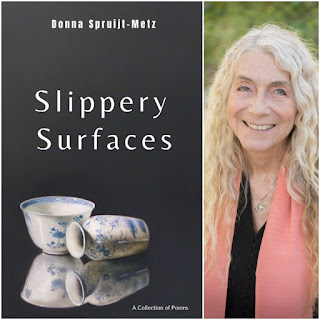 While performing as a professional flutist, she received a PhD in Psychology and Medical Ethics and Adolescent Health from the Vrije Universiteit in Amsterdam.
After her family re- 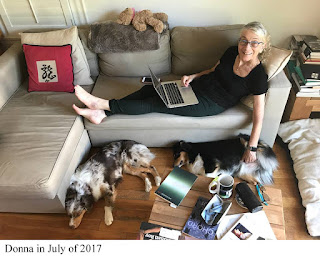 immigrated to the United States, she received an MFA in Creative Writing from Otis College of Art and Design. She started Rabbinical School, but finally abandoned it for poetry.

Her work has appeared or is forthcoming in venues such as Vinyl, The Rumpus, Occulum, Naugatuck River Review, Juked and Poetry Northwest. Her chapbook, Slippery Surfaces, is from Finishing Line Press in March, 2019.


Posted by Chris Rice Cooper Blog at 9:58 AM