All Images are given copyright permission granted by Ned Balbo for this CRC Blog Post only unless otherwise noted. 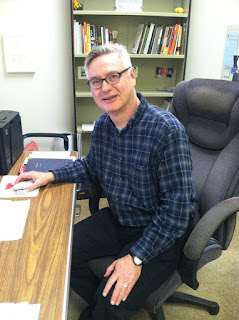 Can you go through the step-by-step process of writing this poem from the moment the idea was first conceived in your brain until final form? I’m not sure when exactly I conceived the idea for “Rare Book and Reader.” I’ve carried the memory that lies at the center of the poem since the day I walked into the Vassar library’s rare book room as a first-year college student and asked to see an original volume of The Prophecies by Nostradamus. 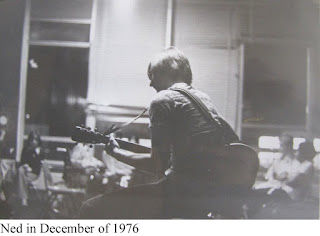 It was around 1976 or so that, as a high school student, I’d first read about the French court physician and seer in the liner notes to Al Stewart’s (Below Left) album Past, Present, and Future. The album cover text was drawn from British author Erika Cheetham’s (Below Right) spooky speculations about all the historical events that Michel de Nostredame had supposedly predicted before they’d taken place. I think that in our early years, especially at transitions like the one between high school and college, the attraction of imagining our own faraway future is tough to resist. 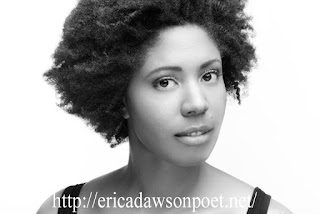 “Rare Book and Reader” is also the opening of my new book, 3 Nights of the Perseids (University of Evansville Press), selected by the Erica Dawson for the 2018 Richard Wilbur Award.  Much of the book explores the tension between the past that shaped us and the contemporary technological world in which we find ourselves today – not always happily. 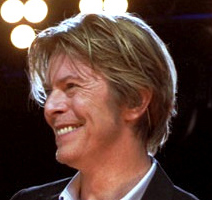 The musician avatars of my youth and young adulthood – David Bowie (Right), Prince, Patti Smith, Elliott Smith, and more – comprise a whole section of the book, so the poem’s inclusion of a less iconic musician is also a nod to the book as a whole. 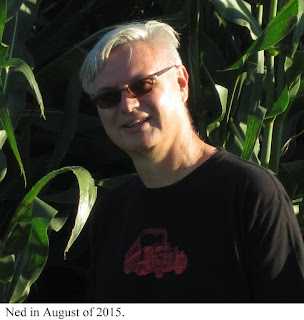 Where were you when you started to actually write the poem?  And please describe the place in great detail. I started the poem in the winter of 2015, during my first semester as a visiting associate professor in Iowa State University’s MFA program in creative writing and environment.  I was living apart from my partner, poet Jane Satterfield, for the first time since we’d married.  Fortunately, her sabbatical coincided with my taking on the new job, and we’d set up the apartment together so that, for the three years I taught at Iowa State, it felt like “our” place, not mine alone. 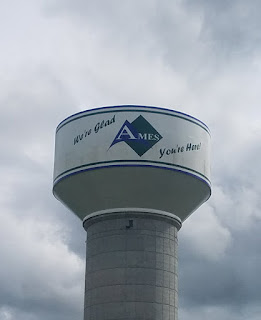 We loved the apartment.  It was nothing special – a second floor unit in a slightly seedy garden apartment complex built in the mid-1970s – but the sliding doors opened onto a balcony and view that stretched for two or three miles ahead.  Every day we could look out on a vast sky and a tree-line shifting with the seasons, not to mention the roof of the nearby middle school, and the distant water tower whose motto, we knew from driving past it, declared, “Welcome to Ames! We’re glad you’re here.” Maybe the 1970s vibe of a building where lots of students lived, too, pulled me back to those days that gave birth to the poem. 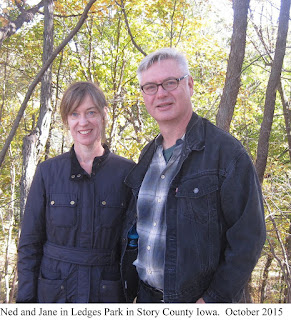 How many drafts of this poem did you write before going to the final? (And can you share a photograph of your rough drafts with pen markings on it?) I started the poem, the first I’d written since moving, after Jane had left for a few weeks.  I thought about it a lot – remembering the rare book room and how out of step I’d felt with the background and social class of most of the people I was meeting.  My adoptive mother was terminally ill and died shortly after that visit to the library, so I had lots of reasons back then, conscious and unconscious, to wonder what the future held.  In 2015 I’d just moved and begun a new chapter in my professional life – a transition with echoes of the one I’d experienced years earlier. 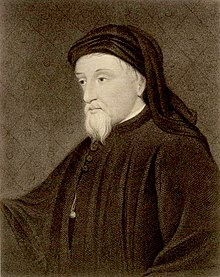 I wanted to write in a form I hadn’t used before.  Chaucer came to my rescue.  Discovering his work was a formative experience during that first semester in college, so revisiting the Monk’s Tale stanza seemed a perfect fit:  it was challenging yet flexible enough to contain a good deal of material and allow me the space to go off on what I hope are useful tangents.
I Googled the information I needed to ensure my memory of the location, procedures, and rare book room holdings was as accurate as possible.  Then I went to work. 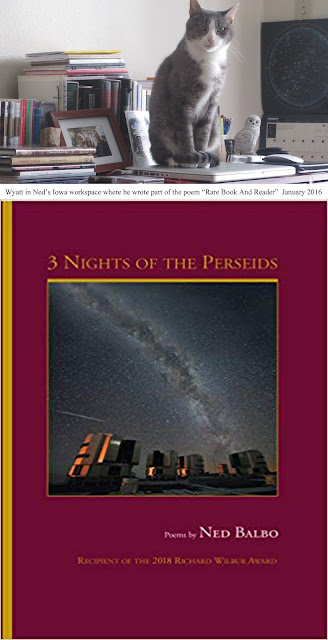 Were there any lines in any of your rough drafts of this poem that were not in the final version?  And can you share them with us? I can’t share any drafts with pen marks because I write almost exclusively on the computer – in fact, I doubt whether the relative fluency I gained in my post-college writing life would have been possible without the option of word processing. I like to clean things up as I go along to avoid becoming discouraged about the quality of work-in-progress; for that reason, I’m uncertain about exactly how many drafts it took to get the finish line.  Maybe 3 or 4 sittings, a couple of hours each, to get the whole poem drafted, and a few more to touch up the weak spots, a little at a time? (I do sometimes touch up late-draft printouts by hand, but I don’t think I did this in this case.) I discovered the following cancelled lines, along with reminder notes about content, in the poem’s original file.

Stunned to contemplate the transformation
Time brought to the living and the dead;

Hesitant to face the transformation
Time would bring. Before me, dead ahead,

Phase-shifted strumming near ten minutes long,
What other proof in time would come along?
that hucksters knew would sell

I sought the book that gave birth to the song—
A first edition, vulnerable and rare,

What do you want readers of this poem to take from this poem? Maybe that who we are grows out of who we were, and that we would look back on our awkward, earlier selves with more compassion than embarrassment. That our human impulse to know the future is irrational and deep, a complicated mix of superstition, hope, and guesswork.  That there’s a higher power, and all we can do is trust ourselves to its unfolding. 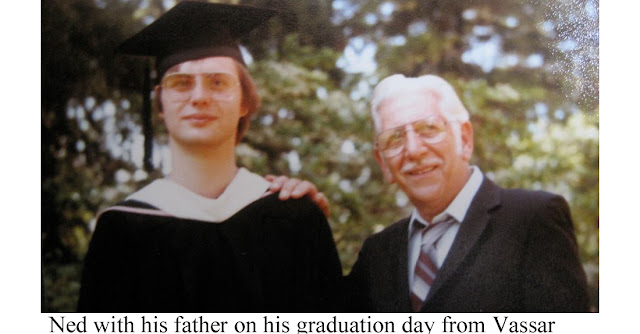 The poem reminds us, too, of how the world has changed.  A college degree once promised, like that portal on the album cover, entry into a world of infinite possibilities – a perspective that seems poignant in today’s gig economy when students are often faced with crushing debt.
On a personal note: as a regular reader of superhero comics till around the age of thirteen (my first publication, ca. 1971, are letters in Marvel’s Daredvil and Tomb of Dracula, and Warren Publishing’s Creepy), I was happy to discover that the figure leaping into the time portal on the cover of Al Stewart’s album (Right First) is Stan Lee (Right Second) and Steve Ditko’s (Right Third) Doctor Strange –recognizable by the trail of his collar and cloak as he vanishes, halfway through but mostly obscured (probably to avoid copyright infringement).  I’d never noticed this back in the days when I actively listened to the album.
That discovery, as quirky as it is, enriches the poem for me.  It reminds me of how random elements (two of Marvel’s celebrated creators, Al Stewart’s (Right Fourth) music, an unsung graphic designer, etc.) are swept along by time and, briefly, brought together by happy accident. 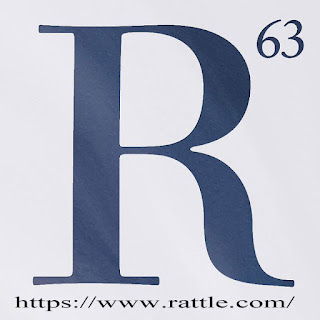 Has this poem been published before?  And if so where? Rattle, Fall 2016.

Anything you would like to add?  Thanks for having me aboard, Chris.  It’s a pleasure to talk bout our shared vocation and all the unexpected factors that come together and ignite into a poem.

Back in the days when we called freshmen freshmen,
I was one, a lank-haired Vassar co-ed
newly landed, searching for the reason
I was there. Before me, dead ahead,
the future held its promise like the shaded
vistas in brochures, or like an album
on the rack the moment you’ve decided
that you have to buy it, take it home—

And so I felt (caught in that no man’s land
of post-arrival limbo, nothing sure
except how much I didn’t understand
of privilege, wealth, and class), this much was clear:
the album’s title—Past, Present, and Future—
and the cloak of Marvel’s Doctor Strange
vanishing through some portal on the cover
promised an escape—at least a change.

The last track was inspired by Nostradamus
Gallic seer and astrologer
who wrote The Prophecies, mysterious
quatrains of cryptic riddles that declare
foreknowledge of disaster, plague, and war,
offering hints that tease and tantalize
(through allegory, tangled metaphor)
the gullible who read with opened eyes—

Hister (Hitler?), three brothers (Kennedys?)
world wars (all three?)—well, sure, he could be wrong,
but if Al Stewart thought the prophecies
troubling enough to put them in a song,
what else would time confirm before too long?
I sat, the huge book open to a page
five hundred years old, in a foreign tongue
(French mostly), brought out carefully from storage

by a young librarian, or senior,
watchful and amused at my expense.
Who wouldn’t be? She knew I was no scholar
steeped in sixteenth-century charlatans,
but just some boy who’d wandered in by chance
or impulse, new to college, drifting still,
his mind enraptured by coincidence
proclaimed as proof, each generation’s will

to buy such bunk, as always, bottomless.
Now I’d beheld an ur-text, reassured
it did exist. A reader under glass,
I sat, sealed in the hush, but not one word—
archaic, clue-encoded—struck a chord:
I’d never studied French! And yet I’d seen
the priceless artifact kept under guard
in some dark vault climate-controlled within

the labyrinthine archives I envisioned;
briefly exposed to light and then returned
to deep oblivion, the world’s end
unknown and waiting.  What else had I learned?
That where the distant future is concerned,
no language equal to it can exist
nor is there language clear and unadorned
to show how time recedes into the past
—Or if there is, it’s written not for us
but for the eyes of one whose practiced gaze
sees farther than our own—who knows that loss
becomes the weight and measure of our days—
who, in the hidden turnings of a phrase,
detects a revelation cast in code
we almost grasp but which remains, always,
unbroken, like the mercy that we’re owed.

Ned Balbo’s most recent book is 3 Nights of the Perseids, selected for the 2018 Richard Wilbur Award. His previous books are The Trials of Edgar Poe and Other Poems (Donald Justice Prize and the Poets’ Prize), Lives of the Sleepers (Ernest Sandeen Prize), Galileo’s Banquet (Towson University Prize), and Upcycling Paumanok. His poetry, prose, and translations appear in Antioch Review, Birmingham Poetry Review, Creative Nonfiction, The Dark Horse, Literary Matters, Notre Dame Review, Scoundrel Time, Shenandoah, and elsewhere. He is the recipient of three Maryland Arts Council poetry grants, the Robert Frost Foundation Poetry Award, and the John Guyon Literary Nonfiction Prize, as well as fellowships from the Sewanee Writers’ Conference and the Virginia Center for the Creative Arts. He is the recipient of a 2017 National Endowment for the Arts translation grant and was recently a visiting faculty member in Iowa State University’s MFA program in creative writing and environment. His partner is poet-essayist Jane Satterfield.