#33 Inside the Emotion of Fiction's "The Baker's Secret" by Stephen P. Kiernan 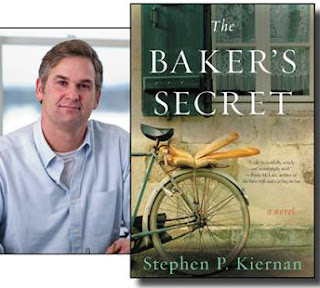 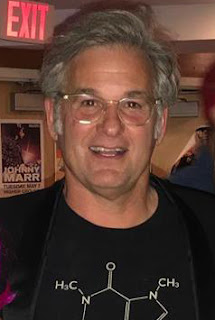 Name of fiction work? And were there other names you considered that you would like to share with us? My latest novel is called The Baker’s Secret. Its working title, from first idea till very late in the editing process, was The Taste of Hope. I have published five books and none have them came out with the title I’d had in mind – which is fine with me. I’m lousy at titles, and I look to others for help. (Right: Stephen in April of 2019) 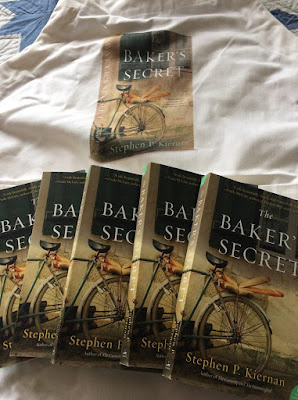 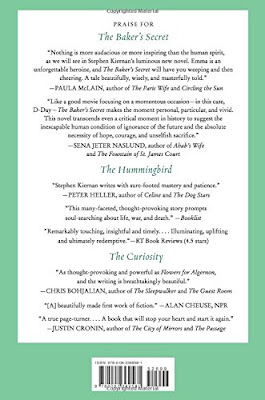 Has this been published? And it is totally fine if the answer is no.   If yes, what publisher and what publication date? This book came out in hardcover on May 1, 2017, and in paperback in April of 2018. There have been large print and foreign editions as well. The publisher was William Morrow Books, an old imprint that is part of HarperCollins. This company has been kind enough to publish three of my books, and has agreed to do the next two as well. 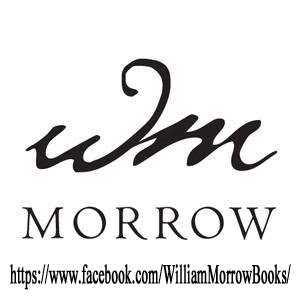 What is the date you began writing this piece of fiction and the date when you completely finished the piece of fiction? I began roughly in the spring of 2015. It’s hard to say when a book is finished, though I suppose the publication date is a pretty firm sign. Yet even then, I find myself editing sentences when I’m on tour, as reading them aloud repeatedly reveals nuances – sometimes strengths but more often weaknesses – I had not noticed before. By tour’s end, my reading copy is full of ink. 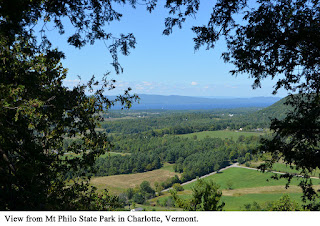 Where did you do most of your writing for this fiction work?  And please describe in detail.  And can you please include a photo? I write every day, especially when I am in the first draft process, so that I won’t lose the thread in my imagination. My writing desk is in the basement of my house in northern Vermont. It’s not a dusty, cobwebbed place though. This basement has windows along the whole eastern wall, and they look out at hundreds of acres of conserved farmland (some of it still farmed, and some given over to wildlife), with the state’s tallest mountains in the distance. 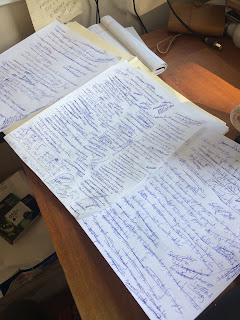 What were your writing habits while writing this work- did you drink something as you wrote, listen to music, write in pen and paper, directly on laptop; specific time of day? I work in silence. Typically I write in the early morning until lunchtime or so, then exercise, then do the rest of the work that a writing occupation requires. Today for example I was up at 4:30 – no alarm – it’s six hours later and I’m still at my desk. Almost all of my writing happens on a laptop; I’ve been writing at a keyboard since I started newspaper work thirty years ago. When I have an especially challenging scene, such as an argument between two characters, I sometimes switch to a bic ballpoint on a white legal pad, writing longhand to slow myself down. I also keep notes on my phone, in the car and around the house. Often I come home from a long run and go straight to my desk to jot down all the things that clarified while I was running. I’ve done this so many times, the finish on my desk is ruined by sweat. 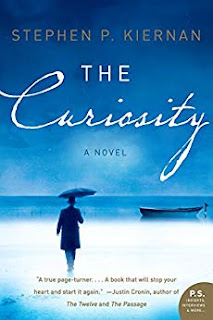 What is the summary of your fiction work? I’ve published a novel, The Curiosity, which explores some of the ethical questions involved in cell research today (cloning, DNA splicing, etc) by telling a modern version of the Frankenstein story. Next was The Hummingbird, a novel about a soldier home from his third deployment to Iraq, a man damaged by PTSD, and the determination of his hospice nurse wife to help him to heal. Most recently, The Baker’s Secret told the story of D-Day from the French perspective: what it was like to live in occupied Normandy, to believe the Allies would never come, and then to see them arrive in multitudes. 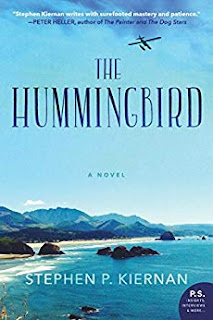 My next novel, which is in the editing process now, has a working title of Universe of Two. It’s about a young mathematician, in 1943, who is drafted into the Manhattan Project and compelled to defy his conscience and build the detonators for the atomic bomb. Also a love story (it is narrated by the young man’s wife), i should be out in early 2020.

Can you give the reader just enough information for them to understand what is going on in the excerpt? This passage contains the opening three paragraphs of the novel. Normally I want to begin a book with action, a scene already underway and we have just arrived. But in this case, I needed to make something first. I needed to give readers an appreciation for the characters that will populate this novel, and a sense of the beauty that exists so that readers will feel the loss when it is destroyed. I love France and the French people, and I feel great sympathy for their suffering during the Nazi occupation. But I want their loveliness presented first, and what better way than the French gift with food, and the French attitude about what a meal is?
The next sentence introduces the occupying army, so this opening is as long as the innocence lasts.

Please include excerpt and include page numbers as reference.  The excerpt can be as short or as long as you prefer.
All through those years of war, the bread tasted of humiliation.
For as long as their nation had possessed a history, the residents of Vergers village had been a people of pleasure, devoted to the senses without shame, and none savored more unapologetically than those of the kitchen. Over a span of centuries,  their culture had turned the routine animal act of feeding themselves into an art form. Delectable breakfast morsels with steaming coffee as dark as mud, calming lunches in the shade when haste is the enemy and cheese is the dessert, dinners luxurious, candlelit, and lasting hours -- such was the rhythm of their days: Who has a story to tell, and shall we place some flowers upon the table?
It did not matter that they lived in a tiny village a kilometer from the chilly northern ocean, their occupations either of the farm or of the sea. If anything, the labors of manure and milking, mending nets or hauling them, only intensified their love of flavor, patience, the company of friends. Therefore the baking of bread, a nearly daylong alternative between active kneading of dough and passive waiting for it to rise, could be as gratifying as deep breathing. In the hearth of the oven, when baguettes basked side by side, making loaves echoed making love. 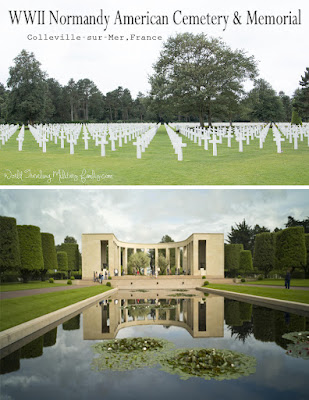 Why is this excerpt so emotional for you?  And can you describe your own emotional experience of writing this specific excerpt?  This passage is emotional for me because I will write the rest of the book about the destruction of something I love. And I will struggle to find the hope and beautiful simplicity that was lost. In my research I traveled all over Normandy -- to the cemeteries where all the gravestones were for boys the same ages as my sons, to the fields pockmarked with bomb craters that were never filled, to the batteries where giant pillboxes and powerful guns remain to this day. If you stand on a beach where the D-Day invasion took place, delivering the liberation of the coastal people and marking the beginning of Germany's defeat, and you know that thousands of boys die on that beach, you cannot help but be humbled. 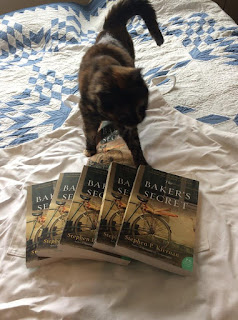 I spent considerable time on these paragraphs, trying to get the language and images just right, to be specific in vivid and with an undercurrent of heart. This section of the book, which is only four pages long, ends with the sentence, "In a time of humiliation, the only dignified answer is cunning." Now we have our two competing forces, the powerful army and the defiant people, and the novel is underway. 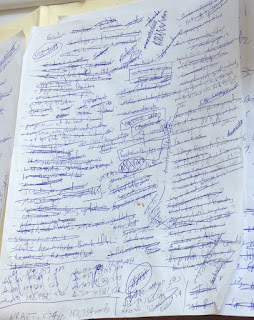 Were there any deletions from this excerpt that you can share with us? And can you please include a photo of your marked up rough drafts of this excerpt. Because I write on a computer, I rarely have early drafts to show or share. But as I write a book, I built a list of ideas for future scenes, or changes to make in revision, or themes I want to keep in mind. It's like a carpenter's punch list. Those sheets are crazed and chaotic and make sense to no one but me -- and they are an essential part of how I keep the gigantic volume of a novel in order in my mind. (I'll try to attach a photo to give you a sense of them.) 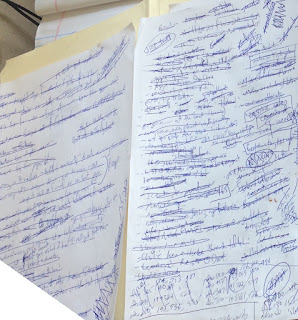 The only other evidence is my desk. It is a plain cherry platform on iron legs. Most days after writing I go for a run, and during that outing all sorts of things become clear to me: moments that did not work, lines that could be better, etc. When I return home, I go directly to my desk to make notes for the next day's work. I have done this so many times, sweating on the desk, that I have ruined the finish. 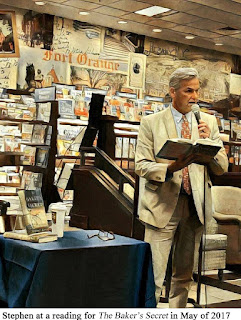 For me, the creative life in any art form is the gradual accruing of thousands of hours of effort. So when I see those punch list pages all crossed off, or when I see the finish on my desk worn down, I think this is like a painter's easel splattered with spills from past pieces, or a violinist needing to change a string because the tone is all gone from the current one. Completing a novel is a moment in time; writing novels is a life's work. 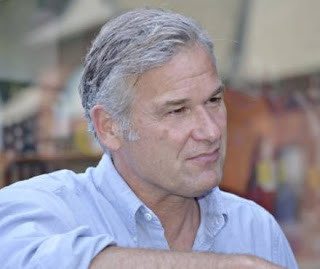 Anything you would like to add? Every year I write a short story that I post on my site for free, to thank readers for making my writing life possible. I’m immensely grateful to get to write for a living. (Left: March of 2018.  Photo credit:  Martha Folson)

As a journalist and novelist, Stephen P. Kiernan has published nearly four million words. His newspaper work has garnered more than forty awards — including the George Polk Award and the Scripps Howard Award for Distinguished Service to the First Amendment. Author of the novels THE HUMMINGBIRD, THE CURIOSITY, and THE BAKER'S SECRET, he has also written two nonfiction books, LAST RIGHTS and AUTHENTIC PATRIOTISM.
Stephen was born in Newtonville, NY the sixth of seven children. A graduate of Middlebury College, he received a Master of Arts degree from Johns Hopkins University and a Master of Fine Arts degree from the University of Iowa Writers’ Workshop. He has chaired the board of the Young Writers Project, served on the Vermont Legislative Committee on Pain and Palliative Care, and served on the advisory board of the New Hampshire Palliative Care Initiative.
Stephen travels the country speaking and consulting on how to expand use of hospice, palliative care and advance directives.
A performer on the guitar since he was ten years old, Stephen has recorded 3 CDs of solo instrumentals, and composed music for dance, the stage and documentary films.
He lives in Vermont with his two amazing sons.
www.stephenpkiernan.com