****All image are given copyright permission by Marjorie Maddox for this CRC Blog Post only unless otherwise noted. 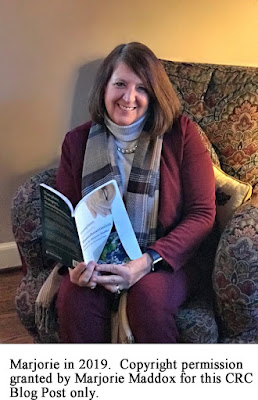 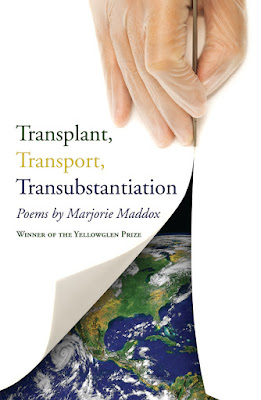 Can you go through the step-by-step process of writing this poem from the moment the idea was first conceived in your brain until final form? Here is some background for a poem from my re-released collection Transplant, Transport, Transubstantiation, which focuses on my father’s unsuccessful heart transplant during the Blizzard of ’93. 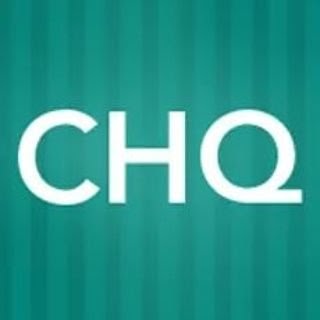 As I discussed also in a talk at the Chautauqua Institution (https://chq.org/), at the age of 39, my father suffered his first of ten cardiac arrests. The years of my youth were filled with ambulance sirens snaking their way to our house. As a pre-teen, I gave him CPR. Although my father lived until 65, he did not survive a heart transplant.

Those from the Northeast or Midwest may remember the blizzard of 1993. I had just accepted a teaching position at Lock Haven University in Pennsylvania. During that period, my father had been waiting many months for a heart donor when I traveled home to Ohio to visit my parents over spring break.  Once there, I heard ominous forecasts blaring from the radio, so I rushed back to PA and my teaching job. 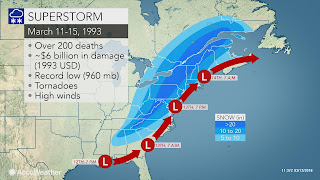 Soon after the blizzard hit, a man died in a car accident, and my father received that man’s heart. However, the State Police closed all the highways. There could be no returning to Ohio. For three weeks, the transplant seemed successful, but eventually, my father’s blood became infected, and he died. For years afterwards, I couldn’t stop thinking about this stranger’s heart buried inside my father. 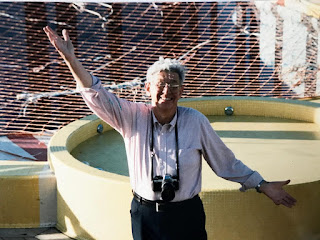 The poem focuses on my father’s blood infection and the eventual amputations. It was so hard to imagine not only losing my father, but also thinking of my father—the ultimate people person and an accomplished photographer (Right)—without his legs and fingers. I have been thinking about this poem again very recently for several reasons: 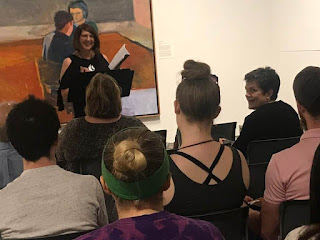 •When reading from this collection at a university this past September (Left), I was quite touched when a student came up to me afterwards, in tears, and thanked me again and again for the poem. It reminded her of her grandfather and how her family grieved for him. 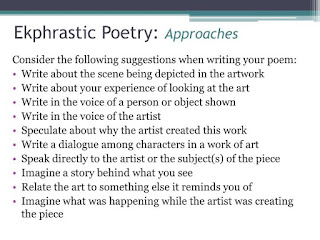 •Recently, I have been writing a number of ekphrastic poems, both based on paintings and on photographs. The latter has again connected me to the role and mindset of specific photographers, but also to this passion that was my father’s. In the poem, I try to use images and terminology from the art world—including the use of fruit and sheets in still lifes—as well as contrast movement and stasis, life and death. The poem also speaks to the difficulty in accepting loss—thus the reference to and phenomena of “phantom limbs” after an amputation. 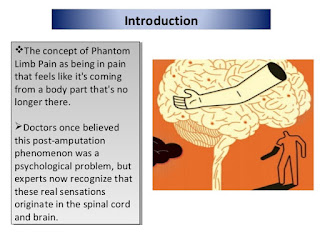 •Because our host on this blog is both a photographer and poet, I also thought this might be an appropriate poem to bring to your attention.

What month and year did you start writing this poem? The following —from Transplant, Transport, Transubstantiation—was written several years after my father’s death. The poem gestated for several seasons; I needed to wait for the initial waves of grief to pass. I needed calm.

How many drafts of this poem did you write before going to the final? (And can you share a photograph of your rough drafts with pen markings on it?) I only remember that like all my poems, this one went through many, many drafts. 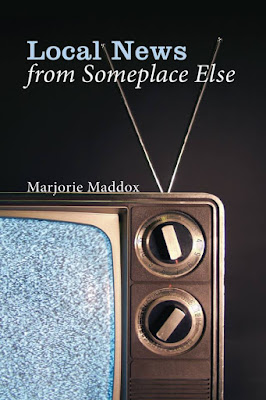 Were there any lines in any of your rough drafts of this poem that were not in the final version? And can you share them with us? I am sure that there were. I write on a laptop and cut-and-paste a lot. I no longer have some of those early versions. 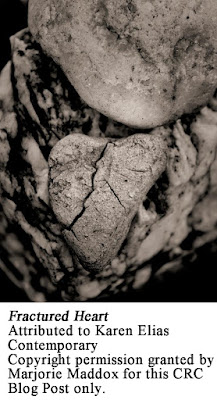 What do you want readers of this poem to take from this poem? Poetry sometimes gives us a glimpse into moments, sometimes a glimpse into entire lives. In this case, “Landscape and Still Life” focuses on both a moment of family grief (when my father’s legs and fingers were amputated because of a blood infection after his heart transplant) and the long-lasting grief that has affected our entire lives. We are both still life and landscape; frozen in one moment of time, as well as part of a larger landscape of time/mourning. This is how grief is. 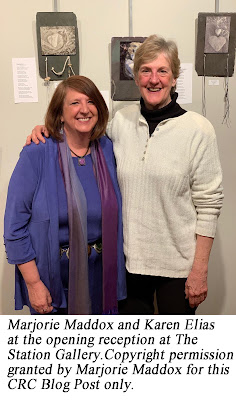 Which part of the poem was the most emotional of you to write and why? I still find this entire situation heart-wrenching—not only my father’s death (after the hope of a new life with a new heart) but the idea that a photographer who was always on the go was losing his fingers and his legs. This would have been a difficult adjustment for him—although I do believe he would have adjusted eventually. 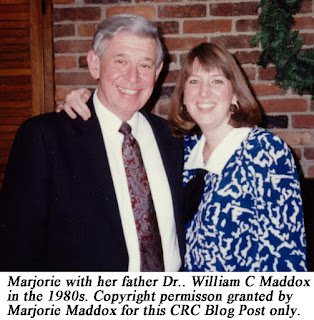 Has this poem been published before? And if so where? “Landscape and Still Life” is part of my newly released collection Transplant, Transport, Transubstantiation, which previously won the Yellowglen Prize and was one of three finalists for the Brittingham and Felix Pollak Book Award. I attach a photo of the cover. 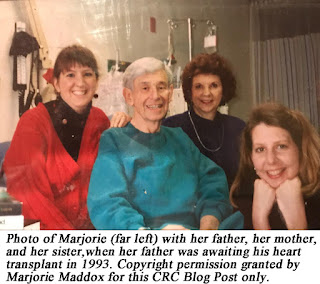 Anything you would like to add? You may find out more about this collection here http://www.marjoriemaddox.com/description-and-reviews-ttt
and also here
https://www.amazon.com/Transplant-Transport-Transubstantiation-Marjorie-Maddox/dp/1532655126/ref=sr_1_1?s=books&ie=UTF8&qid=1543849445&sr=1-1&keywords=marjorie+maddox 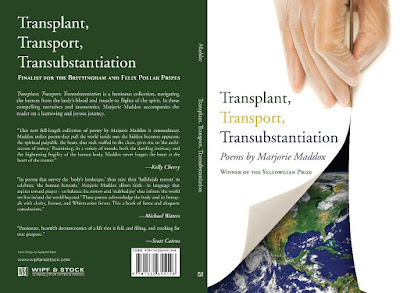 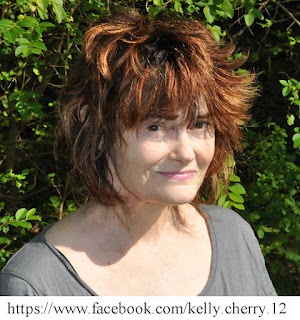 Here are sample blurbs and reviews of the book:
“This new full-length collection of poetry by Marjorie Maddox is extraordinary. Maddox makes poems that pull the world inside out: the hidden becomes apparent, the spiritual palpable, the heart, that sock stuffed in the chest, gives rise to ‘the architecture of mercy.’ Examining, in a variety of moods, both the dazzling intricacy and the frightening fragility of the human body, Maddox never forgets the heart at the heart of the matter.”—Kelly Cherry 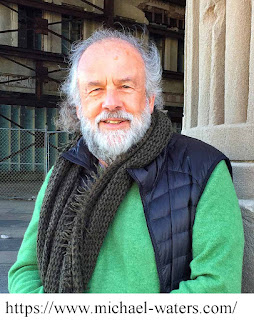 “In poems that survey the ‘body’s landscape,’ then raise their ‘hallelujah torrent’ to celebrate ‘the human beneath,’ Marjorie Maddox allows faith—in language that aspires toward prayer—to balance the sorrow and ‘stubbed joy’ that inform ‘the world we live in/and the world beyond.’ These poems acknowledge the body and its betrayals with clarity, humor, and Whitmanian fervor.  This is a book of fierce and eloquent consolations.”—Michael Waters 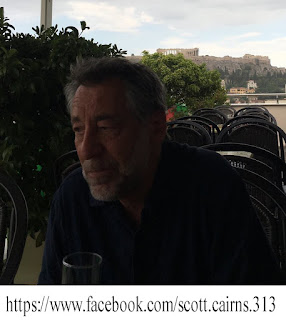 “Passionate, heartfelt documentaries of a life that is full, and filling, and reaching for true purpose.”—Scott Cairns 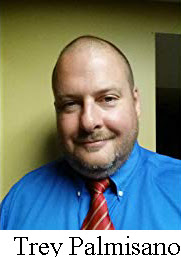 WPSU Take Note Interview Show: For Father's Day, Poets Todd Davis and Marjorie Maddox Write About Their Fathers
Reviewed in Anglican Theological Journal "... Perhaps, its Maddox’s own familial losses (her father undergoing a heart transplant) that have primed her for the part of raconteur and medical expositor. In the multi-part poem “Body Parts,” Maddox demonstrates a keen eye for descriptive writing, a poem which ought to find its way into every medical school textbook in the country. Her pinpoint execution, the dance between the purely informational and emotional, sheds new light on old bones. And these are the kind of bones she picks, the kind she buries, the kind she raises from the dead just to bury again, the kind that give us an apercu into the social wares that make up our day-to-day existence..." -Trey Palmisano 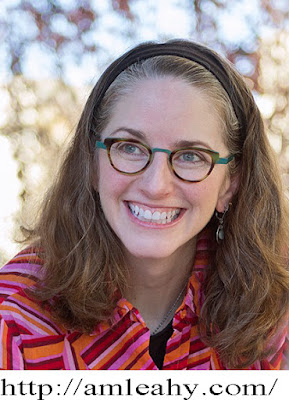 Alive and Writing: What Recent Memoirs Reveal about Illness and the State of Health Care by Anna Leahy in Entropy "...Or Marjorie Maddox’s father, who, as she recounts in the reissued poetry collection Transplant, Transport, Transubstantiation, receives a heart transplant from a dead stranger: “'His heart is buried / in my father, / who is buried'....These books—Everything Happens for a Reason; Sick; The Family Gene; I Am, I Am, I Am; and Transplant, Transport, Transubstantiation—are each worth reading on their own, for the distinctive story of illness, for the sharp perspective, and for the original voice. If you’ve seen one, you’ve not seen them all. Each is a really good book in its own right. Together, they are an imperative, a call for compassion for each other. Moreover, they are a call for wide access to personalized health care and individualized decision-making between healthcare providers and patients...." 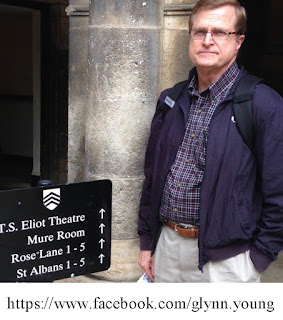 Reviewed at Tweetspeak Poetry by Glynn Young "...Transplant, Transport, Transubstantiation is about change both sudden and gradual. It is about what binds us in relationships, and what happens when those binds come undone or are severed. And it’s about reliance, what we have and what we find to help us go on." 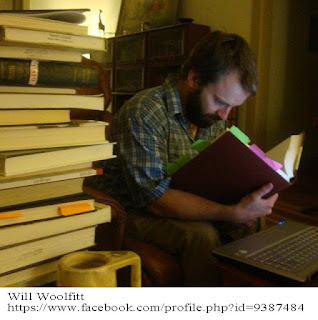 Interviewed about Transplant, Transport, Transubstantiation by Will Woolfitt at Speaking of Marvels  "Writing is a process of discovering the world inside and around us..."

Reviewed by Lynn Levin in Poetry Niederngasse alongside Deborah Fries' Various Modes of Departure "... Marjorie Maddox’s rapturous collection Transplant, Transport, Transubstantiation is the winner of the Yellowglen Prize....A close and expert observer of nature, Marjorie Maddox is—as her book titles often denote—both a poet of the earthly and the transcendent. Her descriptions of medical and biological phenomena—surgery, the organs of the human body, a courier on an airplane carrying organs for transplantation—are often lenses through which she glimpses the eternal...." 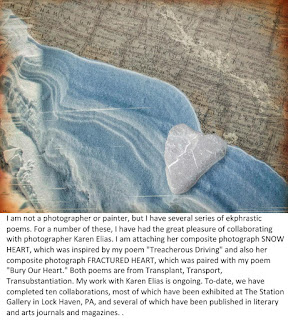 I give readings and workshops around the country. For this newest book—Transplant, Transport, Transubstantiation, which includes a long poem based on the medical text Gray’s Anatomy entitled “Body Parts” as well as poems on travel and the Sacraments—I am especially interested in connecting the medical, spiritual, and poetic by speaking at universities and medical centers. Please spread the word!

After the new heart,
when the blood cultivated its fungus
in my father's fingers,
then began its harvest in his legs,
pruning flesh from the rotting fruit of what we were
once, we too withered, lost the way to move
in the moving world.

What would he photograph now?
we asked, he who walked miles
to catch light, in its pedestrian way,
ambling along childhood footpaths.

When he focused his lens without fingers,
framed and balanced each unruly composition,
each subject sprouting onto film,
how would his body's landscape separate lights and darks,
begin again to develop?

Masked and scrubbed
in the half-light of intensive-care,
we study his absences,
the silhouette of appendages
lost, phantoms tucked neatly
beneath the photo-screen of sheets.
Obedient still-lives, we stay and stay
until he, too, is gone. 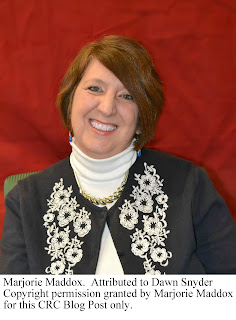 Marjorie Maddox, Sage Graduate Fellow of Cornell University (MFA) and Professor of English and Creative Writing at Lock Haven University, has published eleven collections of poetry—including True, False, None of the Above (Poiema Poetry Series and Illumination Book Award Bronze Medalist in the Education Category ); Local News from Someplace Else ; Wives' Tales; 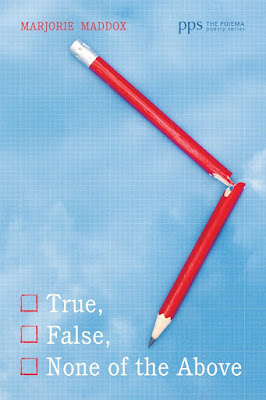 Transplant, Transport, Transubstantiation (2004 Yellowglen Prize; re-release Wipf & Stock 2018); and Perpendicular As I (Sandstone Book Award)—the short story collection What She Was Saying (Fomite Press); and over 550 stories, essays, and poems in journals and anthologies. 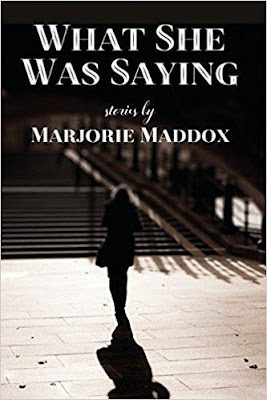 The recipient of numerous honors and co-editor of Common Wealth: Contemporary Poets on Pennsylvania (Penn State Press) and assistant editor of Presence, she also is the author of four children’s books, and the great grandniece of Branch Rickey, the General Manager of the Brooklyn Dodgers, who helped break the color barrier by signing Jackie Robinson to the Major Leagues. For more information, please see www.marjoriemaddox.com