#30 Inside the Emotion of Fiction's LUCY, GO SEE by Marianne Maili 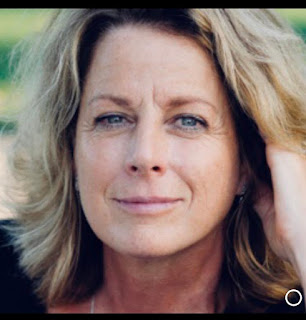 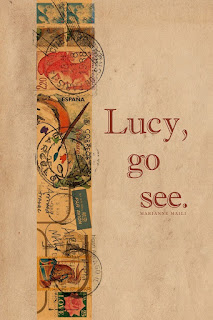 Name of fiction work? And were there other names you considered that you would like to share with us? Lucy, go see.  At one point the work was titled The Beautiful Chaos of Camels and Gold. 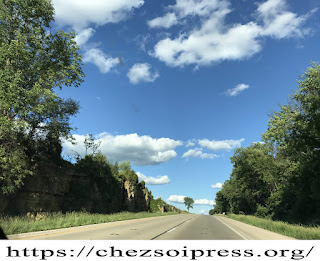 Has this been published? And it is totally fine if the answer is no. If yes, what publisher and what publication date? Chez Soi Press, January 2018.
https://mariannemaili.com/buy-lucy-go-see/ 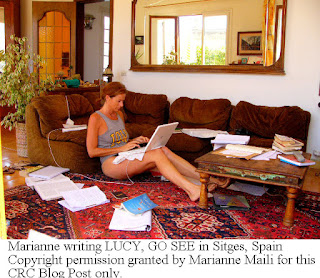 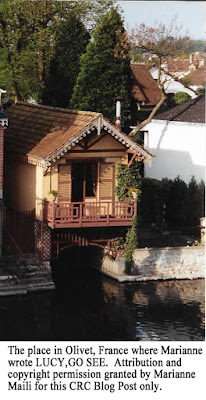 Where did you do most of your writing for this fiction work? And please describe in detail. And can you please include a photo?  It has been an amazing journey of writing and refining.  I wrote some of it in Olivet, France, and most of it in Sitges, Catalonia, Spain. I edited it in many places: Spain, Canada, England, California, Vermont, Wisconsin, Iowa, Florida, Illinois. 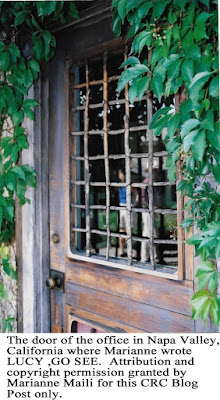 In some ways, it has taken me 40 years to get it out, and in others, 25, and in others, 18. There are so many fabulous stories involved in the making of this one. Click on the link below to see some of the places I wrote and most of the photos (you can click on any one to see it bigger) of me are by my son, who often watched me and once said to his grandfather, “My mom is always writing or reading, always with books and papers” and my dad told him, “That is a nice way for a boy to see his mom”
https://mariannediowa.org/2018/01/11/guts-refined/ 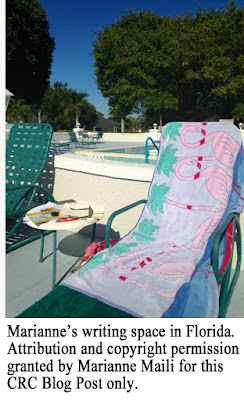 What were your writing habits while writing this work- did you drink something as you wrote, listen to music, write in pen and paper, directly on laptop; specific time of day? At the beginning, I often wrote while my son napped. When he woke, we played music and danced; we used chopsticks as drumsticks and pretended the daybed in the sunny den was a set of drums. 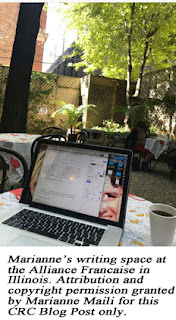 This past November, the night before Thanksgiving, he and I were walking in Iowa City, down the hill behind the Dey House, and across the bridge that is a favorite of mine. “I love this bridge,” he said, and then, “Mom, what is the theme song of your novel?”
“Hmm, I don’t know. But one reviewer told me she liked the soundtrack of it.”

“There’s a soundtrack?”
“Kind of, I mention music that Lucy listens to throughout it. I guess if I had to choose one of the songs it would be from The Four Non-Blondes, ‘What’s Going On?'” My son looked for it on his phone, “are you sure it’s not called ‘What’s Up?’, to which I nodded, and then with the small speaker attached to his belt, he played it, and we danced together there on the bridge under the stars and over the Iowa River, in celebration. 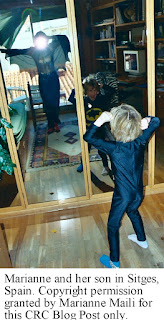 I wrote the first draft in 14 months. I set a minimum goal of 1,000 words a day. I usually wrote in the morning, either at home or on the train, or wherever I was that I could. I wrote on a Powerbook, an iBook, a MacBook. I like mornings for writing though I also sometime worked in the evening, and nearing the end, all day. 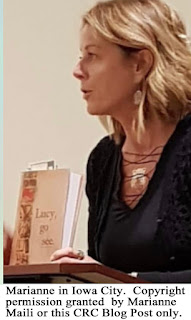 I worked on that first draft off and on, contracting and expanding, and playing with narration and voice.  Some years it hummed softly on a shelf or in a drawer, other times it sang out to me to pay more attention and play and dance and work with it. 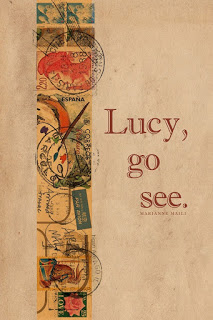 What is the summary of this specific fiction work?     It is a story of a young woman from rural Iowa who feels misplaced and longs to see the world and ends up doing so by working as an international model, traveling through that peculiar cosmos with her Midwestern values. It is a sort of quest to be oneself in the world, and, in this case, for a woman to be herself in a man’s world.
As Lucy Pilgrim does her best to live freely, she realizes that a return to her roots and a voicing of a wound, secret to even her, holds the key to more of that freedom. It is a story of generations of women, of the life-giving power of a mother’s voice, and it has also been called  “an intriguing tale of sexual revelation”, this revelation is also a freedom-enhancer as Lucy discovers the autonomous nature of her sexuality and develops sexual agency.

Can you give the reader just enough information for them to understand what is going on in the excerpt? In this excerpt, Lucy has gone through a very difficult summer at home in Iowa, at 25, living with her parents again after traveling around the world, and the weight of all that happened to her broke her down, and she was depressed. She had never let her family see her so low, and she began to seek counseling, which her father did not approve of. 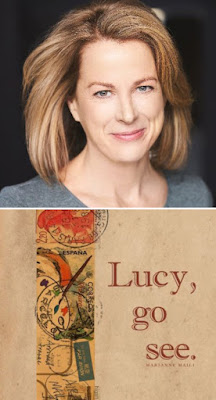 She revealed more of her less-than-perfect self and felt a lot of shame and was working her way through that. In this scene, she is coming out of the worst of it, feeling stronger, and getting ready to leave Iowa again. This is the penultimate chapter of the novel, which has taken the reader through a lot of Lucy’s introspection, and her struggle with both wanting to please and impress others, especially her family, and her knowledge that it is better not to care what others, and these folks, think of her. Viola is her mother.

Please include the excerpt and include page numbers as reference.  The excerpt can be as short or as long as you prefer. Lucy, go see. Pages 326-327, Hardcover, First edition:

“[...]As Viola parked, Lucy looked at her and blurted, “I feel like Dad is never going to respect me again.”
Viola snapped her head to face her, her hands tightened around the wheel and her eyes were fiery, “So what? Is he God of the universe?”

And that’s how Lucy realized he wasn’t. Once again, her mother, in a matter of seconds, gave her the gift of freedom.” 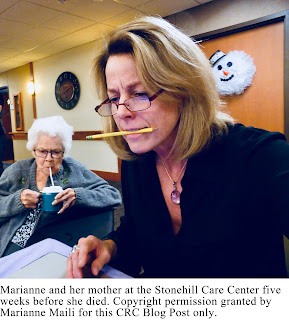 Why is this excerpt so emotional for you?  And can you describe your own emotional experience of writing this specific excerpt? The excerpt is emotional for me because it is based on my own experience and it had a double impact - I could feel the relief when my mother said it, and I could see the gift she gave me with that statement even more clearly when I wrote it, years later, which gave me even more appreciation for my mother. 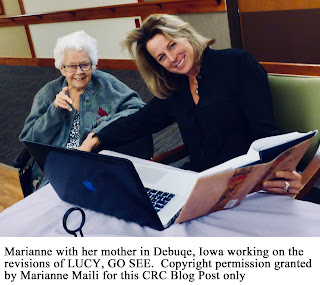 She died last year, a couple of weeks after the novel was released. It meant so much to me to see it in her hands, as the writing of it showed me all she had given me, much of which I did not see at the time. We so often heard growing up, those of my generation, “oh, just wait until your father gets home, or what will your father think?” This is a powerful counter statement to that, a reminder that fathers are not God. 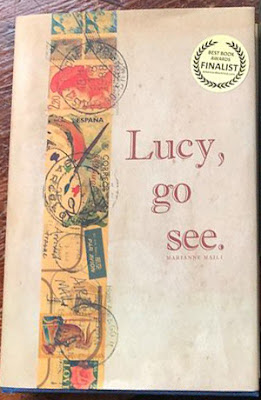 Were there any deletions from this excerpt that you can share with us? And can you please include a photo of your marked up rough drafts of this excerpt. I kept going back and forth on leaving off the last sentence about Lucy realizing her father was not God of the Universe and that what he thought of her was unimportant to her future development. I still wonder. It is difficult for me to go back into the book and not want to change things. In many ways, this story is about how women’s concerns about what men think of them affect their ability to be free, to be themselves. I do not have a photo to share. I do have a video of what a marked up first draft of the second novel looks like: 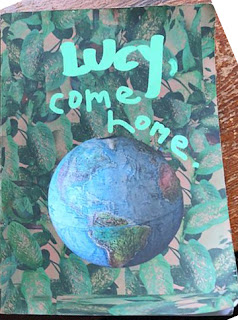 Other works you have published? This is the first novel, and I intend for the second, Lucy, come home., to be published in June. Other works are flash fiction pieces, one of which, “Tuberculosis” won an Honorable Mention in the 2014 Driftless Review contest, and I have many academic essays. Some examples are my PhD dissertation, “A Quest for Fulfillment: Lucy Pilgrim’s Map” which was a scholarly discussion on Voice, Wound, and Eros (3 themes in the novel) and my Masters Thesis, “The Flaw in the Crystal in the Work of May Sinclair”, among them. 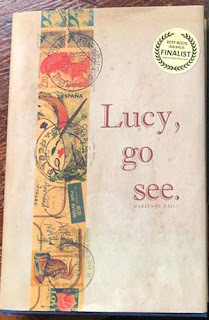 Anything you would like to add?  “You’ve got guts, babe,” my dad told me once, and I recall that moment often at times like these. I am thrilled to announce the availability of the hardcover print 1st edition of Lucy, go see.  You can order it through Chez Soi Press at www.chezsoipress.org  or at Amazon https://www.amazon.com/Lucy-Go-See-Pilgrim/dp/0999663100/ref=tmm_hrd_swatch_0?_encoding=UTF8&qid=1552672948&sr=8-1 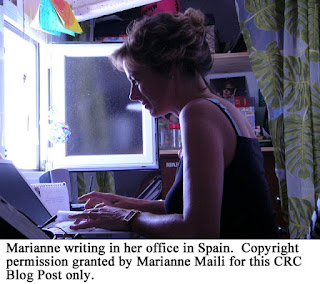 Lucy, go see was recently honored as Finalist in American Book Fest’s 2018 Best Books Awards in the women’s issues category. The prima materia of the story is of the most intimate nature. I both hope that the novel leaves readers speechless, and that it inspires thoughtful, careful conversation.
Lucy, go see is currently a finalist for the Eric Hoffer da Vinci Eye Award for outstanding cover art. 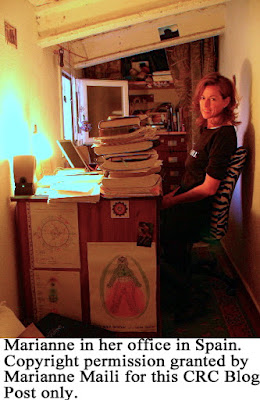 Marianne Maili, is a native of Key West, Iowa, a French citizen, and a long-time Spanish resident of Catalonia. Her first novel. Lucy, go see.,  was published in January. Marianne Maili pioneered the acceptance of creative dissertation work in continental Europe when awarded her PhD in The Construction and Representation of Cultural Identities from the University of Barcelona. 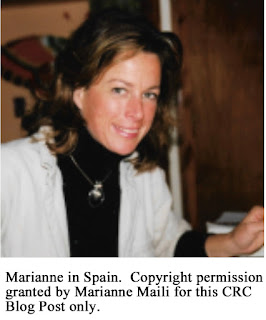 An American and French citizen, she speaks English, French and Spanish, and translates from Catalan. Her Certificat de Langue Française is from the University of Paris-Sorbonne.  A Spanish Ministry International Mobility Scholar for both her M.A. and her PhD, and a Visiting Scholar at the International Writing Program at the University of Iowa where she earned her B.A., she was also an Erasmus Distinguished Foreign Visitor at the Josef Skvorecky Literary Academy in Prague, Czech Republic. 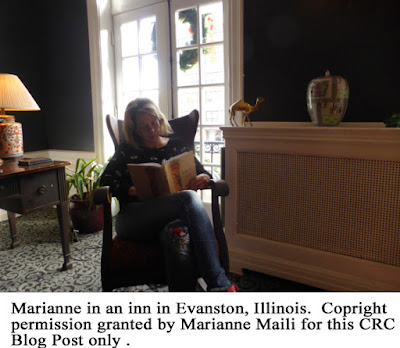 For twenty-five years she traveled extensively throughout the world while living and working as model and actress in Italy, Japan, France, Spain, Hong Kong, Austria, and Switzerland. She has taught at the University of Barcelona, the CIEE Barcelona Study Center, the Writing School (Escola d’Escriptura) at the Ateneu Barcelonès, and after returning to her Iowan roots, she taught at The University of Dubuque, and the University of Wisconsin-Platteville, where she was interim head of the French program.
Lucy, Go See  won the Eric Hoffer Da Vinci Eye Award for Outstanding Cover Art.  Carina Clark designed it with me so it is a co-award -
www.mariannemaili.com
mmdumonde@gmail.com
Author Page on FB: Marianne Maili
Instagram and Twitter: mariannemaili