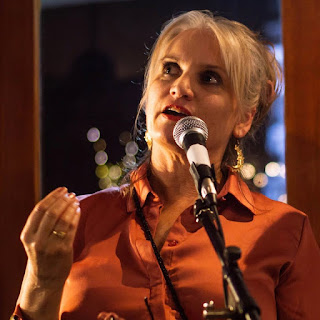 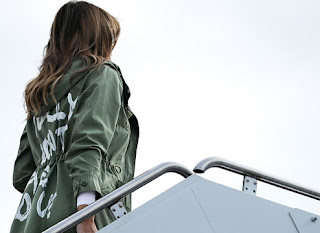 Can you go through the step-by-step process of writing this poem from the moment the idea was first conceived in your brain until final form?  I conceived the poem ‘Melania’s Tone Deaf Jacket’ whilst out on a walk, the day before the monthly poetry event I convene was on.  I was incensed about Melania Trump wearing her jacket displaying the words, ‘I don’t really care do you?’ (Right) whilst she was boarding a plane on her way to visit the children who were detained in a facility in Texas, after having been separated from their parents at the Mexican border of the United States of America. 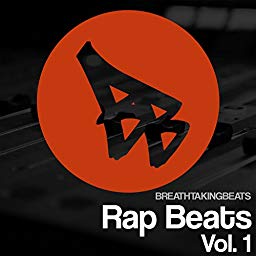 I started chanting the chorus to the rap and coming up with various verses that address the theme of apathy, which I felt, she was displaying by wearing that insensitive jacket.  I went home and immediately started to write the rap. I also found a backing track to sing it to on Spotify. ‘Always and Forever’ (sad Piano Rap Mix) from Rap Beats Vol.1. (Left) 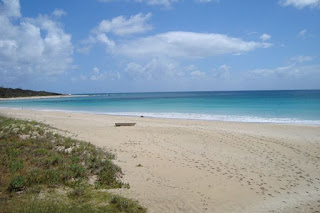 Where were you when you started to actually write the poem?  And please describe the place in great detail.  I conceived the poem ‘Melania’s Tone Deaf Jacket’ whilst out on a walk, along the beach foreshore of McCrae, (Right) located on the beautiful Mornington Peninsula, Victoria, the day before the monthly poetry event I convene was on. 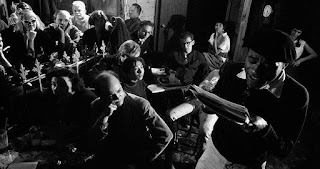 How many drafts of this poem did you write before going to the final?  I was engrossed in the rap I was writing and kept returning to it. It consumed my waking hours for the next 24 hours or so, and I continued to review and re-draft it many times. When I felt it was the right length and said what I felt it needed to say, I started to rehearse it as a physical performance for the Sunday night monthly poetry gathering, Poets Corner.  (Left:  Beatnik poets in the 1960s.  This is the Facebook web logo photo for Poets Corner)  (https://www.facebook.com/groups/1528686867149765/ 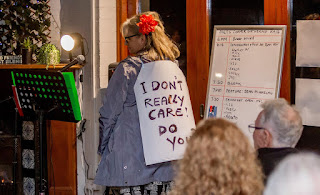 I found a jacket, which I felt, would work as a costume and made a stick on display for the words, ‘I don’t really care do you?’ I started the song with my back to the audience and acted coy (as she does) as if I didn’t know the full extent of my actions and giggled and flirted as I sang the chorus each time with my back to the audience.  During the chorus, I was Melania. During the more intense and serious phrases, I was serious and more of a narrator or commentator. It was received, to my utmost pleasure and surprise, really well.  I found writing this rap/poem just so easy. It seemed to just write itself in many respects. I barely struggled with finding the words to fit the rhythm. I spent the last few hours choreographing the dance moves and hand actions I wanted to use to help emphasize the meaning behind the words and rap. (Above Right:  Heather performing "Melania's Tone Deaf Jacket" on June 28,  2018.  Copyright permission granted by Heather Forbes-McKeon for this CRC Blog Post Only) 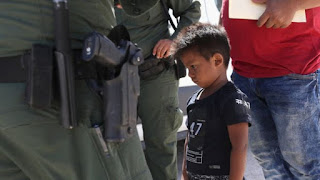 What do you want readers of this poem to take from this poem?  My intention was to make it clear that we who live in a democracy should care about the world’s problems and the suffering of others and that it is deplorable that one of the world’s most powerful and influential women would display such apathy and appear vein and self-consumed. 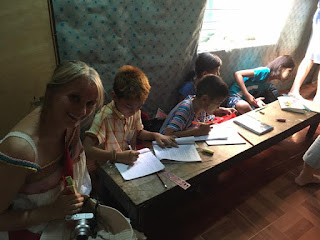 I have travelled quite a lot around the world and seen extreme poverty and seen how charity can really make a difference to poor cultures. Last year I went to Myanmar with my husband on a World Vision (RIght) (https://www.worldvision.org/) related tour of the slums to see how micro-credit can enable these people to live better quality lives, afford education for their children and be self-sufficient. I hope that with more awareness and less self-centeredness people, particularly who are able to, will want to make a difference to those who suffer.

Which part of the poem was the most emotional of you to write and why?  In order to make the point about apathy in the rap, I needed to include some dramatic and shocking real life events which are concerning so I started researching. These events; about the Saudi women only just being permitted to drive, the election in Turkey still resulting in the electing of a dictator, the U.S.A no longer being willing to be the world’s superpower, and to become more focused on its own country therefore handing that power over to China, Ethiopia and Zimbabwe’s election violence, the mass exodus of people around Europe as a result from the swing to the Right in politics and knowing that many Australian’s wouldn’t know that our indigenous people’s life expectancy is 45 years of age, and of course the fact that people are jailed or killed for speaking out using poetry or writing ,were the most emotional aspects of the rap to write and to perform. (Left:  Heather performing "Melania's Tone Deaf Jacket" on June 28, 2018.  Copyright permission granted by Heather Forbes-McKeon for this CRC Blog Post Only)

Today Turkey went to the election poll
Dictator President Erdogan did not fall.

The world’s super power is handing it over to China
While they separate parents from children at the US border.

American’s are insular not unlike our own Mornington peninsula
Mono-cultural, apathetic - taking our compassion to the
cinema.

Thank you for being here today to share the power of words
On this day when in some countries people’s words become swords.

At a rally for Ethopia’s Prime Minister today many were
killed
The Zimbabwe president dodged an attempt on his life and blood was spilled.

What are the forces of political oppression causing the
world’s mass exodus?
And what is Australia doing to help the children of asylum seekers?

How much do you value a democracy, one of the few that is
still so true
In a country so new? Allowing each person to share their
point of view?

In some countries you would be jailed or killed for
expressing in poetry and spoken word
The lines between truth, human rights, greed and power –
have become, become blurred.

Here we have the freedom and power to inspire and speak
out and change a life.
By the way did you know that our indigenous’ life
expectancy is on average 45?

In a world that is so selfish – what’s the future of
compassion?
When the FLOTUS sets the bar so low in her choice of
fashion? 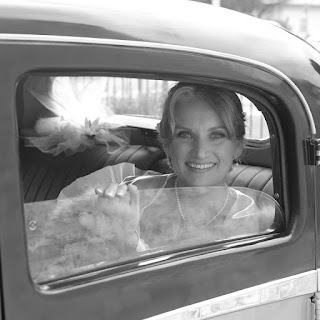 Heather Forbes-McKeon is a playwright, screenwriter, poet, diarist and short film and radio producer. Heather completed her Masters in Writing and Literature in 2014. She has established and convenes a monthly performance poetry group. Heather recently produced and wrote ‘ The Shell’ a short film. This year, Heather also produced a series of radio plays for RPP FM based on historical events from the Mornington Peninsula, Victoria, Australia. Heather was a high school Drama teacher for many years but has now stepped out into the real world and hasn’t looked back! Heather intends to return to her love of acting later in life when she can play the old woman gossip!


Posted by Chris Rice Cooper Blog at 6:14 AM