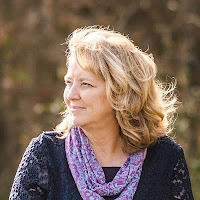 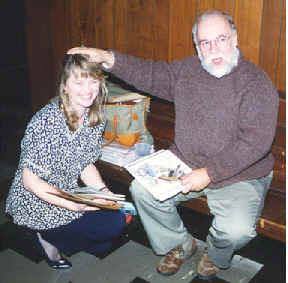 Can you go through the step-by-step process of writing this poem from the moment the idea was first conceived in your brain until final form?   I wrote the poem “My Children Question Me About Poetry” sometime around 1985 or ’86 in response to a prompt from one of my major influences, east Tennessee poet Jeff Daniel Marion. (with Rita right.  Copyright permission granted by Rita Quillen for this CRC Blog Post Only)
He was teaching the poetry class at the Appalachian Writer’s Workshop held annually at the Hindman Settlement School in eastern Kentucky.

The instructions for the assignment were to write a series of logical questions about something on the left side of the page, and then answer each question to the right. The answers to the question were to be such that the right side of the page could be read as a poem.  Here is that poem: 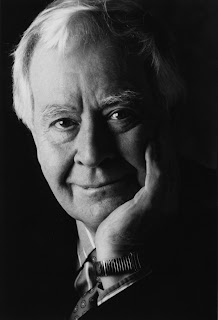 About that same time in my life, my grandmother on my mother’s side passed away. A year or two after her death, I was watching a film version of Horton Foote’s (Left) amazing play, TRIP TO BOUNTIFUL (Below) about a grandmother wanting to make one last trip home to her Texas hometown before she passed away. For some mysterious reason, the woman in the film made me think of my grandmother, and then of the lines of this poem “the stillness beyond memory/at dawn on the last morning.” 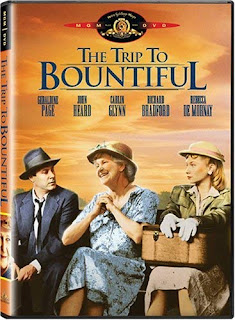 On the surface it makes no sense, in that my grandmother had no compelling desire, as far as I knew, to return to the community of her childhood or make any other such pilgrimage. But she did have a very challenging life, in many ways, and at the end of her life struggled with dementia and amputation among other things. I felt a sadness at her passing that was not just the expected type of grief from loss we all feel at such a time, but also a grief that her life couldn’t have been easier, happier, less stressful. 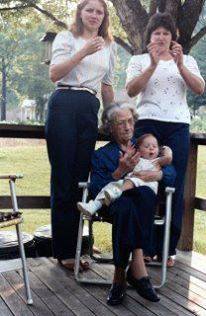 Another relevant event that occurred about the same time was a discovery of the poetic form called a pantoum; its beautiful, haunting, liturgical quality of repetition and musicality really appealed to me. All of these events converged into a poem called
“Deathbed Dreams” which was a pantoum about my grandmother that incorporated several images
from the earlier poem of questions and answers. (Left:  Rita, left standing, with her grandmother 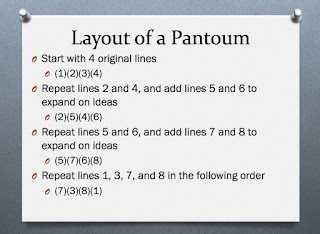 In the willows and vines along the river
where white stone and heat glow
the fairest child of morning stands
her heart drumming like nighthawk’s wings.

Where white stone and heat glow
bees hover and die by the hundreds
her heart drumming like nighthawk’s wings,
the child who answers waits.

Bees hover and die by the hundreds
in the stillness just beyond memory
the child who answers waits
suffering in the heat and day drone.

In the stillness just beyond memory
the daughter of daughters feels the past
suffering in the heat and day drone
like a musty blanket of wish and wait.

The daughter of daughters feels the past
knowing the dawn of her very last morning
like a musty blanket of wish and wait
listening to winds, warnings, and foreign tongues.

Knowing the dawn of her last morning
down the long dark well of stopped time
listening to winds, warnings, and foreign tongues
in the willows and vines along the river. 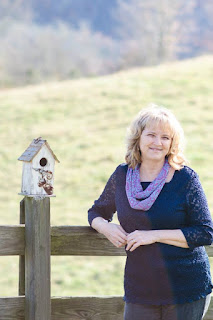 This experience taught me that I was very drawn to this type of call and response and echoing quality. My years in church growing up merged with my writing to find a commonality and a perspective that I had not previously thought about.  I did something new with my writing and discovered a direction I wanted to explore more. A big part of the challenge and the fun of writing poetry is the journey itself from the conception to the execution of the idea of the poem, watching the sometimes strange and unexpected path the work travels as it makes its way on to the page. (Left:  Rita Quillen.  Copyright permission granted by Rita Quillen for this CRC Blog Post only)

Where were you when you started to actually write the poems?  And please describe the place in great detail.   I wrote the initial draft of the poem – the list of questions and answers – at the Hindman Settlement School (https://www.hindmansettlement.org/)  in Hindman KY where the annual Appalachian Writer’s Workshop is held every August.  Specifically, sitting on the steps outside the old library building on campus where most of the classes were held.  It was an assignment due the next day for the poetry workshop led by noted Appalachian poet Jeff Daniel Marion.  (Right). 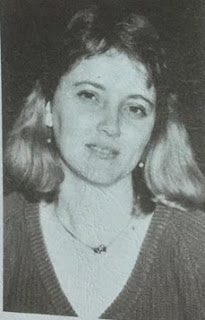 What month and year did you start writing these poems?   I am not sure of the year, but it should have been between 1985-87.

How many drafts of these poems did you write before going to the final? (And can you share a photograph of your rough drafts with pen markings on it?)   SORRY – just can’t remember – and can not find the original.  Ugh.  I have most of them saved away, but couldn’t find this one. 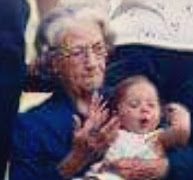 What do you want readers of these poems to take from this poems?   I think, aside from the obvious tribute to my grandmother (right.  Copyright permission granted by Rita Quillen for this CRC Blog Post Only), to the acknowledgement of her life passing, as a poet I hope people will note the lyrical language, the figurative elements of it, and to appreciate how the repetition of the pantoum form holds the sound and meaning so beautifully together.  I think modern poetry with its emphasis on free and blank verse sometimes misses out on the advantages and strengths that form can bring to a work. 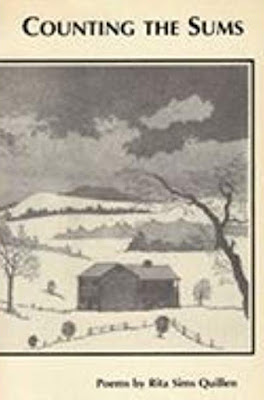 Which part of the poems was the most emotional of you to write and why?   All of it, really, thinking about my grandmother in her final moments, imagining her, though I was not there, seeing all of us in her final moments, in her mind’s eye, and all those who had gone before.
Have these poems been published before?  And if so where?   The poem was published in THE MOSSY CREED READER in about 1992, I believe, and then appeared in my first full-length collection COUNTING THE SUMS, from Sow’s Ear Press in 1995. 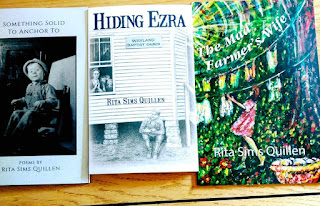 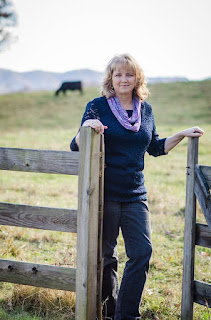 Rita Quillen’s new full-length poetry collection, THE MAD FARMER’S WIFE, was published in 2016 by Texas Review Press, a Texas A & M affiliation and was a finalist for the prestigious Weatherford Award in Appalachian Literature from Berea College. Her novel HIDING EZRA, released by Little Creek Books, was a finalist for the 2005 DANA Awards, and a chapter of the novel is included in TALKING APPALACHIAN , a scholarly study of Appalachian dialect published by the University of Kentucky Press in 2014. One of six semi- finalists for the 2012-14 Poet Laureate of Virginia, she received a Pushcart nomination in 2012 and 2015, and a Best of the Net nomination in 2012. (Left:  Rita Quillen.  Copyright permission granted by Rita Quillen for this CRC Blog Post Only)