***The CRC Blog welcomes submissions from published and unpublished fiction genre writers for INSIDE THE EMOTION OF FICTION.  Contact CRC Blog via email at caccoop@aol.com or personal Facebook messaging at https://www.facebook.com/car.cooper.7
*****All images are given copyright permission by Jeri Westerson for this CRC Blog Post only unless otherwise noted.

Name of fiction work? And were there other names you considered that you would like to share with us? The third in my paranormal Booke of the Hidden series is called Shadows in the Mist. I originally had it as Dancing in the Mist, with the visual in my head in mind of a sort of danse macabre, but my editor didn’t like it. Since it dealt with zombie Vikings (I KNOW!) emerging out of a mist they created, “shadows” seemed to work better, though there are a lot of titles like that, apparently. I guess we all prefer our mist with shadows.

Fiction genre?  Ex science fiction, short story, fantasy novella, romance, drama, crime, plays, flash fiction, historical, comedy, movie script, screenplay, etc.  And how many pages long? This one is a paranormal romance with a lot of mystery and humor. I wanted that sensibility, to offer the reader a romance, light comedy, some paranormal scary stuff, some pathos and drama, adventure—something for everyone. It’s 286 print pages long.

Has this been published? And it is totally fine if the answer is no.   If yes, what publisher and what publication date? May 14th from JABberwocky Literary 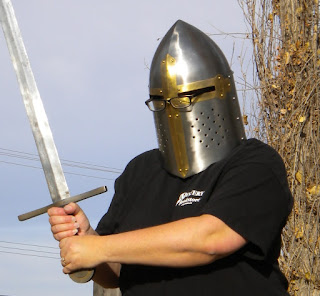 What is the date you began writing this piece of fiction and the date when you completely finished the piece of fiction? I started working on it May 2017, just getting the feel of what had to happen next in the series (I was probably working on my medieval mystery series at the time), picked it up again to work on it in earnest September 2017 and finished it January 2018. 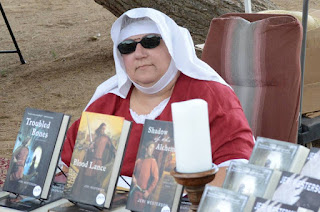 Where did you do most of your writing for this fiction work?  And please describe in detail.  And can you please include a photo? In my home office, a jumble of tchotchkes, reference books, and general messiness. 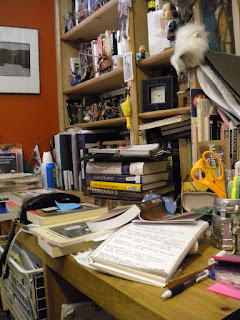 What were your writing habits while writing this work- did you drink something as you wrote, listen to music, write in pen and paper, directly on laptop; specific time of day? I generally start around nine in the morning—with coffee—and work a few sporadic hours, continuing after lunch. I sometimes listen to certain stations on Pandora, not always. I keep a journal for every book I write, just a cheap spiral bound Mead notebook from the store. In it is research, scenes, dialogue, arguing with myself what should happen next. I would be lost without my handwritten journals. But the book itself gets typed directly into my laptop. 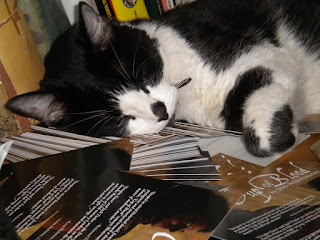 What is the summary of this specific fiction work? Tea proprietor Kylie Strange must capture deadly monsters she has unwittingly unleashed, while juggling the not-so-unwelcome advances from both an alluring and dangerous demon and the very human and handsome sheriff. But what are the lethal creatures seen in the mist around the little town of Moody Bog that haven’t come from the supernatural Booke of the Hidden? A ritual murder to solve, werewolves, and an assassin demon summoned to kill her…and now zombie freakin’ Vikings! Just another day in the life of Kylie Strange. 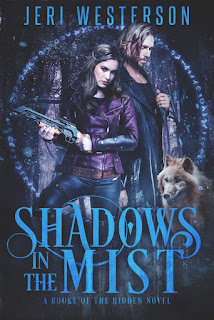 Can you give the reader just enough information for them to understand what is going on in the excerpt? Kylie is just an ordinary person who opened this ancient book bricked up in her 18th century wall—Booke of the Hidden—but when she opened it, it unleashed deadly creatures into her little village of Moody Bog, Maine, and it’s up to her to put them back. In the excerpt, she and her local coven who have been enlisted to help her, see a little girl change into a strange monster, and Kylie takes off after it to try to dispatch it…even when it jumps the fence into a cemetery. 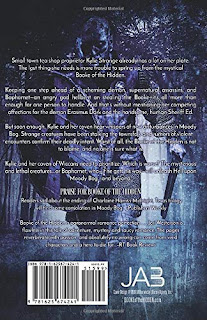 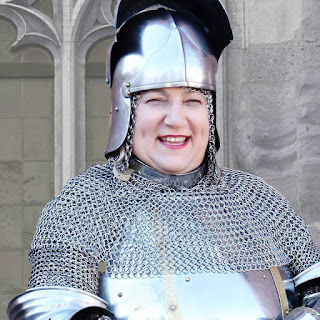 Why is this excerpt so emotional for you?  And can you describe your own emotional experience of writing this specific excerpt? I just liked the idea of this cute little girl, that suddenly does something really horrific. Bloody teeth, glowy eyes, and then falls down on all fours to take off running. So unnatural! So discomfiting! Kylie reacts to things like I would, only she has more courage to pursue them. I’d be running away, for sure. The idea of a ghoul—that feeds on dead children and then takes on their appearance—had that particular ick factor that I liked and also provided opportunities for a bit of humor too. Anything you would like to add? Writing is the best and worst job in the world. Best, because you, alone, are sitting with your thoughts and fantasies and weaving marvelous tales, the kinds of books you’d want to read, and putting your personal stamp on them. And worst because it pays so little. You work so hard for nine months on a book that you hope people will enjoy, and it’s still so tough to be discovered, even after all the books I’ve published from a big New York house, to mid-size to small publishers and self-publishing. It never seems to get any easier, and all the publicity falls on the author. That part really sucks. 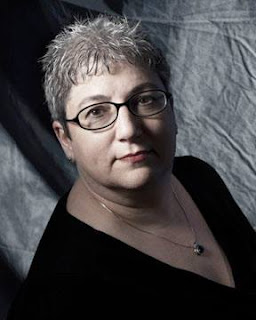 Los Angeles native JERI WESTERSON is the author of twelve Crispin Guest Medieval Noir Mystery novels, a series nominated for thirteen national awards from the Agatha to the Shamus. Her fifth novel BLOOD LANCE was named one of the Ten Hot Crime Novels for Colder Days by Kirkus Reviews, and her sixth, SHADOW OF THE ALCHEMIST, was named Best of 2013 by Suspense Magazine. For BOOKE OF THE HIDDEN, her paranormal romance series, Publishers Weekly said, “Readers sad about the ending of Charlaine Harris’s MIDNIGHT, TEXAS trilogy will find some consolation in Moody Bog.” The third in the series, SHADOWS IN THE MIST releases in May, and the last in the series, THE DARKEST GATEWAY, releases October 2019. Jeri was featured on two local NPR shows, ‘My Awesome Empire” and KVCR-Arts. She has served two terms as president of the Southern California Chapter of Mystery Writers of America, one term as vice president for the Los Angeles Chapter of Sisters in Crime, and twice president of the Orange County Chapter of Sisters in Crime.
You can find me and my books at
http://bookeofthehidden.com/
http://www.jeriwesterson.com/