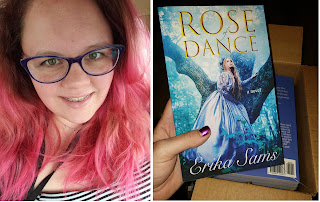 Name of fiction work? And were there other names you considered that you would like to share with us?   Rose of Dancé.  Originally it was "Wide Open Spaces" but after being confused with the Dixie Chicks song, it became a working title until settling with "Rose of Dancé" which captured the novel more accurately. 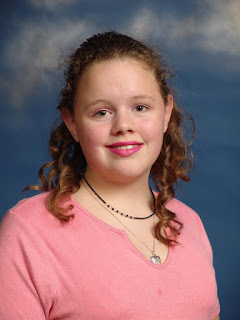 What is the date you began writing this piece of fiction and the date when you completely finished the piece of fiction?  Rose of Dancé began as a short story I wrote late one night in 2005 (Left). It evolved quickly and within weeks became a book. Due to some circumstances at that time, the book was put on the shelf for a couple years until I began writing it again long hand. Unfortunately, this version was destroyed in a small flood. 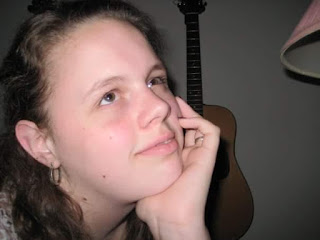 When I turned 18 in 2009 (Right) I wrote the entire novel and had a friend do a red pen edit. It was the closest I came to publication, but I didn't know where to go from there. 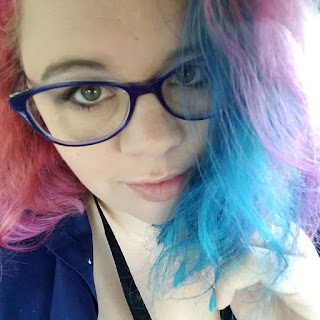 Finally, in January of this year 2018 I decided it was time to start again and publish Rose of Dancé. The first draft was completed in 2 months, (I started completely from scratch, the story had never left my head.) All in all, it took 9 months to begin writing and finally reach publication--the last time. 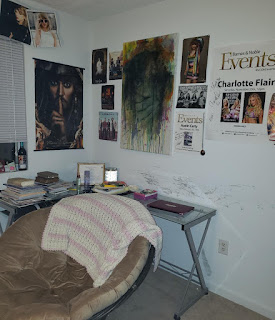 Where did you do most of your writing for this fiction work?  And please describe in detail.  And can you please include a photo?   We have an extra room in our home for me to work, I call it "Ucornia" (Right). It's filled with things that make me happy from posters to candles to figures. I would say most of my time writing was spent either there, or at the local diner where I would always leave an extra good tip so they wouldn't mind me coming back to sit for hours. Starbucks is also always a good idea. 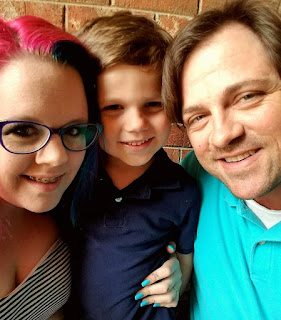 What were your writing habits while writing this work- did you drink something as you wrote, listen to music, write in pen and paper, directly on laptop; specific time of day?   I carried my Mac with me everywhere and wrote literally anytime I had time. I work a full time job, am a wife and have a 6-year-old son, so my time is very limited. (Left:  Erika with family) Even if it was 10 minutes in a waiting room waiting for an appointment, I would pull out my Mac and be typing away with the time I had. 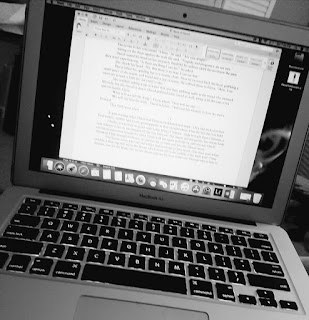 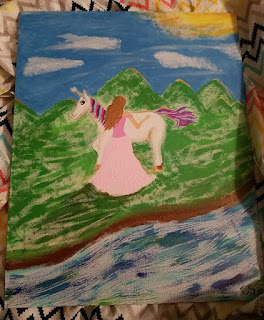 What is the summary of this specific fiction work?  The story begins with the birth of Princess Christine to King Michael and Queen Anna of the kingdom of Dancé. Joy fills the Kingdom, and a great ball is held in celebration. In the middle of it all, Dancé is overrun by the Demaras who despise the happiness of Dancé. The attack is swift, and the only survivors are David and Elena—close friends to the King—and the baby Princess. (Left:  Painting by Erika Sams)
The survivors find refuge in Hanton, a nearby Kingdom. They are taken in and, with the council of King Luke, decide to keep Christine’s identity quiet until she is of age. Prince Thomas of Hanton, along with a group of his men, work to rebuild Dancé which has been burned to the ground.
Christine grows as the daughter of David and Elena, who also give birth to a son named Jack.
Christine feels lost, like an alien in Hanton and in her family. Days before her eighteenth birthday and the revelation of her true identity, a tragedy touches Christine. More lost than ever, Christine decides to run away, hoping to find her truth out in the world.
Her kingdom is ready, but she cannot be found. There is love, heartbreak, an evil queen and so many questions to be answered.

Can you give the reader just enough information for them to understand what is going on in the excerpt?   Christine is the rightful Queen to the throne of Dancé, which she does not know. At the time of this excerpt, she is only ten and playing with the boy she knows as her little brother. 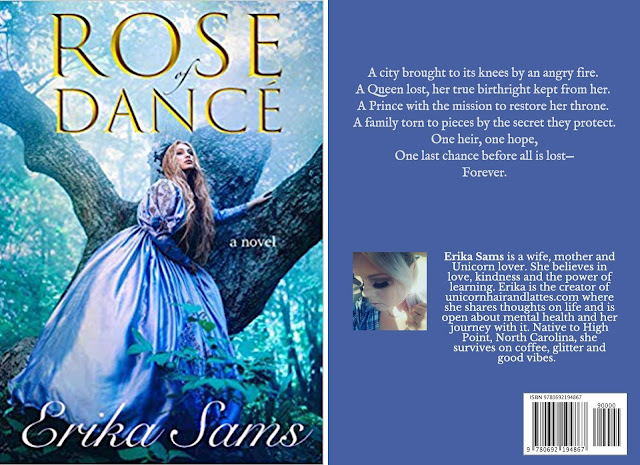 The sky was a perfect baby blue, the sun warm and bright, its rays shining down on Christine. She ran free and happy through the grass, her bare feet sinking into rich soil, long blonde curls bouncing behind her. She laughed and turned back to see her brother Jack, a year younger but almost as tall, his hair shaggy and dark, thin legs try to keep up with her sprint.
“Hurry up, slow poke!” she laughed at her brother, not stopping to let him catch up.
“One day, I’ll catch you,” he told her, giving it everything he had to go faster.
“Never!”
She threw her arms out beside her, turning in a graceful spin without losing momentum.
“How do you do that?” Jack called to her.
“I don’t know,” she replied. “My feet just take me.”
She reached the tree they were racing for and immediately began to climb.
“I’ve got you now,” Jack said. “You know I’m the better climber.”
It was true. He didn’t have her speed, but he could hide from wolves in a tree. Gasping for breath, they hopped on the tallest branch that supported them, Jack making it just as Christine did. They both laughed in childish glee.
They were facing away from the city, perched high in the tree where they could see for miles. “I wonder what else is out there.”
“Trees,” Jack said, “and somewhere beyond that, people. Father says no place in the world is as beautiful and happy as here though.”
“Father says a lot of things,” Christine scoffed. “You don’t think about seeing for yourself? You don’t imagine one day, when we are older, going to find out what is beyond those trees? Just taking your horse and riding until you have nothing left? Perhaps meeting a witch or a unicorn.”
“Bedtime stories, Christine,” Jack said, trying to sound older than he was. “When are you going to grow up?”
Christine gazed out at the world, her eyes sparkling with the possibilities. “The stories came from somewhere. Perhaps I would meet a prince, and he would fall in love with me. I would be his princess and we would live happily ever after.”
“A princess?” Jack looked disgusted. “You could never be lady enough for that.”
“I could!” she objected. “I would be the greatest princess there ever was.”
“Prince Daniel seems to fancy you,” Jack said.
“Prince Daniel will never be king,” Christine said. “I would have to marry Prince Thomas.”
“Prince Thomas?” Jack looked at her like her head had flipped around. “He’s nearly thirty! And you’re barely ten. Father would never approve.”
Christine leaned on a branch looking dreamily at the sky. “I wonder where he goes on those long trips of his? He is gone for weeks, months at a time. Perhaps he goes to meet princesses, looking for a wife, and they’re never good enough. Or fights filthy pirates at sea.” She leaned her cheek to her hand with a swoon. “He is so dashing.”
“Yeah,” Jack laughed, “for an old man.”
Christine scrunched her nose at him. “Have you no lady you fancy?” she asked.
Jack’s cheeks went red, and Christine’s eyes widened with a new excitement. “Oh you do, don’t you? Who is she?”
“I’m not telling,” Jack objected.
Christine squealed and clapped her hands. “I will have to look out for her now. Oh, it’s so exciting.”
“It’s nobody,” Jack tried to convince her, but she wouldn’t hear it. She was lost in her happy dreamland.
A trumpet sound captured their attention. Christine clapped again. “Oh! Prince Thomas is back from his trip.”
She was scurrying down the tree immediately.
“I wonder if he brought home a lady,” Jack said, his feet hitting the ground seconds before Christine.
“Don’t tease,” Christine scolded, and they were both off. 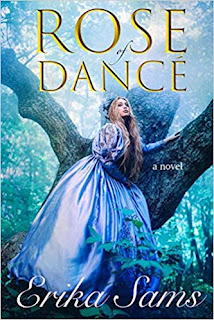 Why is this excerpt so emotional for you?  And can you describe your own emotional experience of writing this specific excerpt?   First, seeing the dynamic between the two I think is heart warming. On the other hand, you see Christine’s spirit, her need for more, her almost instinctual knowledge that there is more to her than a simple life. She dreams of marrying a prince when she is in fact a queen, and Prince Thomas’ long trips are spent rebuilding her castle and kingdom. 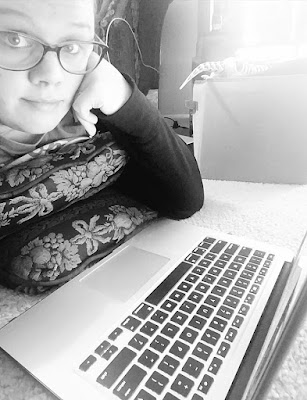 Were there any deletions from this excerpt that you can share with us? And can you please include a photo of your marked up rough drafts of this excerpt.   As this was on the computer, I do not. However, I do not believe anything was cut from this particular scene. 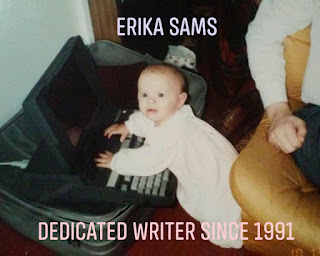 Anything you would like to add?   If I can take a dream I had from when I was a teenage and make it happen as a working adult with a family, you can do anything! You are only limited by excuses. Find solutions and break down barriers. It may take time, but be patient and don’t give up until you see your dreams come true. And then set a new goal. There is no limit to what you can do 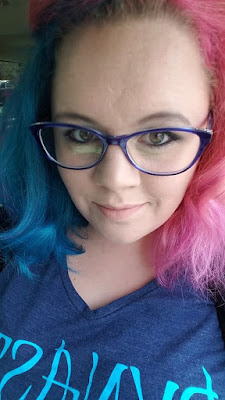 I’m a wife and a mother to one amazing son. By day I work for a home healthcare company. In the office, not in the field. I have so much respect for nurses, but I get queasy thinking about it!
I believe in the power of love and positivity and try to spread both in my daily life. Additionally, I am very open about the topic of mental health and share some of my perspective and experiences on my website.
The secret to my shine are coffee, glitter and good vibes! (Above Left:  Erika April 2018)

Posted by Chris Rice Cooper Blog at 10:59 AM