*Please note: I am more Transcendentalist than traditional half-Christian (who is half-Jewish). 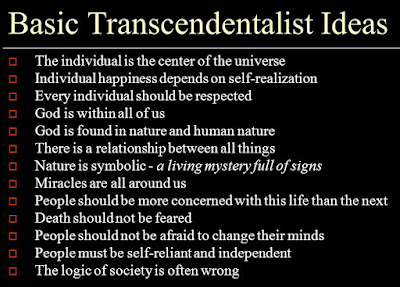 My Christian mother was, or at least presented to her daughters as, disinterested in the traditional story of flesh and nails, but moved by a story of healing, love, caring for each other, peace, and a symbolic interpretation of resurrection. Something happened back then. Whatever it was, however, is less important than whatever ongoing solace or peace it offers. 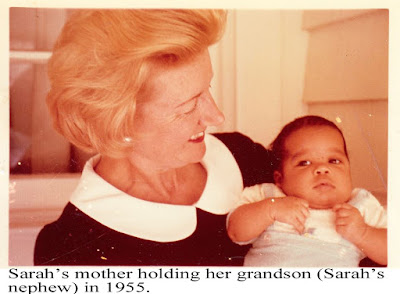 Some friends avoid Medieval and Renaissance art because they don’t want to be “accosted” by Christian art’s strangeness. I get it, but I think it’s a misunderstanding. I don’t, by way of example, study a portrait by Rembrandt of some rich jerk I’ve never heard of because I admire the rich jerk, but because of the story, the revealing of shared humanity.

Can you go through the step-by-step process of writing this poem from the moment the idea was first conceived in your brain until final form? Where were you when you started to actually write the poem?  I was wandering the Met Museum (NYC) and paused at “The Entombment” (Moretto da Brescio; Italian; 1600s). 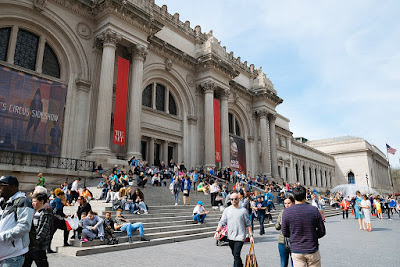 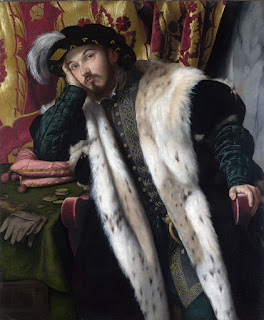 I was interested in the faces, each its own portrait, in the differences in expressions of grief, the contrast between the men and women. Joseph of Arimathea and Nicodemus seemed almost stern, while Mary and Mary Magdelan’s faces revealed suffering, something both genders were feeling. I was moved by the depth the women revealed and, also, their ability to bend (which I see as emblematic of emotional flexibility), in contrast to the stiff posture of the men. 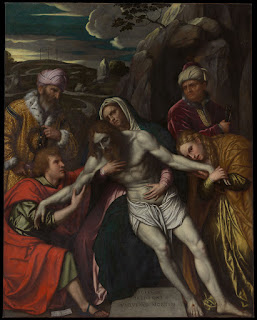 St John, resting on one knee, is more open than the other two men, but, hey, he’s a saint and fairly young. I sat on a bench opposite the painting in this large, grand gallery, grabbed a pad from my bag and began to try to capture, in poetry, what I saw—grief, love, dissimilarity. The women’s faces as openly revealing; the men trapped in an inability to express crushing grief. I could be projecting. I could be misunderstanding conventions of the time. Who knows, definitively, what is happening in any work of art. How great we can react, learn, build on our reactions, discuss them, forget them, relearn. 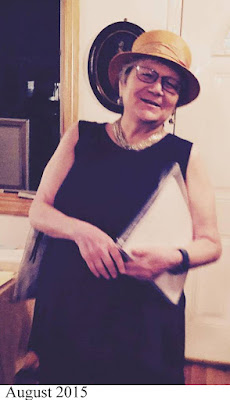 What month and year did you start writing this poem? How many drafts of this poem did you write before going to the final? Best I can figure out, I began writing the poem in 2015. While I sometimes print out drafts, I no longer save them once I’ve moved on to another draft. I always have one document on my laptop which contains all the poems I’m working on at any one time. So right now, I have a doc. in Word titled “PoemsSept-Dec2018” which has 42 pages of poems. It’s the only way I can organize. When enough of the poems have been accepted or retired, or, when I have enough new work I’m getting confused by the presence of older poems, I archive these documents in my “Old Drafts of Poems” file folder. 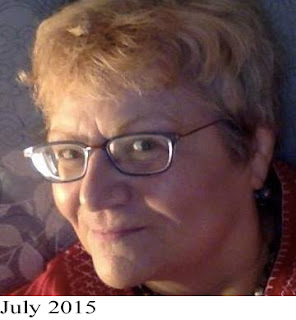 Because of the process of working and reworking on one document, typing over, deleting, my process is to simply work on what I have before me. Every so often I will consult a previous document of drafts, but most of the time, not. 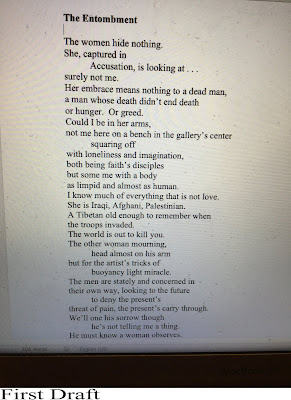 Were there any lines in any of your rough drafts of this poem that were not in the final version?
And can you share them with us?  Now, and before the contest, the poem ended with this stanza:

In so-beautiful her arms, his so-body
is a splay of too much beauty to be real.
If it is to be of any value,
a story will be misunderstood.

The final two lines aim at expressing my concept of religion, and of story (a religion unto itself) in general. Interpretations are ongoing, right, and wrong. The painting that inspired “Promises Had Been Made” depicts Europeans, not more authentic-to-the-story Semites or North Africans. For a start. 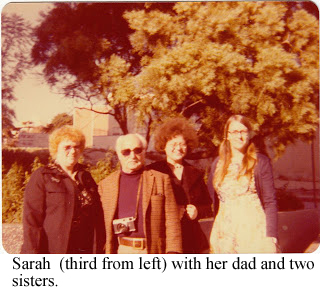 What do you want readers of this poem to take from this poem? Varies. Today it is that grief never ends. I overheard a woman talking about the death, ten years ago, of her mother, talking with an intensity which, at first, annoyed me because: ten years. Get over it, already. But that’s how we grieve: whenever/however. I’d forgotten that I struggled for years and years with my father’s death; miss my mother although the struggle wasn’t as hard; c) kept searching out ways to grieve my sister’s death; and d) work on grief, with its resurgences. Love is a thing. Grief is a thing. Allow intensity into your life. Whatever it is that enlarges you – that’s a spirit. 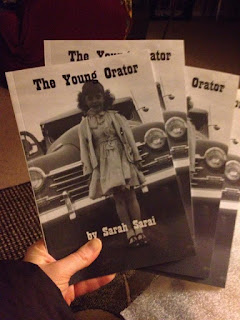 Which part of the poem was the most emotional of you to write and why? The question presumes writing is emotional. It is a struggle. For sure. And that’s all I have to say about this.
Has this poem been published before?  And if so where? “Promises Had Been Made” was selected by Helen Losse, a poet and much respected editor, for Chris Cooper’s Personal Lord Jesus Christ Savior Contest.
https://www.facebook.com/HelenLosse 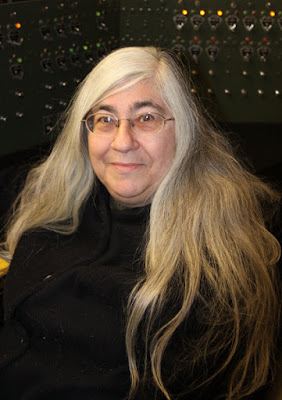 Anything you would like to add? Thanks, Chris, for the opportunity to write about my poem and for this feature of your blog. Also, thanks to Trish Hopkinson (Left) (https://trishhopkinson.com/, whose listing of places to submit included Chris’ contest. 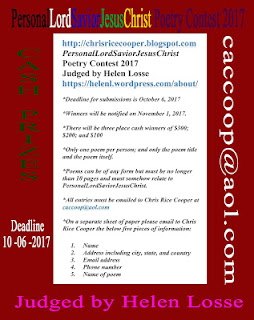 And finally. Winning the Personal Lord Jesus Christ Savior Contest was an honor – I was surprised, happy, grateful. I loved the contest title which was a little out there – deliberately so, I thought. I understood it wasn’t speaking to the Southern Baptist Convention (which just apologized for their involvement in slavery). It wasn’t about or for homophobic evangelicals who bring their hate to far corners of the world or right-wingers who use the word “Christian” when they mean to use “racist” or “close-minded” or “haters of the poor and meek.” It wasn’t about the Knight Templars murdering Muslims and Jews, or the Popes who refused to okay birth control and thus are responsible for at least 20 MILLION deaths in Africa from AIDS. If anyone local (NYC) is curious, they can ask me, radical, leftie me, about my lifelong interest in, affection for religion. ###

Promises Had Been Made

On “The Entombment” by Moretto de Besco

The women hide nothing.
She, captured in
accusation,
a collaborative creator.

Her envelopment has no meaning
to a dead man
whose death won’t
even end death.
Promises had been made.

Would that be me in her arms?
Not me here on
a bench in the gallery’s center
squaring off
with loneliness and imagination,
both being among art’s disciples.

But some me – with a body
almost human as his.
I know much of everything
but not enough.

An other Mary,
head lowering to his arm –
his conjuration of a once life
– touching but for
the confident artist’s oils of
celestial buoyancy.

The men are concerned in their way,
eyes averted from mine.
I’m no Mary.
Loyal middle-management, they deny
the present’s threat of pain,
the present’s carry-through

He is translucent in her arms,
an embodied splay of
too much beauty to be real.

If it is to be of any value,
a story will be misunderstood.

Sarah Sarai was born in New York State, has lived in Los Angeles, San Francisco, Santa Fe, Seattle, and, since 1995, New York City. Geographies of Soul and Taffeta is available from Indolent Books. The Future Is Happy from BlazeVOX. Over twenty of her short stories have been published in literary journals. She is a freelance editor of nonfiction, fiction, and poetry and is available for hire, although please understand, this is how she pays her rent. If you want a freewill offering, seek elsewhere. 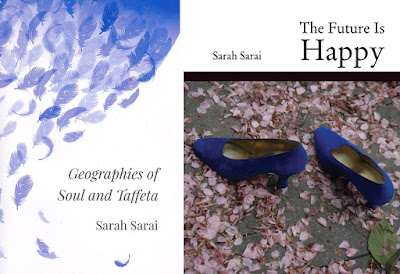 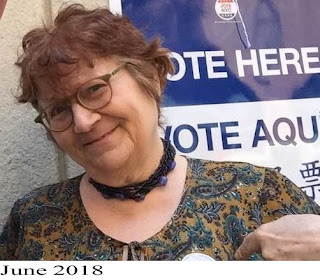 You could like my Facebook page, “The Future Is Happy: Fiction & Poetry of Sarah Sarai,” then leave a message. Also, I’m @farstargirl on Instagram. And a person could always leave a message on my blog, My3000LovingArms. Your message will be directed to me.