#19 Backstory of the poem "Stiletto Killer . . .A Surmise" by Alexis Rhone Fancher 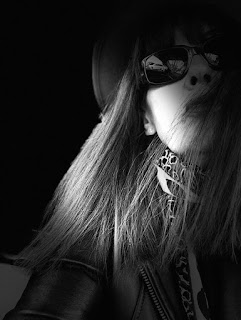 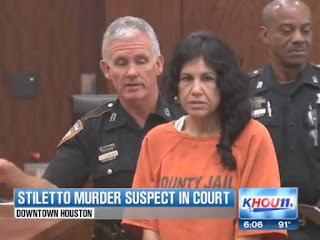 Can you go through the step-by-step process of writing this poem from the moment the idea was first conceived in your brain until final form?  I read about the murder in an online newspaper, shortly after it occurred. The story intrigued me and kept bouncing around in my head. I wrote several pages of notes, many of which ended up in some form in the final poem.  There were six drafts of this poem, written over several months, before I was satisfied.  (Above Left, Title Photo - Self portrait of Alexis Rhone Fancher in March of 2018)
Above Right:  Photo of of a news clip of Ana Trujillo) 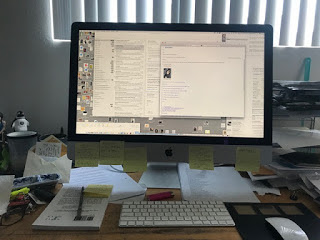 Where were you when you started to actually write the poem?  And please describe the place in great detail. 99% of the time I am writing at my desktop computer in my studio. This poem was no exception. I also do all revisions on the computer. 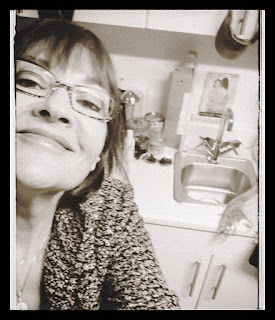 What month and year did you start writing this poem? March, 2014 (Right:  Self-portrait of Alexis Rhone Fancher in November of 2014)

What do you want readers of this poem to take from this poem? That 1.) under the right circumstances, anyone can murder, and that 2.) Women are always losers in Texas. 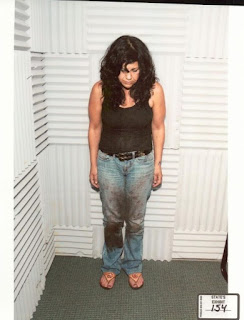 Which part of the poem was the most emotional of you to write and why? "In that green dress she looked like Christmas.” I kept seeing Ana, covered in Alf’s blood, all red and green - Christmas colors. Chilling. (Left:  Ana Trujillo in custody.  Photo attributed to the Harris County Sheriff's Office) 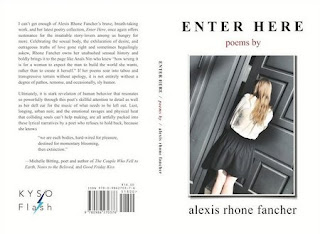 Has this poem been published before?  And if so where? “Stiletto Killer” was first published in 13 Myna Birds, http://13myna.
blogspot.com in 2014. It also appears in my most recent, full-length collection, ENTER HERE, (KYSO Flash Press, 2017). https://www.amazon.com/Enter-Here-Alexis-Rhone-Fancher/dp/0986270377/

Anything you would like to add? This poem is my interpretation of actual events. Not what actually occurred. The only people who know that are Ana and Alf, and Alf’s not talking...
I am a news junkie. Human interest. Murder stories especially fascinate me. And this one, in which a tiny, Hispanic woman in Houston Texas stabbed her Swedish professor boyfriend to death with one of her stiletto heels, stabbing him 30 times, was as dramatic as they come.
I do research for my poems, especially the ones about actual events. Often I have pages and pages of notes and quotes. The poem is lurking within them, a distillation. Facts become commentary in my hands. And commentary becomes, in this case, outrage. “Women are always losers in Texas” is an observation, not only about Ana Trujillo, but about how the court system in Texas favors men. (I watched a friend go through a divorce in Texas, and witnessed her getting royally screwed, first hand.) That’s the line in the poem that gets the most attention. Maybe because it has the ring of truth.
The poem weaves “facts” about the murder with my “fantasy” about how it went down. When I read “Stiletto Killer” at poetry events, it always gets an intense response.

“She told me if anybody screwed with her they’d get a stiletto heel in the eye,”
- her former apartment manager told the TV news.

Alf and Ana drank tequila at the club until closing.

Ana wore a tight, green dress. Alf said she looked like a whore.

Back at the apartment, the neighbors heard screams.

“The defense will prove she was a battered woman,” her lawyer told the press.

She was too short when the stilettos came off but her feet ached.

She had to stand on tiptoe to reach him, for Christ’s sake.

Women are always losers in Texas.

Ana alleged: “He cursed in Swedish when he beat me.”

She’d read Swedes beat their women in The Girl With The Dragon Tattoo.

In the early morning hours, Ana stabbed her lover thirty one times.

The stiletto heel fused to her fist.

When the police arrived Ana was covered in blood.

(CNN) -- It may have been a vicious murder or the unintentional result of a
lover's quarrel. Either way, the death of a Texas college professor stands
out for the weapon the killer allegedly used: one of her own stilettos. 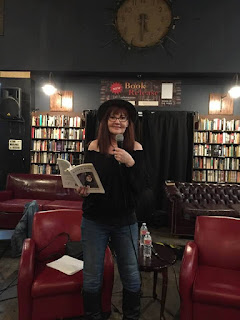