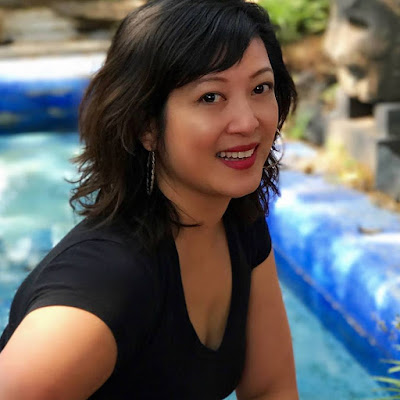 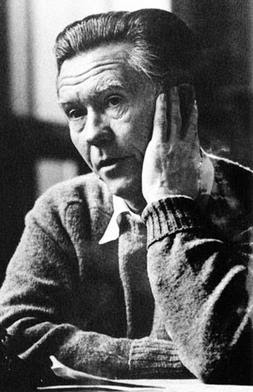 Can you go through the step-by-step process of writing this poem from the moment the idea was first conceived in your brain until final form?  The kernel for this poem came from a William Stafford poem I’d read years ago called, “What’s in My Journal.” I liked the way he wrote about the things of daily life, and by the simple act of listing and ordering these things, how he somehow infused them with greater significance. (Above Right: photo of William Stafford attributed to Christopher Ritter) 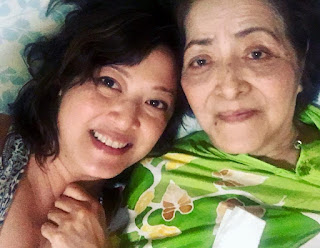 Inspired by Stafford’s poem, “What I Learned This Week,” is a curated list of ideas, images, thoughts I had accumulated over the period of a week. At the time, I had just come back from Manila after visiting my mother who had been diagnosed with Alzheimer’s disease a few years prior. (Left Angela Narciso Torres and her mother Carmen in January of 2018) 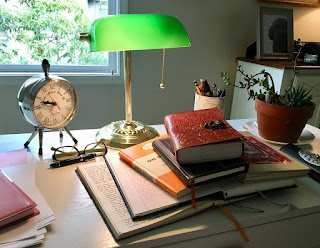 To write this poem, I literally went through pages of my journal and picked out lines I’d written about things that happened to me or that I came across that week which seemed to resonate with my emotional state then. In selecting the items, I was consciously or not choosing events in nature that were in the process of death or decay. I used these items to couch and somehow amplify the central theme of the poem: the mother’s loss of memory/physical coordination/language and the speaker’s yearning for connection with these aspects of the mother that were slowly disappearing. Above Right - Angela Narciso Torres's journals. 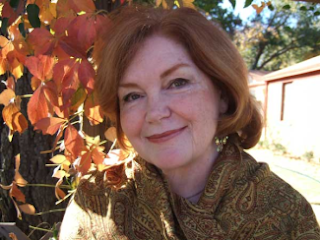 In ordering the items for the poem, I thought of something a poetry teacher (Mary Leader) (Left: photo attribution Sara Leader)  once said about list poems. She said a list poem should have an intrinsic logic in the mind of the writer but unbeknownst to the reader. So on the surface, the list may look random at first glance, but upon reading the poem more attentively, one feels a kind of inevitability in the order of things. In this case, I ordered the list to build up, by accumulation, a sense of growing despair or heightening emotion, peaking at scene between the mother and daughter. That section is the longest “item” on the list of things the speaker learned that week, needless to say, being the most significant to the speaker. 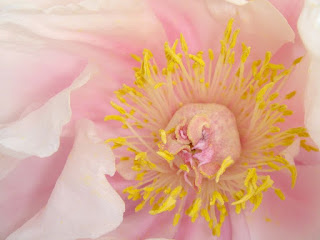 This is followed by the item about the thwarted peonies, which gives us a temporal marker for the speaker returning from the visit with the mother. So it still somehow continues the narrative while fulfilling the requirements of the list.  (Right Paeonia suffruticosa, showing the disk that encloses the carpels.) 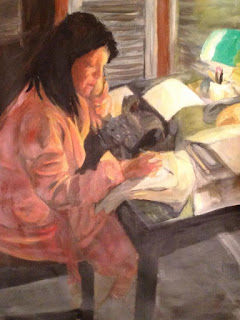 The last line, “A bud that does not bloom is called a bullet” is something that both ties in with the peonies line but also fits as a piece of “trivia” learned that week (which I did—though of course that’s inconsequential to the poem). The three hard “b” sounds (bud, bloom, bullet) in the final line gives a sense of closure while also echoing the earlier themes of decay, loss, impending death.  (Left Painting attributed to Matt Torres) 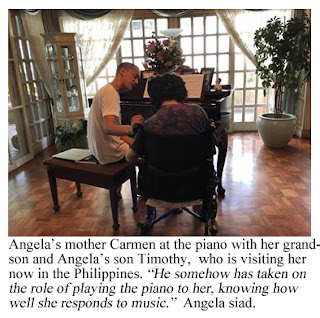 Which part of the poem was the most emotional of you to write and why?  It’s easy to guess that in this poem the most emotional part for me to write were the lines about my mother. Sometimes it’s even hard for me to read that part aloud to an audience without choking up. I still remember that moment I discovered my mother and I still had that musical connection, even though her language was mostly gone. We were sitting at the piano together and she literally started plunking out the violin part on the piano keys (I was practicing the accompaniment). 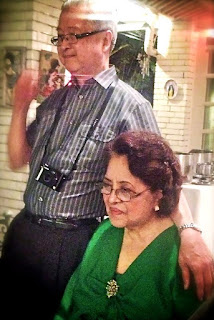 She used to accompany my Dad’s violin, but because she could no longer play, I became my Dad’s accompanist whenever I would go home to visit. This piece, Ave Maria by Bach-Gounod, was their favorite to play together. When she struggled to play those notes for the first time, I literally started shedding tears at the piano.  One reason I think I chose the list poem to write about this heightened emotional experience is because the structure allows you to diffuse the focus a bit. I don’t think I could write about this moment in any other way that didn’t veer dangerously into sentimentality.  (Left  Angela's parents) 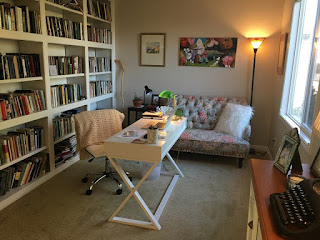 What do you want readers of this poem to take from this poem?  (Right Angela's office) That’s a difficult question because I mainly wrote this for myself in hopes of preserving that poignant moment I shared with my mother, which, like so much else about her, was in danger of 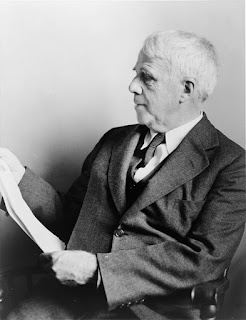 fading away. I suppose what I’d hope is that the reader experiences the power of a poem—in this age, a list poem which seems just a random list of facts—
to hold and preserve and even recreate an emotional experience. I hope they feel some of the original emotion that spurred this poem. As Frost (Left) once said, “No tears for the writer, no tears for the reader.” At the very least I hope they enjoy the pleasures of the list poem, and its potential to build, by 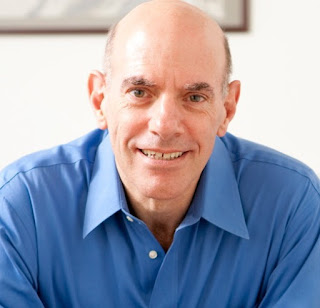 accumulation, an emotional effect.  Lastly, I really hope they enjoy and appreciate the discovery of that  last line as much as I did.  Honestly, the line came to me like a surprise gift when I was writing this poem. Although it’s a botanical fact, I found it in a book of meditations by Mark Nepo (Right) which I happened to be reading at the time. Such is the magic of poetry.

Has this poem been published before?  And if so where?
The poem was published in the Spoon River Poetry Review.

WHAT I LEARNED THIS WEEK

There are no more fireflies in Northern Indiana.
Marine life in Lake Erie is dying out because

seven trees on our street that workers will axe
next week. Ash borers have eaten them alive

so they cannot absorb water or light. This week I learned
my mother is losing dexterity in both hands.

But when I play Bach’s Ave Maria on the piano,
she motions me to move her wheelchair closer.

She leans over the keyboard to try the melody, finding
the right notes each time. Her fingers can barely strike

the keys, but I hear them. Some say music memory
is the last to go. Still, I have no windfalls

for the empty baskets of my mother’s eyes.
When I returned from Manila, the peonies I’d left

in half-blossom were thwarted by summer storms.
A bud that will not bloom is called a bullet.

Posted by Chris Rice Cooper Blog at 8:54 AM