*Below Black and White Photo of Bill Yarrow in April of 2018.  Copyright permission granted by Bill Yarrow for this CRC Blog Post Only 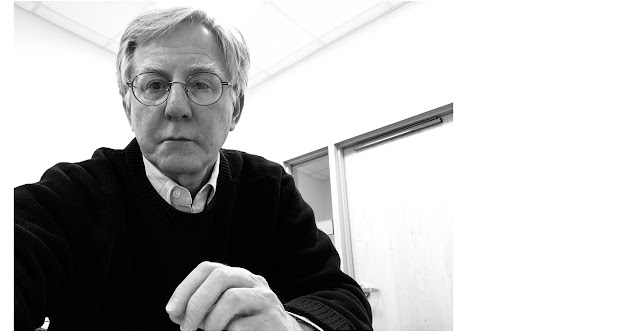 Can you go through the step-by-step process of writing this poem from the moment the idea was first conceived in your brain until final form?  I had been writing a series of "bad uncle" poems, persona poems in the voice of a young nephew whose iconoclastic uncle was filling his head with offensive, often blasphemous, notions, vile interpretations, and noxious ideas. I got the idea of Jesus as the first zombie and the poem just snowballed from there. Its first and final form were remarkably similar. In all the versions, the unnamed nephew was the speaker. The other characters, his uncle and his father, were there from the start. The uncle's name did change from Uncle Nat to Uncle Shaw to Uncle Ned in the final published version in Blasphemer, which came out on March 12, 2015 from Lit Fest Press. There were some other purely typographical changes related to how to format the dialogue in the poem. (http://www.festivalwriter.org) 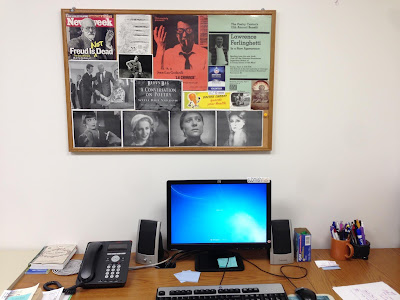 Where were you when you started to actually write the poem?  And please describe the place in great detail.
I wrote "Jesus, Zombie" after class one day in my office at Joliet Junior College.  The office is off of an interior corridor so there are no windows in it, but it's spacious and the floor is carpeted. I share my office, so there are two large desks with desktop computers on each, two rolling chairs, two file cabinets, and eight bookshelves mounted to the wall. The walls are bare except for two bulletin boards.  (Left:  Bill Yarrow's office at Joliet Junior College.  Copyright permission granted by Bill Yarrow for this CRC Blog Post Only) 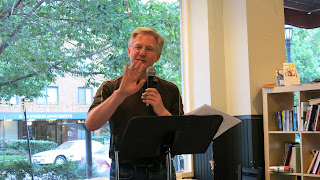 What month and year did you start writing this poem?
September 2014. (Right:  Bill Yarrow April of 2014. Copyright permission granted by Bill Yarrow for this CRC BLog Post Only) 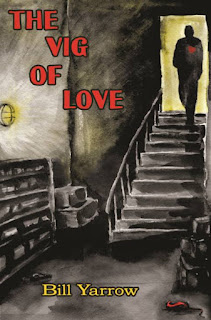 How many drafts of this poem did you write before going to the final? (And can you share a photograph of your rough drafts with pen markings on it?)  The poem went through twelve drafts. Unfortunately, I cannot share a draft with pen markings on it as I always write and revise on the computer. I save all of my revisions on the computer. I never print out my work to revise it in pencil or pen. 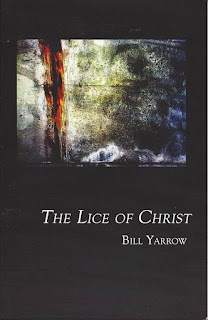 What do you want readers of this poem to take from this poem?  I never think of my poems in that way.

Which part of the poem was the most emotional of you to write and why?  The part where the father runs up the stairs to protect his son from his brother's blasphemy. The emotion surrounding protection is longstanding and profound. Poor Hamlet! No father to protect him from his wicked uncle! 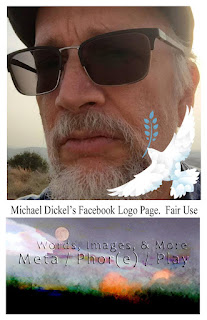 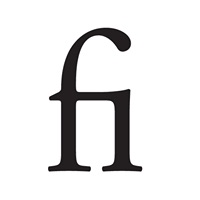 Anything you would like to add?  If sacrilege offends you, please do not read my poem.

"Jesus was a zombie?" I ask, shocked.
My uncle turns towards me with a look
of red surprise on his face. Absolutely!
He was the King of the Zombies. He was
one of the first to die and then come back
so he's among the original undead. Sly
zombie. Very crafty, let me tell you—
gets people to eat his body and drink
his blood, and when they do, they belong
to him—forever! He not only eats their
brains, but he also devours their hearts,
and then they can never die. Watch out
for this Jesus fella. He's coming after you.
And he'll never stop chasing you down.
"What'll I do if I see him?" I ask, shaking
in my chair. Cross your fingers like this—
that'll make him think you're one of them,
and he'll leave you be. "What lies are you
telling my boy?" my dad shouts running up
from the basement. He grabs Uncle Ned
by the shirt, jerks him up, and starts to
choke him. Hey, take it easy, brother!
Just teaching the kid to fear the Lord. 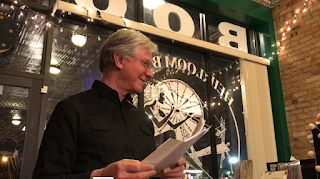 Bill Yarrow, Professor of English at Joliet Junior College and an editor at Blue Fifth Review, is the author of The Vig of Love, Blasphemer, Pointed Sentences, and five chapbooks. He has been nominated eight times for a Pushcart Prize. Against Prompts, his fourth full-length collection, is forthcoming from Lit Fest Press in October 2018. (Right:  Bill Yarrow in April of 2018.  Copyright permission granted by Bill Yarrow for this CRC Blog Post Only)


Posted by Chris Rice Cooper Blog at 9:23 AM