#13 Backstory of the Poem Jan Steckel's "Holiday on ICE" 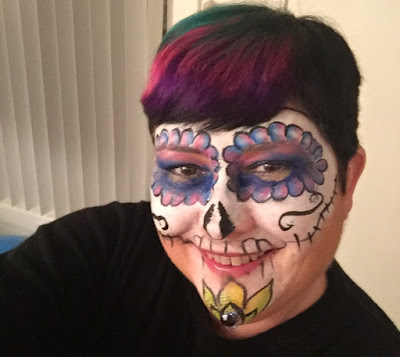 Backstory of the Poem
“Holiday on ICE”
by Jan Steckel
http://www.jansteckel.com

Can you go through the step-by-step process of writing this poem from the moment the idea was first conceived in your brain until final form?   I have several Latino neighbors with small children, and one of them was the model for the child in this poem. The child and I were talking about the English and Spanish words for something, and then she told me the word in Mam. I asked her what Mam was. She said it was a language. I asked who spoke the language, and she said her mother and father and two brothers and she did. So I looked it up, and found that it was a Mayan language spoken in Chiapas and in Guatemala. One of the child's parents is from Mexico and the other from Guatemala, so that made sense. (Photo Right attributed to Christal Ann Rice Cooper) 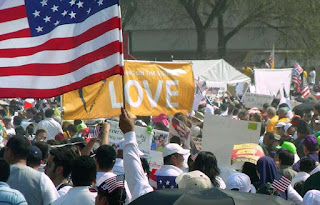 I also have signed up for a lot of alerts from immigrants' rights groups so that I can show up for demonstrations, etc. One of them gives me text alerts on my phone warning about immigration checkpoints.
Protesters call for immigration reform at the March 21, 2010 March for America protest in Washington, DC. Attributed to Border Community Action). 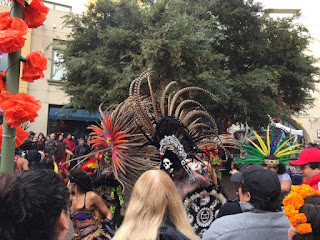 My neighbors put a chili plant in front of their door when they moved in. The Fruitvale, the Latino neighborhood of Oakland adjacent to my own neighborhood, has a shop with tin ornaments. And one of the Latino families on my street gave me a bucket of tamales near Christmas that were delicious. (Right Day of the Dead Parade in Fruitvale) 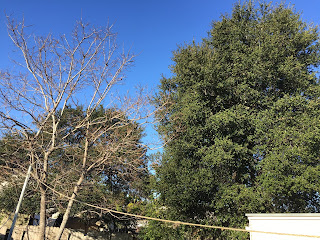 I keep a list of ideas for poems, and the penultimate stanza about the sun hitting the fence and turning the clothesline pole into a sundial came from that list. That and the fat squirrel and all the acorns is what I see when I sit in my back yard every morning drinking coffee and petting our cat. We have two California live oaks back there. That was the prompt that started the poem off for me on the day that I wrote it. (Left Photo attributed to Jan Steckel's of her backyard with the two California live oaks) 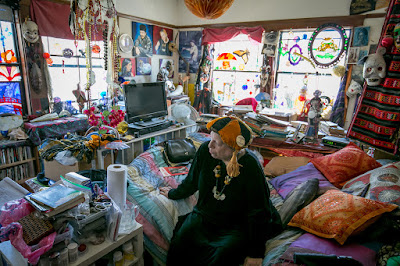 Where were you when you started to actually write the poem? And please describe the place in great detail.   I was at the apartment of my friend and poetry mentor Julia Vinograd when I wrote this poem. It was near Christmas, and all these elements came together to make this Christmas poem. Julia's disabled and gets HUD housing, an old studio apartment with a galley kitchen and a walk-in closet that leads to the bathroom. Julia has a horror vacui, a fear of emptiness, and every bit of space on her walls is covered with art or memorabilia. Even the windows are decorated with stained glass pieces. She's particularly into skeletons, skulls, masks, gargoyles, Bosch, the pre-Raphaelites, colored glass globes, and rubber rats and snakes. The place is a giant incubator for the imagination. (Upper Right - Photo of Julia Winograd attributed to Robert A. Fischer)

What month and year did you start writing this poem?   December 2017

How many drafts of this poem did you write before going to the final? (And can you share a photograph of your rough drafts with pen markings on it?)   Just a couple of drafts. Sorry, I don't have the old ones. I just correct the document on my computer.

I am trying to find what a chili tree looks like? Or what the scientific name of a chili tree is?   I was wrong! it's not really a tree, but more like a bush. So I changed the word "tree" to "plant" in the latest version below. 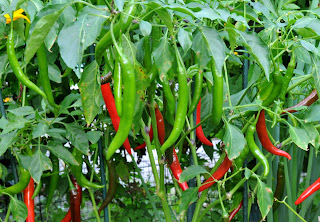 Were there any lines in any of your rough drafts of this poem that were not in the final version? And can you share them with us?   Well, the chili plant (Right) was a tree, which is wrong, as you tactfully pointed out, so now it's a plant.

What do you want readers of this poem to take from this poem?   I want them to see through the small girl's eyes, the warmth of her family, and see the threat to her family posed by Immigration and Customs Enforcement (ICE). (Left - Photo of Small Girl's Eyes attributed to Jan Steckel)

Which part of the poem was the most emotional of you to write and why?   Probably the stanza about immigration checkpoints. I get very agitated about my friends and neighbors getting arrested or thrown out of the country. (Right Photo attributed to Border Community Action) 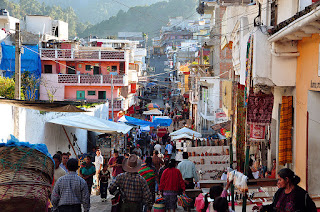 Have you been to Guatamala and/ or Chiapas, Mexico and can you give me two specific memories – one per place – that influenced you in the writing of this poem?   No, I've never been to either place, though I've been to Guadalara in Mexico and to a fishing village in the Mexican state of Sonora called Guaymas, as well as to Tijuana. (Left An outdoor market in Chichicastenango Guatemala in 2009)

Cat chitters at mockingbird.
Aerial German Shepherd
atop the car on blocks barks.

A black-haired child waves
from the studio apartment
where she lives with her Mami,
Papi, and teenage brothers.

Angels sing Spanish and Mam.
It’s cold in the North. Chili
chocolate will warm her up.
Oakland’s far from the village.

Sun hits the fence-top, makes
a sundial of the clothesline pole.
Acorns litter the lawn, squirrel
fat and can’t bury them all.

Everyone has to stay inside.
Family all together. Tamales
at Christmas. Baby Jesus smiles.

Note: Mam is a Mayan language spoken by indigenous people in Guatemala and in Chiapas, Mexico. 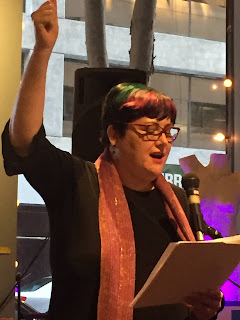 Jan Steckel is a former pediatrician who stopped practicing medicine because of chronic pain. Her poetry book The Horizontal Poet (Zeitgeist Press, 2011) won a 2012 Lambda Literary Award. Her fiction chapbook Mixing Tracks (Gertrude Press, 2009) and poetry chapbook The Underwater Hospital (Zeitgeist Press, 2006) also won awards. Her fiction and poetry have appeared in Scholastic Magazine, Yale Medicine, Bellevue Literary Review, and elsewhere. Her work was nominated three times each for the Pushcart and Sundress Best of the Net anthologies, won the Goodreads Poetry Contest twice, and won various other awards. She lives in Oakland, California. (Left Jan Steckel in January of 2018) 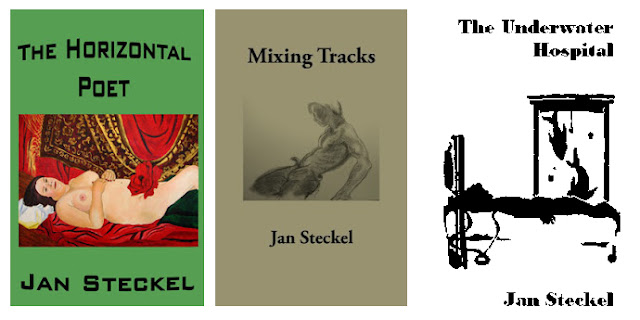 Zeitgeist Press  - The Horizontal Poet and The Underwater Hospital

BACKSTORY OF THE POEM BIBLIOGRAPHY LINKS

Posted by Chris Rice Cooper Blog at 10:37 AM