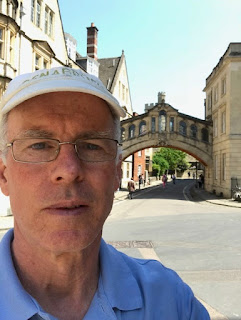 #20 Backstory of the Poem
At Last I Can Start Suffering
by Charles Rammelkamp
ramelkampjc@gmail.com

Can you go through the step-by-step process of writing this poem from the moment the idea was first conceived in your brain until final form?  I must have watched SINGIN’ IN THE RAIN (Top Right.  Fair Use.) with my children a hundred times.  So linking the quotation from Cosmo Brown (Donald O’Connor) (Bottom Right.  Fair Use) with my family was intuitive. 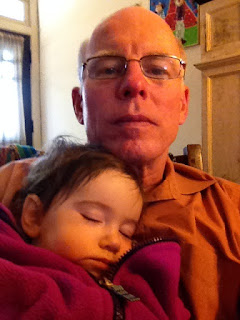 We learned that our granddaughter was going to be at regular daycare and would no longer be in our care in January of 2017, just shy of her first birthday.  I wrote a draft.  The ultimate product was published in May 2017 and underwent tweaks during the submission process. (Left:  Charles Rammelkamp with granddaughter Paloma in February of 2017.  Copyright granted by Charles Rammelkamp) 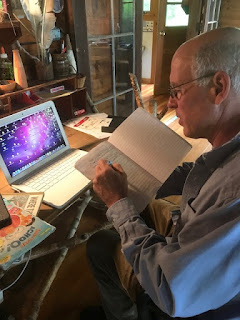 Where were you when you started to actually write the poem?  And please describe the place in great detail.  I was probably in my dining room, because that’s where the actual writing takes place, scribbling in notebook at the dining table, one of those marbled kind.  But I have no actual memory of writing the draft. 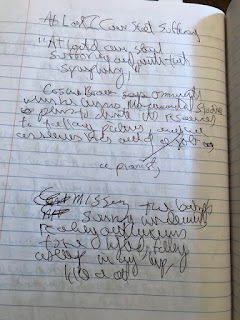 How many drafts of this poem did you write before going to the final? (And can you share a photograph of your rough drafts with pen markings on it?)  Hard to say. One scribbled and re-scribbled in a notebook, but then revised on the computer various times.  I don’t often keep old copies of discarded drafts.  They’ve been replaced. 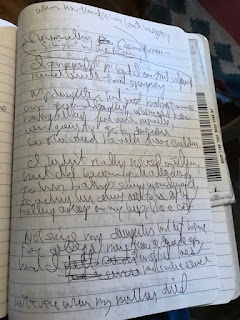 Were there any lines in any of your rough drafts of this poem that were not in the final version?  And can you share them with us?  I couldn’t say with certainty which lines, but looking at the photograph of the first draft, some comparisons can be made. 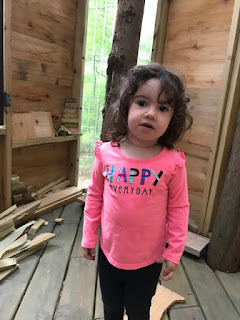 What do you want readers of this poem to take from this poem?  The pang in the heart of the passage of time.

Which part of the poem was the most emotional of you to write and why?  I wrote a series of poems on the same subject.  Some were more emotional than others.  I like this one for the lighthearted touch it provides.    (Left:  Granddaughter Paloma today.  Copyright granted by Charles Rammelkamp)

Has this poem been published before?  And if so where?  Yes, in Red River Review.
https://redriverreview.wordpress.com/category/2018/67-may/ 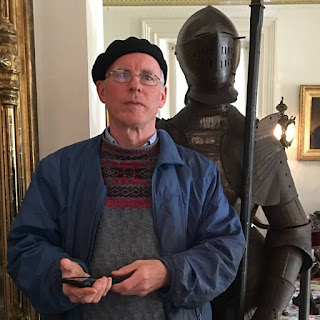 Anything you would like to add?  A lot of this is guesswork, really, the number of drafts where I was writing , since I’m usually working on various things at the same time.  But to the best of my memory, this is an honest response, and thank you for the opportunity! (Right Charles Rammelkamp's Facebook Logo Photo  Fair Use)

At Last I Can Start Suffering
by Charles Rammelkamp

“At last I can start suffering,” I joked,
channeling Cosmo Brown in Singin in the Rain,
when he thinks he’s lost his job,
“and write that symphony.”

My daughter had just broken the news:
our granddaughter, whom we’d been babysitting
for the last nine months,
was going to start attending daycare
so she could learn to be with other children.

I hadn’t really noticed until then,
but I’d become quite attached to her
baby’s sunny wonderment, her delight,
reaching her arms out to be lifted,
falling asleep on my lap, like a cat.

Not since my daughters left home for college,
more than a decade a go,
had I had such a sense of wistful loss,
not even when my mother and twin brother died.

But I’d adjusted, hadn’t I?
This, too, would become “normal”
My writing had taken a hit, it’s true,
not that I particularly minded,
but now at least I can write that symphony. 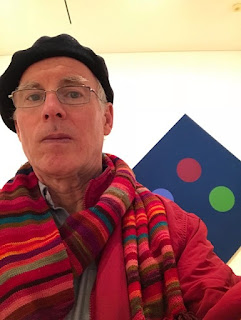 Charles Rammelkamp is Prose Editor for BrickHouse Books in Baltimore, where he lives and Reviews Editor for Adirondack Review. His most recent books include American Zeitgeist (Apprentice House) (https://www.amazon.com/American-Zeitgeist-Charles-Rammelkamp/dp/1627201513) and a chapbook, Jack Tar’s Lady Parts ( Main Street Rag Press). (https://mainstreetragbookstore.com/product/jack-tars-lady-parts/) Another poetry chapbook, Me and Sal Paradise, is forthcoming from FutureCycle Press. (Left:  Charles Rammelkamp at the Baltimore Museum of Art in February of 2017.  Copyright granted by Charles Rammelkamp) 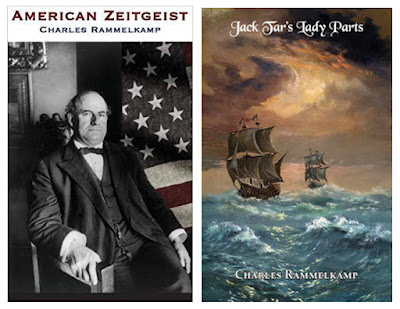