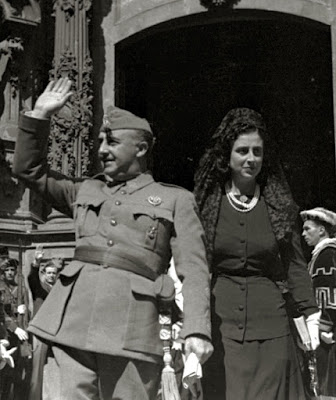 Can you go through the step-by-step process of writing this poem from the moment the idea was first conceived in your brain until final form?  I write about so many atrocities past and present. Francisco Franco was such a brutal dictator that I decided to write about him. I was thinking about the people who died and survived and the title of my manuscript came first. It is called, “I wish Francisco Franco Would Love Me.” A few poems were written and then it was put on hold because of another manuscript for well over a year. Finally, this fall through January (of 2017), I started to work on the poems. My poem, “Carmen Polo, Lady Necklaces, 2017” is one of the last poems written for the manuscript. I was doing research about Franco and started to read a little bit about her and her love for him. (Right:  Francisco Franco and Carmen Polo in San Sebastian 1941.  Attributed to Vicente Martin.  CCASA3.0UNPORTED) 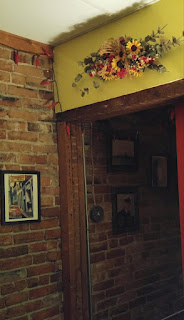 Where were you when you started to actually write the poem?  And please describe the place in great detail.  I was sitting in the kitchen at the table. It is a vibrate small kitchen. The walls are deep yellow. I have 2 huge David Hockney pictures on the wall that have every color in them especially red and orange. There are red pepper lights, flowers and things that have a Spanish flair. I love the colors red, aqua, blue and black in a kitchen. It makes me feel alive. I have seen pictures of houses in 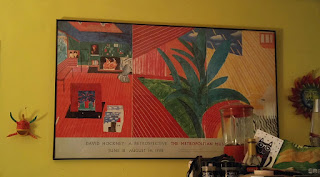 Mexico and I love the colors so I do that in my kitchen. One wall is red brick which really makes it look warm. I have a bakers rack that takes up almost one whole wall. It is filled with food, pots and pans etc… 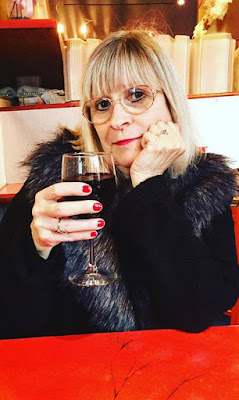 What month and year did you start writing this poem?
January, 2017. I remember it was a Saturday morning around 9:00AM

How many drafts of this poem did you write before going to the final? (And can you share a photograph of your rough drafts with pen markings on it?) The poem went through one draft and then I was happy with it. I did not bother with stanza breaks while writing it. I did this when typing the poem on the computer. (Right:  Gloria Mindock in January of 2017.  Copyright permission granted by Gloria Mindock for this CRC Blog Post Only) 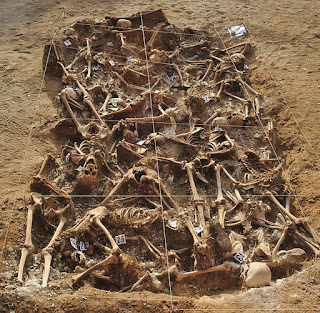 Were there any lines in any of your rough drafts of this poem that were not in the final version?  And can you share them with us? Only one. “Your body was unlucky.” It did not fit the poem. (Left:  One of many mass graves discovered and excavated in July to August of 2014.  This particular mass grave consisted of 26 Republicans who were murdered by Francisco Franco and his Francoists at the beginning of the Spanish Civil War.  Photo attributed to Mario Modesto Mata.  CCBYSA4.0)

What do you want readers of this poem to take from this poem?  The heart can be tragic.  (Below:  Rough Draft of "Carmen, Polo, Lady Necklaces, 2017" granted copyright permission by Gloria Mindock for this CRC Blog Post Only) 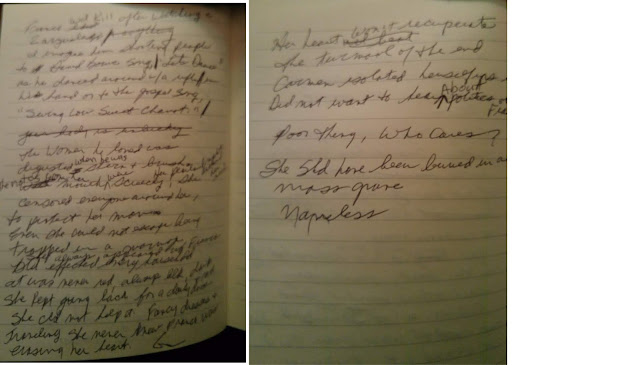 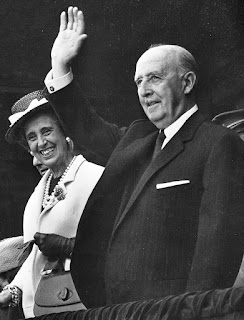 Which part of the poem was the most emotional of you to write and why? What is emotional about the poem is Carmen knew what he was doing but she still stayed with him. How could anyone stay with a killer? These lines were the most emotional to write. (Right:  Franco and Carmen on May 30, 1968.  CCBY4.0)

She liked to censor everyone around her, to protect her man.
Even she could not escape being trapped in marriage.
She always appeared with Franco.

Has this poem been published before?  And if so where?
No. I never sent this poem out for consideration to a literary journal. My poetry collection I Wish Francisco Would Love Me
is published by Nixes Mate Books (http://nixesmate.pub/i-wish-francisco-franco-would-love-me-gloria-mindock/).  This is exciting! Their books are gorgeous and they all are just wonderful and supportive. Some of the poems have been published in Constellations: A Journal of Poetry and Fiction, Ibbetson Street, Muddy River Poetry Review, Unlikely Stories, Writing in a Woman’s
Voice, and Nixes Mate Review. 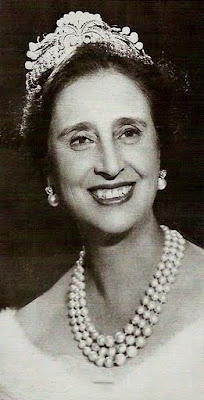 Anything you would like to add?   The title of the poetry collection is in present tense on purpose. I liked the sound of it. Simple as that. A few writers could not understand the title being in present tense. I don’t care. The poetry collection does not make fun of the horror that took place. Many poems are written in first person. The poems are really the voices of all the people. They wanted a leader who would love his country and all the people in it. (Right: Carmen Polo)

Franco would kill after watching a zarzuela
or really anything.
I imagine him shooting people to David Bowie’s song,
“Let’s Dance” as he danced around with a rifle
in his hand or to the gospel song, “Swing Low Sweet Chariot.”

The woman he loved was disgusted when he was stern and brusk.
The notes from her mouth were screechy. Her pearls bright
around her neck. She liked to censor everyone around her, to protect her man.
Even she could not escape being trapped in marriage.
She always appeared with Franco.

Her heart won’t recuperate the turmoil of the end.
Carmen isolated herself years later.
Did not want to hear about politics or Franco.

She should have been buried in a Mass grave. Nameless. 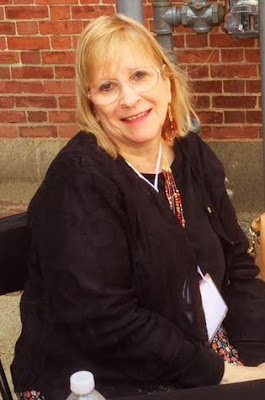 Gloria Mindock (Left: June of 2019.  Copyright permission granted by Gloria Mindock for this CRC Blog Post Only) is the founding editor of Cervená Barva Press and one of the USA editors for Levure Litteraire (France). She is the author of Whiteness of Bone (Glass Lyre Press, 2016), La Porţile Raiului (Ars Longa Press, Romania) translated into the Romanian by Flavia Cosma, Nothing Divine Here, Blood Soaked Dresses, and 3 chapbooks. Widely published in the USA and abroad, her poetry has been translated and published into the Romanian,

Croation, Serbian, Montenegrin, Spanish, Estonian, and French. Gloria was awarded the Ibbetson Street Press Lifetime Achievement Award, and was the recipient of the Allen Ginsberg Award for Community Service by the Newton Writing and Publishing Center.  Gloria recently was published in Gargoyle, Constellations: A Journal of Poetry and Fiction, Muddy River Poetry Review, Unlikely Stories and Nixes Mate Review and anthology. She is currently the Poet Laureate in Somerville, MA.  She is also Executive Director of Read American Read.  Her newest poetry collection is I Wish Francesco Franco Would Love Me published by Nixes Mate Books, 2018