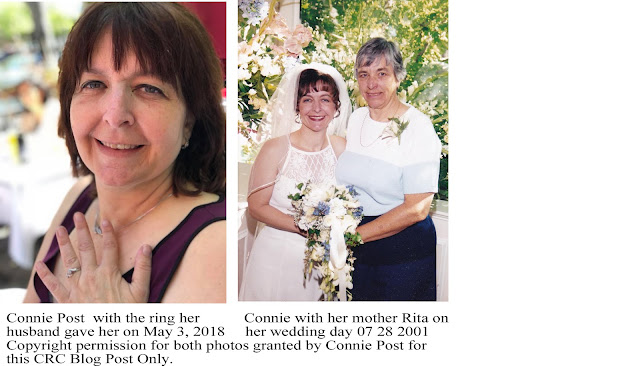 #28 Backstory of the Poem
“Two Deaths”
by Connie Post
connie@poetrypost.com 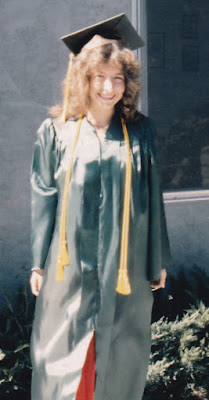 Can you go through the step-by-step process of writing this poem from the moment the idea was first conceived in your brain until final form?  The idea came to me when my father died. He was my abuser.   Less than thirty days prior, my true mother died suddenly at age 80. By that I mean, not my biological mother. For some background, when I was 18 (Right: Copyright permission for this photo granted by Connie Post for this CRC Blog Post Only),  I left my home into the arms of my then boyfriend (who became my first husband). I left home for good. This woman took me in when I had nowhere to go.  Even though my marriage ended many years later, she and I remained close until the day she died. She was the only mother I’ve ever known since age 18. 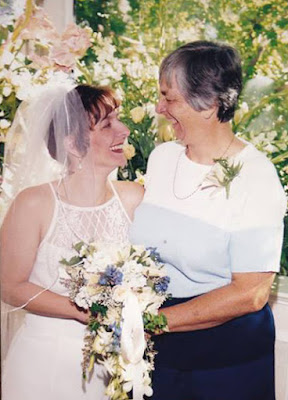 My biological mother was very abusive and stood by my father.  I was stunned into a peculiar stillness when my father died. Not that I was surprised he died, but at waterfall of negative emotions that were flowing out (even after years of therapy) and more sadness than I knew a person could have. (Left: Connie and her mother Rita on her wedding day.  Copyright permission granted by Connie Post for this CRC Blog Post Only) 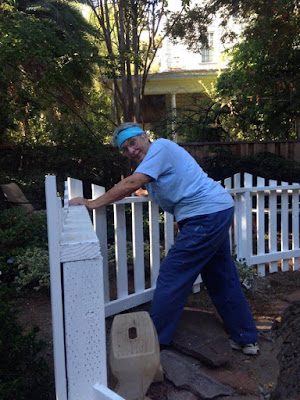 Within about three days of my dad’s death, I felt completely lost. The only true mother I’d ever known was gone, my abuser father was gone, and the world felt very different to me. Suddenly it struck me that I ran from him to her and those two book ends in my life were gone. I realized I had to find a new way to be in the world and how I perceived it. I lost both a mother cocooning security and my terror all in one month. (Right:  Rita in August of 2016. Copyright permission granted by Connie Post for this CRC Blog Post Only) 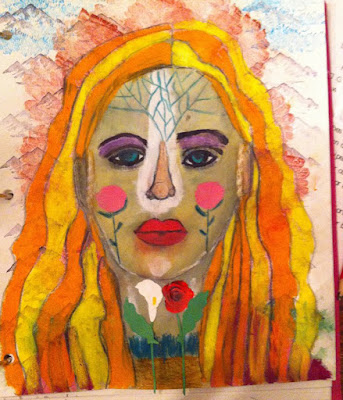 When I write poems, the lines or metaphor always pop into my head first then I write from that place. It was one of those mid-day occurrences when I realize the continuum of loss.  As I started to write ( I wrote the first stanza first) , the image of a mountain and geology came to me so I succumbed to that metaphor to see where it took me. I didn’t add the “broken” part until the end. I didn’t see the mountain as broken until I wrote most of the poem. (Left: Artwork and copyright by Christal Ann Rice Cooper) 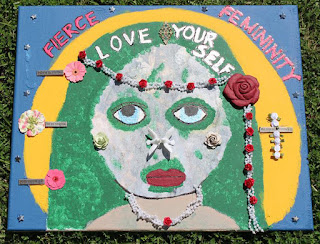 Since I can at times feel very lonely, I imagined someone starting out on their own in the wilderness.  I picked and pulled images about camping and being lost and wove them in where appropriate.  I used the “heaviest” gear to invoke the idea of leaving the hardest memories behind to get to a safer place.  I had other stanzas after the “the next foothold” (I don’t remember what they were) but decided I wanted to leave the poem dangling, as a foot, to imply an open idea to the resolution of this kind of loss. (Right:  Artwork and copyright by Christal Ann Rice Cooper) 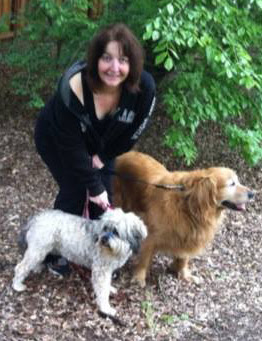 Where were you when you started to actually write the poem?  And please describe the place in great detail.  I wrote this poem in my office.  This is the place I write most of my poems.  I write mostly on my desk top.  I have a large wooden desk in front of a large window.  (Left:  Connie with her two dogs.  Copyright permission granted by Connie Post for this CRC Blog Post Only) 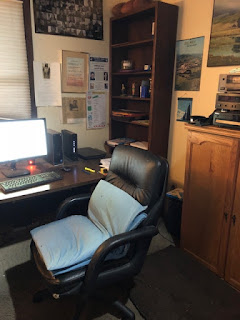 In mid morning, I pull the blind down because the sun glare is too strong on my computer screen.  I have two dogs who sit next to me in the office (Right: Copyright permission granted by Connie Post for this CRC Blog Post Only).  The sounds of their panting makes a peaceful space for me.  A times (depending on my mood) I put on piano music.  It helps to open up a specific creative space in my brain. 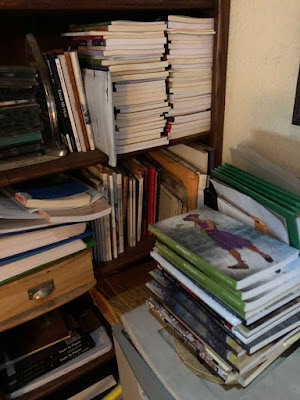 There is a carpet in the room that has too much dog hair on it.  My husband shares a desk on the other wall.  His desk is smaller and has papers scattered about.  To the right of my desk is a tall bookshelf and then  a cabinet with old DVDs and videos in it.  (I won’t get ride of the VHS videos which is a point of contention in our house).  (Left:  Copyright permission granted by Connie Post for this CRC Blog Post Only) 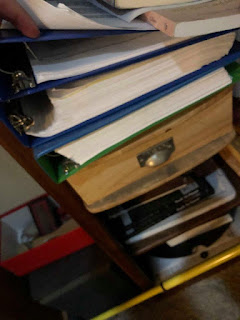 The second bookshelf has a stack of CD’s and then two shelves of all the journals that I’ve been published in.  Below that, binders and files of poems I’ve written.  The poems are all in alphabetical order.  The office has a bulletin  board of writing quotes and pictures of family and photos of writing events.  There are also two dog pillows and various golf pictures of my husband’s. (Right:  Copyright permission granted by Connie Post for this CRC Blog Post only) 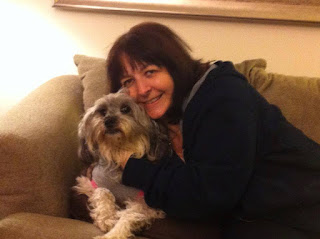 What month and year did you start writing this poem?  I wrote this poem in late may. (Connie with her dog in 2017.  Copyright permission granted by Connie Post for this CRC Blog Post Only) 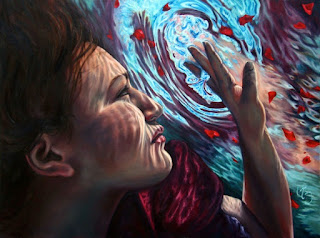 How many drafts of this poem did you write before going to the final? (And can you share a photograph of your rough drafts with pen markings on it?)  I wrote only 2 drafts.  I most often edit on line and don’t usually keep previous drafts.  It muddies the waters for me. (Right: Woman Submerged attributed and copyright permission granted by Erika Craig for this CRC Blog Post Only.  http://erikacraig.com) 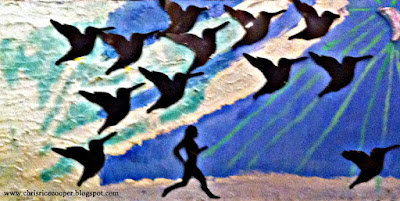 What do you want readers of this poem to take from this poem?  That we can be lost and saved within the most difficult times of our lives.  That we can wander and feel that we are dangling but eventually we can find a way out.  That death is inevitable.  The death of one person is connected to the death of others in inexplicable ways.   (Left:  Artwork and copyright by Christal Ann Rice Cooper) 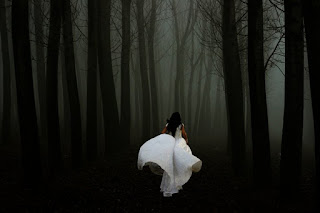 Which part of the poem was the most emotional of you to write and why?  The most emotional part was the first line.  It was hard for me to believe that two people that represented such extreme experiences in my life died within the same month.  It was an avalanche of mixed emotions to cope with.

Has this poem been published before?  And if so where?  This poem was published in January 2018 Mocking Heart Review. 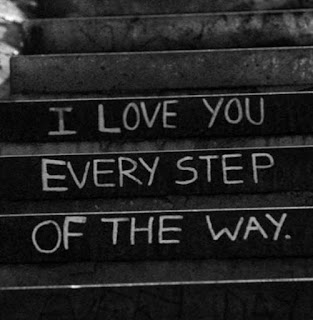 Anything you would like to add?  If I didn’t have poetry during times of loss and confusion, I am not sure how I would find solace of meaning.

you spend your time
examining the geology
inside a broken mountain

you write “help”
across the legible places
in the sheered stone

you repel
against the flat wall
of yourself

you travel light,
drop the heaviest gear
down the steep cliff

and hope
you remember
how to find
the next foothold 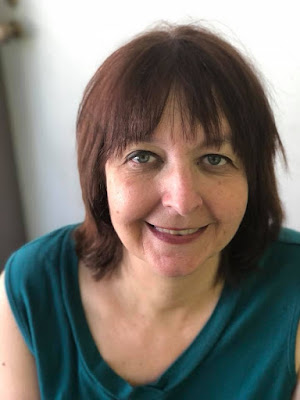 Connie Post served as Poet Laureate of Livermore, California  (2005 to 2009). Her work has appeared dozens of journals, including  Calyx, Comstock Review,Cold Mountain Review  Slipstream, Spillway Spoon River Poetry Review, Valparaiso Poetry Review and Verse Daily. She has written seven books of poetry.   (Left:  Connie in May of 2018.  Copyright permission granted by Connie Post for this CRC Blog Post Only) 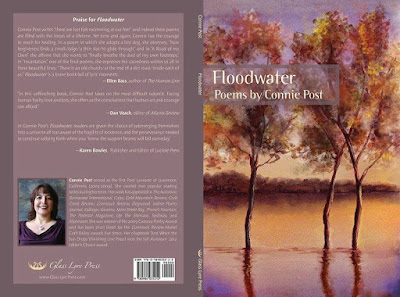 Her first full length Book “Floodwater” (Glass Lyre Press 2014) won the Lyrebird Award.  Her other awards include the 2017 Prick of the Spindle Poetry competition, the  Caesura Award and the 2016 Crab Creek Poetry Award.
She is an advocate for autism and has an adult son whom she has written several books about.

Posted by Chris Rice Cooper Blog at 8:39 AM