#29 Backstory of the Poem "Faces in a Crowd" by Mary Harwell Sayler. . 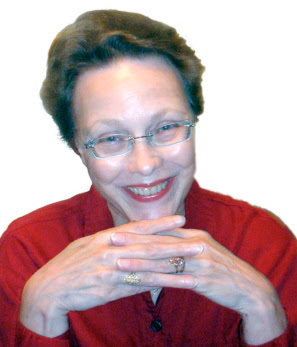 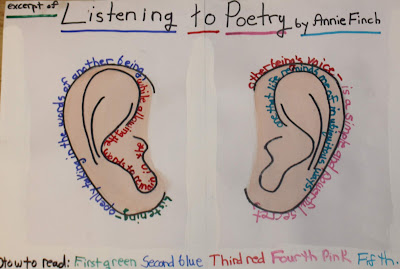 Can you go through the step-by-step process of writing this poem from the moment the idea was first conceived in your brain until final form?  As happens with almost every poem I write, an opening line suddenly came to me, and as soon as I wrote it down, other lines followed. It's often a mysterious process for me since I typically write from a place of listening and heeding, rather than thinking. However, the poems that follow usually have a way of putting into the forefront what I'd been mulling over, subconsciously. (Above and Below: Copyright permission and artwork attributed to Christal Ann Rice Cooper for this CRC Blog Post Only) 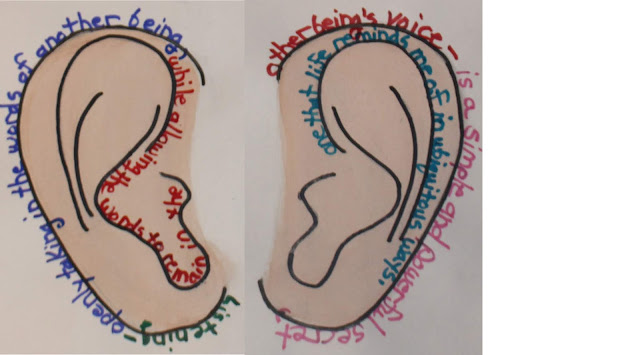 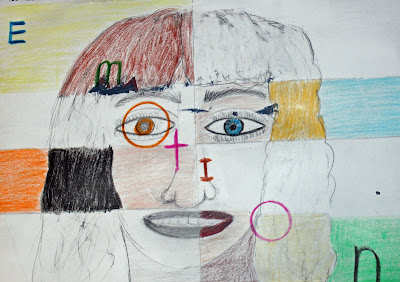 For example, I'd been noticing, in the media and elsewhere, how people frequently seem to be looking for ways to read the future without bothering to pay attention to the present! Then, when they do notice someone right in front of them, they might just focus on the person's flaws and failures with no insight, empathy, or interest in the symptoms shown. In people-watching and observing men, for instance, I find that fear, worry, frustration, and sadness generally register on their faces as one emotion - anger, whereas women more readily express a greater range. Whether that's true or not, my poem seemed to think so as all of the above converged into the poem, "Faces in a Crowd." (Above Right:  Copyright permission and artwork attributed to Christal Ann Rice Cooper for this CRC Blog Post Only) 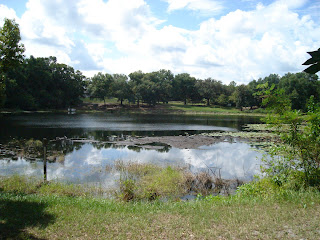 Where were you when you started to actually write the poem?  And please describe the place in detail.  For this particular poem, I was at my desktop computer. Quite often, though, my poems begin in one of two places: in bed immediately on waking or on our deck, overlooking woods and a small lake active with wildlife. (Left: Copyright permission granted by Mary Harwell Sayler for this CRC Blog Post Only) 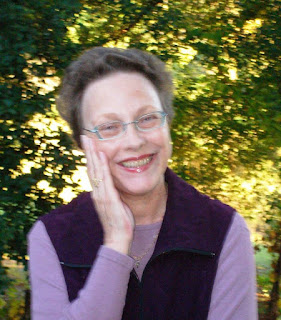 What month and year did you start writing this poem?  The poem began in February, 2014, and once its flow had ceased, I let the poem sit and went on to other writing projects. When I returned to it, I did a little tweaking then revised it a couple of years later. (Right: Mary Harwell Sayler in October 2014.  Copyright permission granted by Mary Harwell Sayler for this CRC Blog Post Only) 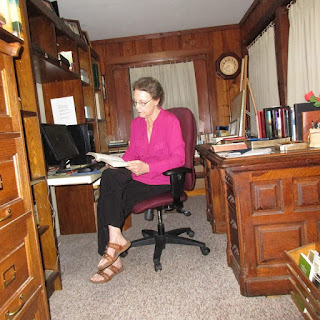 How many drafts of this poem did you write before going to the final?   That's a hard question to answer, Christal, as I often spend hours playing with single words or phrases in the early instances of a poem. Sometimes I'm looking for a word that's more precise. Other times I'm listening to the play of assonance or consonance then trying to find an apt synonym that adds sound echoes to the poem. (Left:  Mary Harwell Sayler in her office in September 2016.  Attributed to her grandson.  Copyright permission granted by Mary Harwell Sayler for this CRC Blog Post Only) 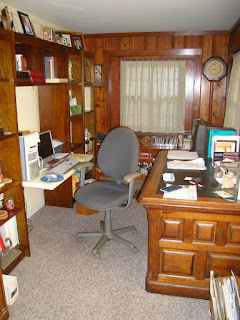 I seldom keep track of those revisions or ones when I play around with line breaks that might better emphasize certain words or sounds, but those are the concerns that set me in a revising mode. Also, if a poem is too long, I'll almost always find ways to tighten and shorten the lines. Beyond those types of changes though, I rarely make major revisions that I like better than the original. Instead, I'll give each poem my full attention when it first arrives, and if everything clicks, I'll send it off to a journal or e-zine. If not, I'll come back to it months - maybe years later - and "suddenly" know what to do. (Right Mary Harwell Sayler's office.  Copyright permission granted by Mary Harwell Sayler for this CRC Blog Post Only) 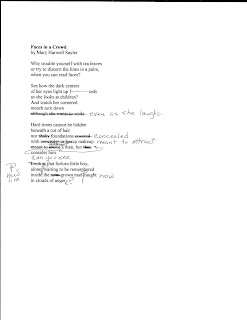 Were there any lines in any of your rough drafts of this poem that were not in the final version?  And can you share them with us?  Sure. I usually write, tweak, and revise in my Word file now, rather than pencil and paper, but, for you, I printed out the original version of "Faces in a Crowd" and showed the changes made for the final draft. That said, the "original" might have had other words substituted, added, or omitted, but the basic poem is as shown. (Left:  Rough draft of "Faces in a Crowd."  Copyright permission granted by Mary Harwell Sayler for this CRC Blog Post Only) 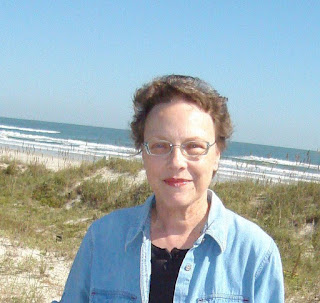 What do you want readers of this poem to take from this poem?  I'd love to see people slow down, pay attention to one another, and give each other the benefit of the doubt. Who knows what joys and miseries someone else has had to bear? We're all in this life together, and I pray we begin to help and encourage one another instead of the present lamentable habit of tearing each other down. (Right:  Mary Harwell Sayler in October of 2010.  Copyright permission granted by Mary Harwell Sayler for this CRC Blog Post Only) 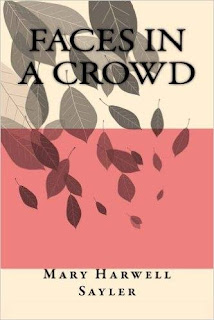 Has this poem been published before?  And if so where?
Yes. When I realized I had enough "people" poems for a book, "Faces in a Crowd" became the title poem for a book published in 2016. 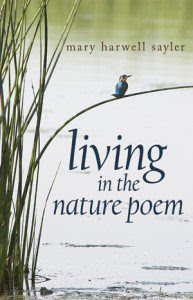 What do you hope to accomplish with your poetry?  Actually, I didn't think much about this for many years. As a freelance and assignment writer for most of my adult life, I wrote a number of books in all genres with a specific theme and purpose for each. I wrote all sorts of articles, children's stories, and devotionals, too, while my poems sat around in a file that kept expanding. Then, it occurred to me that most of my poems had developed some kind of theme or purpose on their own! So I went through my Word file and typed one or more labels for each poem, identifying them as "nature," "faith," "people," "social comment," "humor," "children's poem," etc.  Not long after that, I placed some poems with an e-zine and learned the publisher was also interested in books of nature-oriented poems. So I did a "nature" word search and found more than enough poems for a book entitled Living in the Nature Poem, which Hiraeth Press published in 2012 but recently went out of print. 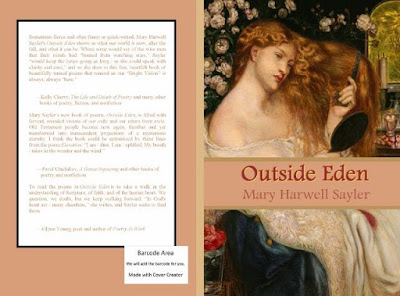 The idea for that book wasn't just the nature theme but also the hope of having readers gain or increase their love for nature. Using a similar process of search-and-gather, I collected my Bible-based people poems into the book Outside Eden to show we all live in essentially the same place - outside paradise, trying to get back in. In 2014, Kelsay Books published that collection and also my little book of nature poems for children, Beach Songs & Wood Chimes. Then, for about a year, I felt urged to practice praising God for everything (yes, everything!), and in 2017, Cladach Publishing released my praise poems and contemporary psalms (including laments) in the book PRAISE! 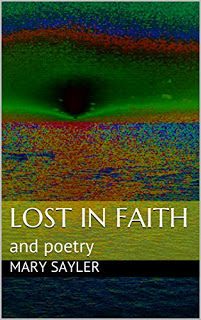 In between, I self-published Faces in a Crowd with my remaining "people" poems, many of which had first appeared in poetry journals, to show the common and uncommon experiences uniting us. And, in 2017, I self-published Lost in Faith with poems that realistically address the struggles and doubts we all encounter, but with the strong purpose of letting readers know: God cares! 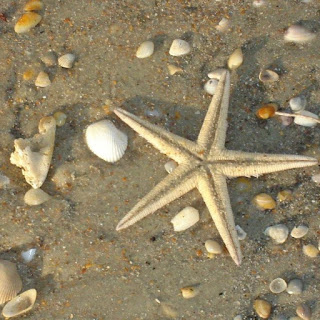 I maintain a website in my name (http://marysayler.com) which includes an email form, my mailing address, and hotlinks to my books, online writings, and social media profiles. In addition, my website lists numerous resources with hotlinks to help other poets and writers. (Left:  Web Logo Photo attributed and copyright permission granted by Mary Harwell Sayler for this CRC Blog Post Only) 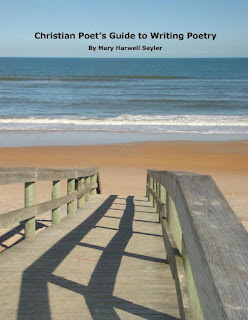 What suggestions do you have for other poets and writers?  Read, read in your favorite writing genre!
If you're serious about writing well-written, publishable poems, study art forms and techniques that work well, for instance, as shown in my e-books, Christian Poet's Guide to Writing Poetry: in free verse and traditional forms and also the A to Z guide, Poetry Dictionary For Children and For Fun. 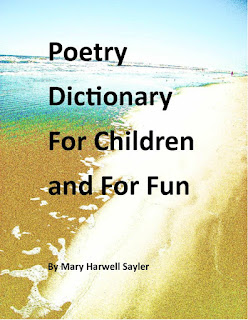 Read aloud every poem and every revision.

Be honest with yourself as you consider each poem's clarity, freshness, and readability.

Give your poems the time they desire to be the best they can be. They're worth it!

*Below: artwork and copyright permission granted by Christal Ann Rice Cooper for this CRC Blog Post Only 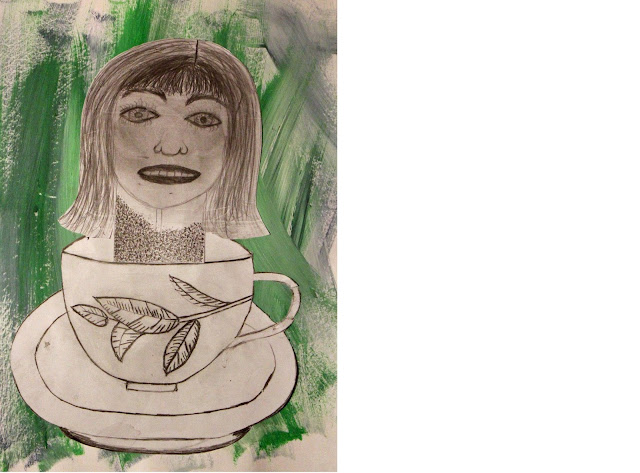 Faces in a Crowd

Why trouble yourself with tea leaves
or try to discern the lines in a palm
when you can read faces?

See how the dark centers
of her eyes light up only
as she looks at children?
And watch her cornered
mouth turn down
even as she laughs.

Hard times cannot be hidden
beneath a cut of hair
nor foundations concealed
with makeup meant to attract
a man, but consider him:

Can you see
that forlorn little boy,
alone,
waiting to be remembered
inside the grown man,
caught now
in clouds of anger?

Posted by Chris Rice Cooper Blog at 10:25 AM