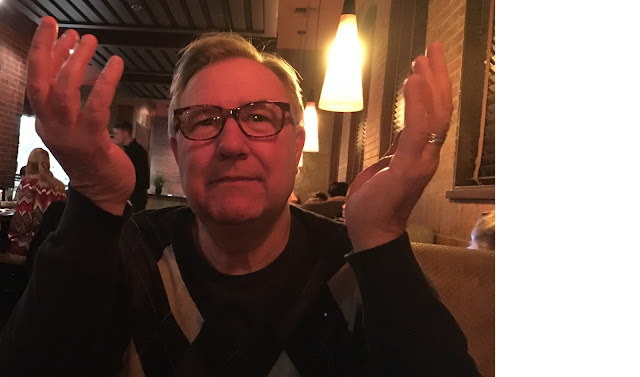 #31 Backstory of the Poem
“After We Drove”
by Mark Lee Webb
mark@markleewebb.com 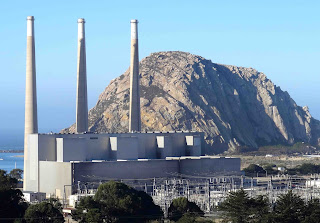 Can you go through the step-by-step process of writing this poem from the moment the idea was first conceived in your brain until final form?  The genesis of this poem was a bad vacation, if there is any such thing as a vacation being “bad”. It’s just that my wife and I were having teeny-tiny little tiffs here and there as we traveled around California during the summer of 2015. We started in LA and were working our way up the coast. I’m from the LA area I grew up in Malibu Canyon, but it’s all changed so much. It’s concrete from the beach all the way to the San Gabriel Mountains now. It can wear you out. 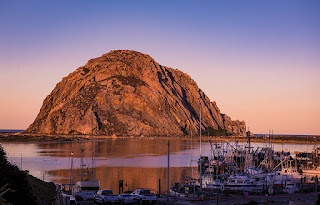 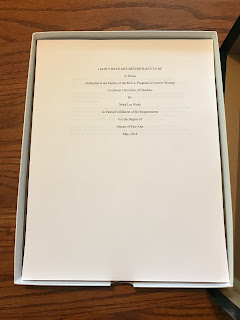 I get this idea about how California itself is a bit of a mirage and not really like the postcards, and along with the differences between my wife and I that led to a bit of bickering (she’s a risk taker/ I worry about everything: she wants to drive up to Hearst Castle via Highway 1/ I’m afraid of heights) I came up with the idea for this poem. I actually continued to write other poems on this idea, and it became the basis for my MFA thesis (Queens University of Charlotte 2018) (Right:  Copyright permission granted by Mark Lee Webb for this CRC Blog Post only). I wrote most of the lines in this poem rather quickly, and it seemed in its best form using couplets, so I stayed with that form and never changed it. 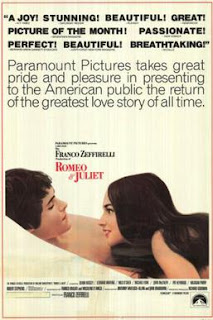 But I could not come up with an ending. How to get Morro Bay into the ending of the poem and make it a surprising ending. No clichés allowed. Well, it just so happened that a few weeks later we’re watching a production of Romeo and Juliet on DVD  (Left) (we decided to dive into Shakespeare that fall and watch one play a week) and there is this line in Act II Scene I where Romeo’s friends are making fun of him, and Mercutio says, “Till she had laid it and conjured it down.” I thought that line remarkable, so I sorta stole it and morphed it into “lay low, conjure me down” But I still needed some way to get to that end; I now had what I thought was a great ending, but I needed a bridge to get there. 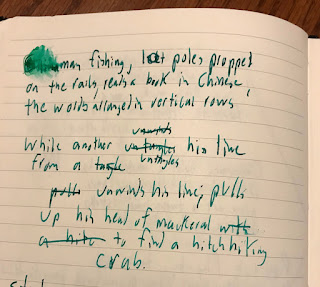 I went back to my journal (Right:  Copyright permission granted by Mark Lee Webb for this CRC Blog Post Only) and found some notes I took in LA while I was walking on the Huntington Beach Pier about a fisherman jigging for crabs with the head of a mackerel and how he pulled up a large crab clinging to the mackerel’s eye, and that’s how I got the lines, “You pick a mackerel’s eye/from the claw of a crab and make-believe/it’s a pearl.” Now I had my bridge from beginning and middle of poem to the end, and I had an ending thanks to Shakespeare. I included a picture of that page of the journal so you can see what I wrote that day in July on the pier. 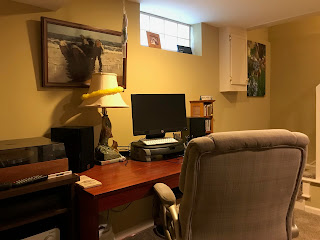 Where were you when you started to actually write the poem? And please describe the place in great detail.  I was back home in my basement office. My officeis a 10’x10’ finished room in our basement.  (Left:  Copyright permission granted by Mark Lee Webb for this CRC Blog Post Only) My writing desk is large and old, with plenty of scars. It takes up most of the space in my office. I have a nice stereo down there with a vintage turntable that spins vinyl jazz albums. There is a small window in the corner of my office just over my desk—way up high almost to the ceiling—that drizzles the room with light in the mornings. I also have several bookcases packed with books—virtually all are books of poetry. A lot of chapbooks. I love chapbooks: I delight in the intimacy of reading a small portfolio of a poet’s work. 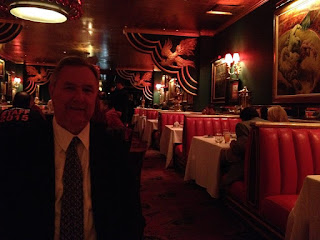 What month and year did you start writing this poem?  Around August of 2015, about a month after we returned from our vacation in California. (Right:  Mark Lee Webb at the Russian Tea Room in October of 2015.  Copyright permission granted by Mark Lee Webb for this CRC Blog Post Only)

How many drafts of this poem did you write before going to the final? (And can you share a photograph of your rough drafts with pen markings on it?)   Not many. I did workshop this poem with a wonderful poetry group in Columbus, Ohio that I belong to: The Pudding House Innovative Writer’s Program.( https://www.facebook.com/Pudding-Magazine-206203566056760/) I submitted it to Ninth Letter (https://www.facebook.com/ninthletter/?tn-str=k*F) in November of 2015, so I didn’t spend a lot of time with it. It was one of those poems that worked well from the beginning and didn’t require many revisions. 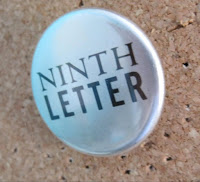 Were there any lines in any of your rough drafts of this poem that were not in the final version? And can you share them with us?   No, none that I can think of. What do you want readers of this poem to take from this poem?   Don’t sweat the small stuff. Don’t worry about things out of your control. Don’t let the little petty things in life get in the way of relationships with your loved one. Believe in magic. 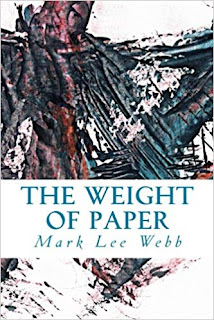 Which part of the poem was the most emotional for you to write, and why?   My wife is a dreamer. I worry about everything. I’m afraid of heights. She did all the driving across SF Bay bridges and on the coast around Mendocino. It was hard to catalog differences between the two characters in the poem because I was really cataloging the differences between my wife and I. That was tough to do. 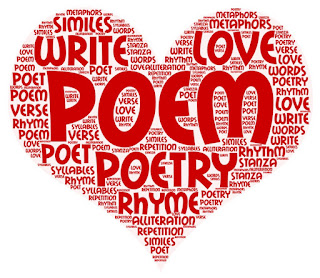 Anything you would like to add?   Too many people are afraid to write poetry: “It’s too complicated. It’s too deep. I can’t understand it. I can’t write it”. I encourage them to write 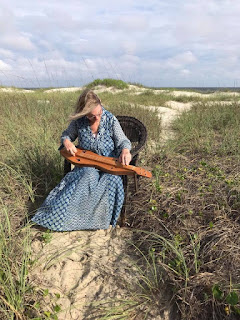 about what happened today, or last week. Don’t write about the universe. Write about the date you had last night. Write about that chair in your kitchen that always wobbles. Don’t worry about the form, or artificial rules. Write anything—just don’t be afraid to write. 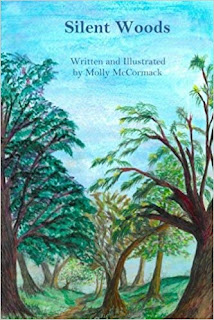 When I lead children in writing poetry I give them no rules other than write about what’s in their rooms or closets or behind their back fences. They just blossom and can’t stop writing poems. Free from rules and constraints, they feel free to, well, just write. And they craft the most marvelous poems. That what this poem has in it: a 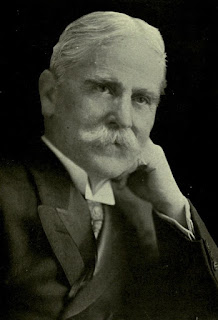 catalogue of what I saw and experienced in California. A mackerel’s eye. Little ponds on little ranches baking dry in the summer heat. Santa Ana winds. Brush fires. Shake roofs. Ojai, and Morro Bay. My wife, Molly McCormack (Above Left) (http://mollymccormack.com/index.html), wrote a terrific song, “Silent Woods” (as well as a short illustrated children’s book with the same title, “Silent Woods”), (https://www.amazon.com/Silent-Woods-Molly-McCormack/dp/1494487845/ref=sr_1_6?s=books&ie=UTF8&qid=1537819125&sr=1-6) about not being afraid to use your talents. She borrowed a line from Henry van Dyke: (Above Left)"Use what talent you possess:  the woods would be very silent if no birds sang except those that sang best."  I think that says it all.

from Ojai to the foot of Adobe Hill,
found the Chumash Kohsho near a grove

of sycamores, you came home and said
everything I told you was a lie.

adorned with glass beads. Keep a cache
of polished charmstones for casting spells.

But California summers, all the hills crinkling
to ginger. Little ponds on little ranches

brush and scrub rolling down the arroyos.
I worry. Over sidewalk stains from walnut

along the Palisades. You pick a mackerel’s eye
from the claw of a crab and make-believe

it’s a pearl. Swim with speckled sea snakes
in Morro Bay. Lay low, conjure me down. 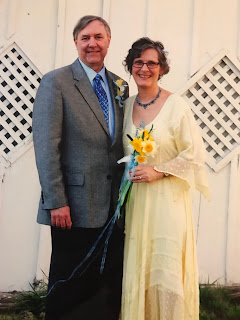 I was born in Louisville, KY, but we moved to California in the late 60’s. Growing up as a teenager around SoCal beaches, I know where a skeg is on a surfboard, and how to get from Malibu to Westwood via Mulholland.  I am happily married to the talented musician Molly McCormack (Left:  Webb and McCormack on their wedding day.  Copyright permission granted by Mark Lee Webb for this CRC Blog Post Only) and we each have two grown sons from previous marriages.  I received my MFA from Queens University of Charlotte.  I've had two chapbooks published:  WHATEVERITS (Finishing Line Press, 2014) and The Weight of Paper (ELJ Publicans, 2014).  My poems have appeared in many literary journals, including Ninth Letter, The Louisville Review, Aeolian Harp, Soundings Review, Glassworks, Chiron Review, The Baltimore Review, RipRap, and Star 82 Review.