#80 Inside the Emotion of Fiction: "Dayworld: A Hole In Wednesday" by Danny Adams 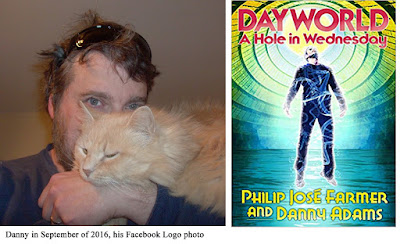 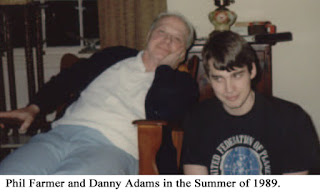 Name of fiction work? And were there other names you considered that you would like to share with us? Dayworld: A Hole in Wednesday. There were no other names I seriously considered; this was a work started (but never finished) by someone else – my great-uncle, the science fiction author Philip José Farmer – and he came up with the name when he wrote the opening chapters several decades ago. I liked the name too, but even if I hadn’t, I still almost certainly wouldn’t have changed it.

Has this been published? If yes, what publisher and what publication date? Meteor House (www.meteorhousepress.com) in the summer of 2016.

What is the date you began writing this piece of fiction and the date when you completely finished the piece of fiction? I started writing it in August of 2015, giving myself a deadline of Christmas to finish it. I just barely made it, finishing up, if I remember right, two days before Christmas. As for when Phil Farmer wrote his portion, nobody is exactly sure. It was likely either in the late 1970s or early 1980s. 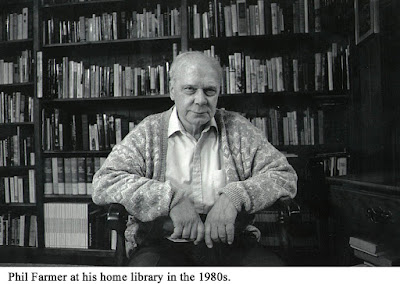 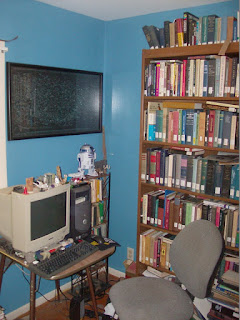 Where did you do most of your writing for this fiction work? And please describe in detail. I have a small writing room that was originally meant to be, I think, a nursery. It’s tiny and with a small closet, but cozy for me, not many distractions (except bookshelves lining the walls), and a view of a forest stretching out from my backyard (which admittedly can also be distracting). The tops of the computer and monitor are filled with trinkets, knick-knacks, souvenirs, and other sentimental objects that have at least some connection, if thin, with my writing, writing life, or other creative pursuits from over the years, like a window quartz (for occasional staring into if I’m stuck on some plot point), a small NCC-1701 USS Enterprise, and a tiny warning traffic cone that says CHAOS AHEAD. 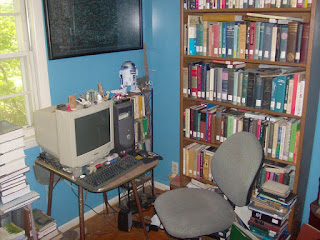 (The computer, a desktop that’s about a dozen years old, is bulky, and the 20-year-old monitor even moreso, so there’s plenty of room for stuff on top of them.) There are also a couple of small display shelves with more small items ranging from geodes and artifacts I’ve found to a metal model of the Red Baron’s Fokker Dr.I triplane. (The plane in part is another nod to Phil Farmer.) At the time of year I’m writing this (mid-summer), I’ll also have a box fan blowing on me. 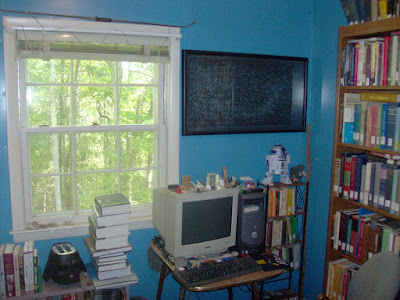 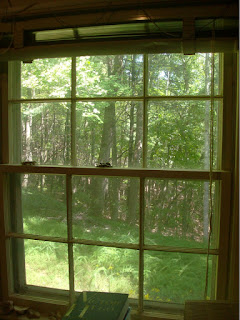 What were your writing habits while writing this work- did you drink something as you wrote, listen to music, write in pen and paper, directly on laptop; specific time of day? My habits then and now are pretty sparse when I’m sitting down for the first draft. Pre-writing, editing later, coming up with story ideas – those are all over the map. I can do those anywhere (including the noisy cafeteria at the college where I work), while listening to music, having a TV on in the background, or whatever else. But when I sit down to write new material I like to be as quiet and shut away as possible. (I even somehow manage to ignore my cats scratching on the door.) I might have a (non-alcoholic) drink nearby. Otherwise, that’s all. I typically write from late morning to early afternoon; this is partly due to my work schedule, but conveniently it’s also when I seem to get my best work done. 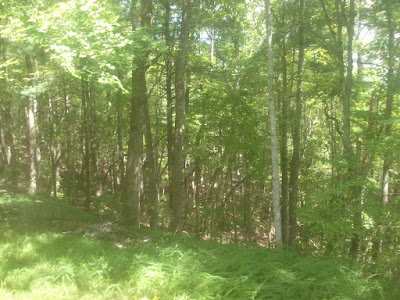 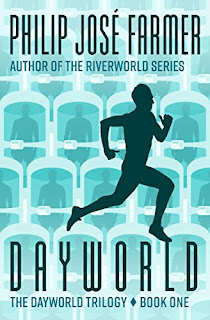 What is the summary of this specific fiction work? This is a prequel to Phil Farmer’s famous Dayworld trilogy, in which overpopulation and other factors became so wretched that you’re only allowed to live one day out of seven – the rest of the time you’re in suspended animation while other people live in your apartment, have your job (even if you’re the president), and so on. The worst crime is “Daybreaking” – illegally living across all seven days of the week. 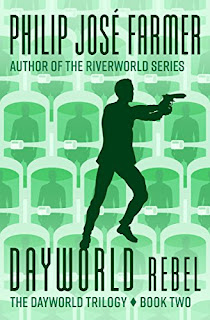 Jerry Carson is just an ordinary guy who doesn’t want to rock any boats. But when his wife miscarries, and he realizes many other women are miscarrying in this age of supposed medical miracles, he starts an investigation that ends up forcing him to become a Daybreaker. In doing so he comes into contact with a secret group composed of Daybreakers who are working to bring the whole system crashing down – and set up a new only-the-strongest-survive society from the ruins. 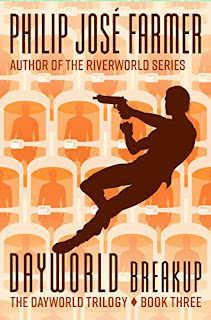 “Stoners”, by the way, are the coffin-like containers that people use to stay in suspended animation for six out of seven days.

Can you give the reader just enough information for them to understand what is going on in the excerpt?
Jerry has broken through the “hole in Wednesday”, his Day, into Thursday, but his investigation and explorations aroused suspicion and he was captured by a doctor and would-be dictator named Marks. When the scene picks up he has escaped and is on the run just barely ahead of Marks and the authorities. He is guided into and through an underground labyrinth by an anonymous voice he has been hearing through an implant in his skull, which claims to be a member of a anti-government movement called the “Reductionists” and which has promised to help him figure out the truth of not just his situation, but the Dayworld at large. 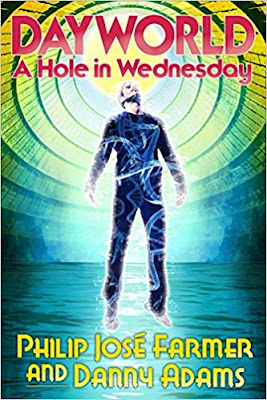 Please include the excerpt and include page numbers as reference. The excerpt can be as short or as long as you prefer. Pages 143-146 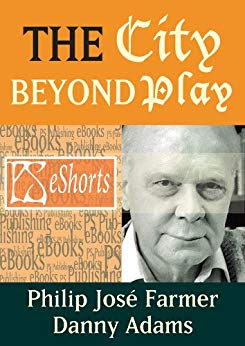 Why is this excerpt so emotional for you? And can you describe your own emotional experience of writing this specific excerpt? This passage marked a transition in a couple of ways. For the character of Jerry Carson, it was a turning point, and a point of no return. Once he crossed this last threshold there was definitely no turning back. He could never try to sneak back to Wednesday, live the normal and simple life he had before.
For me, this was close to where Phil Farmer stopped writing and I picked up his work. Even having finished one of his books before, I was still nervous about the whole process. For that previous book - The City Beyond Play – he had been able to guide me through the process to an extent. He passed away some years before Hole in Wednesday, and at the point of this excerpt, I was close to where I left off and was committing to writing a story that was as much my creation as his without that guidance. He was a master (and literally a science fiction Grand Master); I was still a novice by comparison. 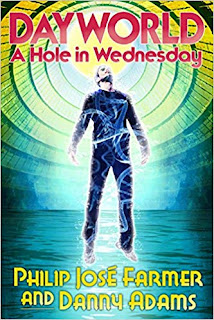 So there was a lot of anxiety at this point both personally and for where the story went from Jerry’s flight - but also a lot of excitement. I wanted to write a book was worthy of his series, but I was also thrilled to be able to play in his universe, one I’d been a fan of for years. Even after working on the book for a little while by this point, reaching this scene and going beyond it really felt like plunging into that universe for the first time.

Were there any deletions from this excerpt that you can share with us? And can you please include a photo of your marked up rough drafts of this excerpt. I didn’t have very many deletions, honestly – which for me is extremely unusual. Typically my first drafts are hugely overwritten, and I end up cutting out big swaths. This time, though, in imitating Phil Farmer’s much more concise voice, my pendulum swung far to the other direction. At numerous requests from my editors, I had to get used to adding material rather than subtracting. 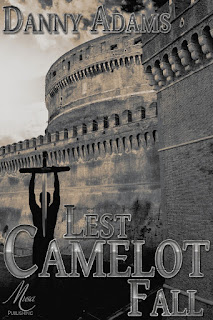 Other works you have published? I also helped finish the last of Phil Farmer’s books that were published while he was still alive, a short novel titled The City Beyond Play, from PS Publishing. For a nice while I had an early medieval / post-Arthurian historical novel out titled Lest Camelot Fall, but sad to say it disappeared when its publisher (Musa) went under in 2015. I’ve toyed with the idea of self-publishing it, though haven’t done so yet. I’ve also published a number of short stories and poems (mostly science fiction and fantasy), a few essays (including one on Harry Potter’s parallels with King Arthur for Salem Press’ Critical Insights series), and lots of anonymous speculative fiction book reviews for Publishers Weekly. 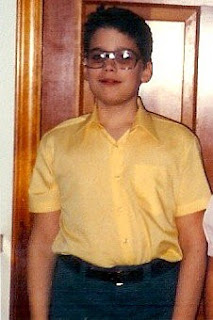 Anything you would like to add? Speaking of emotion…my uncle was the man who got me seriously interested in writing when I was 12 years old (right), something that latched on then and has never let go, and it was a longtime dream of mine to collaborate with him. It took years – when The City Beyond Play originally came out in 2007, I was 36 and he was 89. There are a lot of reasons why it might not have happened, and almost didn’t. But when he passed away just two years later I was overwhelmed with gratitude that I’d been able to do it. I tried imagining how I might have felt if I hadn’t or hadn’t been able to, and I didn’t like the feeling coming with that imagining. So I would say to anyone reading this that if you have a creative project of your heart that you want to do but for some reason you haven’t done it yet, and there is any possibility that you can – get going! 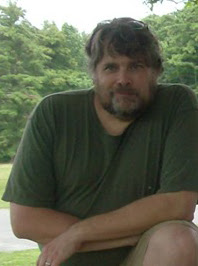 Danny Adams (Left in July of 2019) was born in the Blue Ridge Mountains of southwest Virginia in 1970. He is the co-author, with Philip José Farmer, of the novels The City Beyond Play and Dayworld: A Hole in Wednesday. Some of his shorter work has appeared in Abyss & Apex, Appalachian Heritage, Asimov’s Science Fiction, Critical Insights: The Harry Potter Series, Ideomancer, the Journal of the American Chestnut Foundation, Ideomancer, Mythic Delirium, Not One of Us, Space & Time, Star*Line, and Strange Horizons. He is a reference librarian assistant at Ferrum College and a speculative fiction reviewer for Publishers Weekly. His current project is a non-traditional narrative history of Ferrum College titled “As It Is Nowhere On Earth”, focusing on the people who called Ferrum home and what life was like on campus at different times through its history.
Facebook: https://www.facebook.com/Madwriter

Posted by Chris Rice Cooper Blog at 7:10 AM