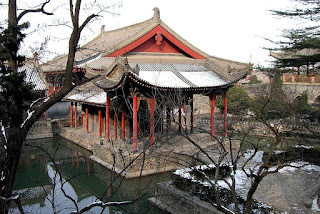 Can you go through the step-by-step process of writing this poem from the moment the idea was first conceived in your brain until final form?  I spent a year teaching as a Fulbright lecturer in Xi’an, China, (Left) where I lived with my family. Part of being a 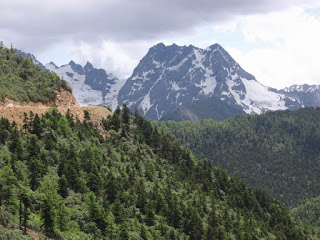 Fulbrighter is traveling and giving talks in other cities, and because my partner is fluent in Mandarin, having lived for a number of years in Beijing, we were able to meet diverse people and get unusual access. On one of those excursions, to a place in Yunnan province (Right), in the south-western part of China, where we each gave talks, I was able to spend a day hiking up to a remote tea plantation. When I arrived the workers (Below) were digging a culvert, while others were painting Buddhist statues. I lent a hand to their efforts, and they invited me to have lunch with them. Afterwards, I went to pay my respects at the Buddhist temple, and came upon this figure in a side altar. 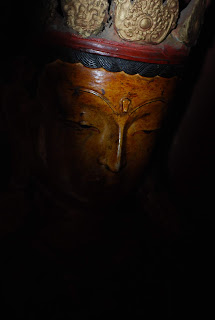 Where were you when you started to actually write the poem?  And please describe the place in great detail.  I knelt at the altar, amazed and the moving images blustering around me, both crude and powerful. I pulled out my cell phone and began to describe the images before me. Outside I could hear wind chimes and the voices of the workers getting back to their jobs. We were half-way up a mountain, and the air was crisp and my breath fogged my view. (Left:  attributed and copyright permission granted by David Sullivan for this CRC Blog Post Only) 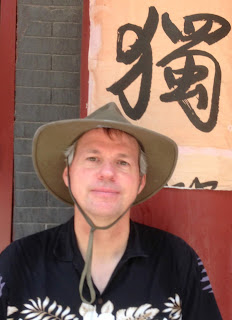 What month and year did you start writing this poem?  That was in 2012, in November, because I remember there was some snow on the ground. (Right:  Copyright permission granted by David Sullivan for this CRC Blog Post Only) 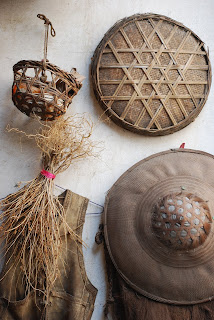 How many drafts of this poem did you write before going to the final? (And can you share a photograph of your rough drafts with pen markings on it?)  When I began to the poem is was simply a description of the amazing plaster statues. Bit by bit, I began to explore the ideas of faith and doubt that permeated my thinking. I probably wrote twenty drafts as I refined the words and discovered the core of the poem. The earlier version of the poem I found (I never did have a hard copy to mark up, simply worked on it on phone, and then laptop), doesn’t have the dropped lines, which help a reader feel the turns in the poems. (Left:  Copyright permission granted by David Sullivan for this CRC Blog Post Only) 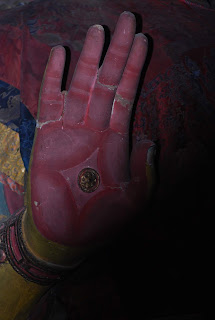 Were there any lines in any of your rough drafts of this poem that were not in the final version?  And can you share them with us?   The line: “to bat the paper-mâché peach / that wears a red blush.” Was dropped. It was too active, non-meditative, and forced the color images too far. (Right:  Copyright permission granted by David Sullivan for this CRC Blog Post Only) 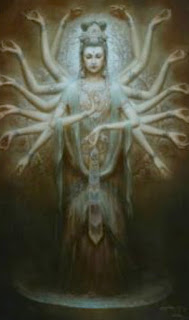 What do you want readers of this poem to take from this poem?  I’d like them to feel what I felt, both the attraction to a religious tradition that grants one a sense of security and comfort, and a suspicion of any system that claims to provide such comfort. (Left:  Guanyin.  Public Domain) 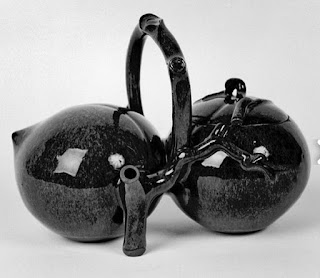 Which part of the poem was the most emotional of you to write and why? The last line, which only came after multiple drafts, expresses the desire for faith—using the direct address to the goddess depicted, and acknowledges the way that faith is dangled beyond our reach—like that immoral peach from ancient Chinese mythology. (Above Right:  Chinese ceramic teapot in the form of two peaches - a symbol of immorality or wish for a long life.  Public Domain)

Oh Guanyin,
loan me an arm to pluck down
what none of us will ever taste. 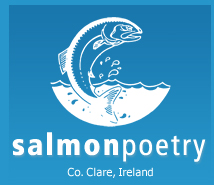 Has this poem been published before?  And if so where?  No, but it will be in my next book, “Seed Shell Ash,” which is forthcoming from Salmon Press.
https://www.salmonpoetry.com

At the tea plantation temple’s side
altar I stumble upon Guanyin,
crudely but affectionately carved
out of rough-hewn plaster.
Garishly painted, surrounded
by a horde of minions clambering
over ill-sculpted rocks: acrobats
and tiger tamers, yoga adepts,
twins fighting over a top, a pair
yanking on a reluctant ox, and
behind, a figure with a hugely
extended arm, as if he’d stretched
one of Guanyin’s thousands
to bat the paper-mâché peach
that wears a red blush. Oh Guanyin,
loan me an arm to pluck down
what I will never, in this life, taste.

My books include: Strong-Armed Angels, Every Seed of the Pomegranate, a book of co-translation with Abbas Kadhim from the Arabic of Iraqi Adnan Al-Sayegh, Bombs Have Not Breakfasted Yet, and Black Ice. I won the Mary Ballard Chapbook poetry prize for Take Wing, and my book of poems about the year I spent as a Fulbright lecturer in China, Seed Shell Ash, is forthcoming from Salmon Press. I teach at Cabrillo College, where I edit the Porter Gulch Review with my students, and live in Santa Cruz with my family. My poetry website is: https://dasulliv1.wixsite.com/website-1,
a modern Chinese co-translation project is at: https://dasulliv1.wixsite.com/website-trans, and a call for poetry about the paintings of Bosch and Bruegel for an anthology I’m editing with my art historian mother is at: https://dasulliv1.wixsite.com/website