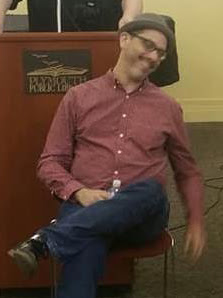 #35 Backstory of the Poem
“Sobriety”
by Timothy Gager
ctgager37@yahoo.com 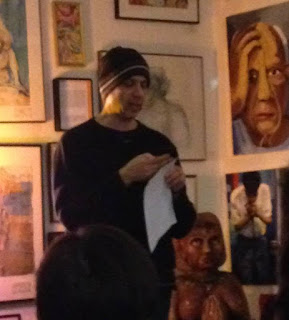 Can you go through the step-by-step process of writing this poem from the moment the idea was first conceived in your brain until final form?  This is a short poem, and like most of what I write, was formed from a visual element from a place I was at. It was conceived while sitting, waiting for a meeting of Alcoholics Anonymous to begin, a fellowship I don’t hide the fact that I belong to. This particular meeting was at a location which had comfortable sofas, and art on the wall. There was a newcomer sitting there, just starting at this Piccaso reprint, and also, the other art---so,  I wanted to tell this person that sobriety can exist, be comfortable, take it in small steps, one day, one hour at a time, just like that painting you were staring at, was made—one brush stroke at a time, and it took a lot of brush strokes. (Title Photo-Timothy Gager on 10-14-2018 and Above Right Timothy Gager on January 3, 2014.  Copyright permission for both photos granted by Timothy Gager for this CRC Blog Post Only) 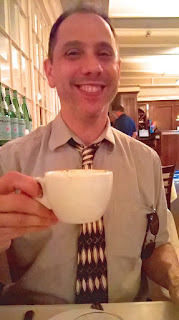 I also wanted to say that to her that coffee is a mainstay at meetings, so drink it, and not anything else. (Left:  Timothy Gager drinking a cup of coffee in July of 2015.  Copyright permission granted by Timothy Gager for this CRC Blog Post Only)

I don’t know if I had a specific process with this particular poem. It probably began with the first two lines, followed by free writing. Then, I balanced the lines, the stanzas, tossed out what didn’t work---made sure the beginning and ending of the poem worked to my liking. 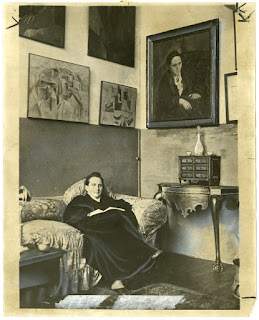 When I fine tune I like double meanings, for example “Sit on the sofa, legs curled under…” as one line it’s the person’s legs, but if you take it a line at a time, it’s the sofa…not making the person comfortable, the physical wooden legs curling under, or “view the oil paintings, hung boats and fields” The paintings are hung, the boats are hung, the fields are hung. It’s general, and it’s specific to the art. (Image I Told Him:  A Complete Portrait of Picassa, 1932.  Gertrude Stein sitting on a sofa in front of a painting of herself by Picassa at her residence at 27 Rue de Fleurus.) 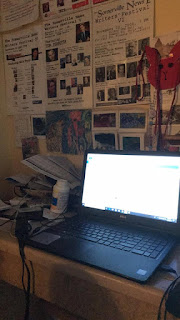 Where were you when you started to actually write the poem? And please describe the place in great detail?  I went home and started the poem. My work space is a desk with a laptop on it, in the corner of my living room, faced away from the television. The desk area is full of papers, and they surround the laptop on three of the four sides 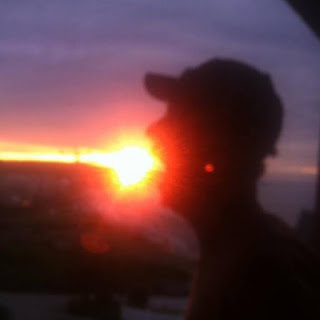 What month and year did you start writing this poem?   I have absolutely no idea. Anywhere after 2014 and before 2017 (Timothy in July of 2014. Copyright permission granted by Timothy Gager for this CRC Blog Post Only) 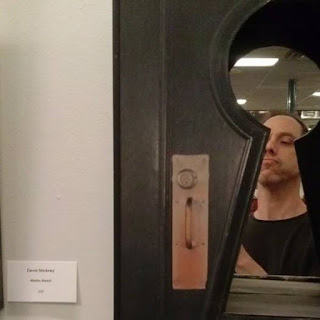 How many drafts of this poem did you write before going to the final? (And can you share a photograph of your rough drafts with pen markings on it?)  This poem took 8-10 drafts. I edit on the computer so there are no pen marked papers.  I work with a lot of musicality and after some time I fairly aware of my poetic voice. I’m fond of the delete button for the final draft if things don’t work out. (Left:  Timothy Gager in March of 2015.  Copyright permission granted by Timothy Gager for this CRC Blog Post Only) 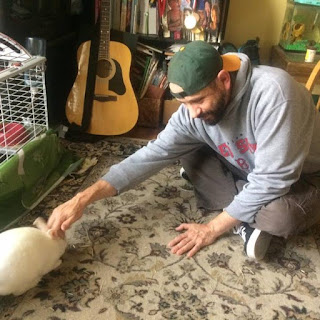 Were there any lines in any of your rough drafts of this poem that were not in the final version? And can you share them with us?   Heck, I’m getting old. I have no idea what was edited out.  (Right:  Timothy Gager in December of 2016.  Copyright permission granted by Timothy Gager for this CRC Blog Post Only) 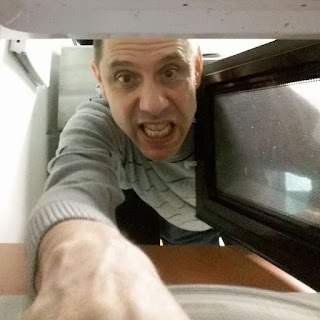 What do you want readers of this poem to take from this poem?  That there is hope after surrendering.

Which part of the poem was the most emotional of you to write and why?  The ending. It’s the awe of a journey’s beginning and a journey, in general.  I’ve very grateful from where I’ve come from, and I can get emotional about it (Left:  Timothy Gager in March of 2017.  Copyright permission granted by Timothy Gager for this CRC Blog Post Only)

Has this poem been published before? And if so where?  published in the book, Chief Jay Strongbow is Real, 2017, Big Table Publishing

Anything you would like to add?  Keep writing people. There’s a lot of very important things going on.

It can exist
drink coffee

Sit on the sofa,
legs curled under 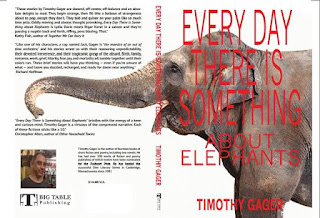 Timothy Gager is the author of fourteen books of short fiction and poetry. Every Day There Is Something About Elephants, a book of 108 flash fictions, selected by over fifty-five editors, was released by Big Table Publishing in 2018. 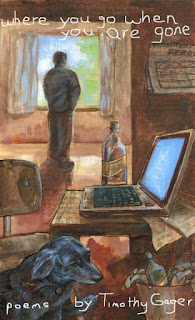 He's hosted the successful Dire Literary Series in Cambridge, Massachusetts since 2001 and was the co-founder of The Somerville News Writers Festival. He has had over 500 works of fiction and poetry published and of which thirteen have been nominated for the Pushcart Prize. His work has been read on National Public Radio.