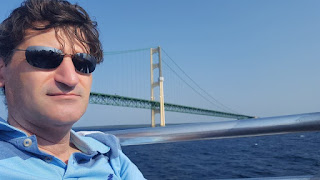 #45 Backstory of the Poem
“Sungmyo”
by Ian Haight

Can you go through the step-by-step process of writing this poem from the moment the idea was first conceived in your brain until final form?  To be fair to the process of “Sungmyo,” I have to start at the very beginning, which was the decision to take poetry and writing seriously, and to that end I enrolled in Goddard College’s MFA program. I was reading a lot of different material at the time, trying to understand all the incredible possibilities there are in poetry and how those possibilities are realized. I had been reading the poetry of Gary Snyder, and as a reader, had been experiencing a love-hate relationship with him. On the one hand, his poems felt technically and thematically simplistic compared to what I thought poetry should be; on the other, when I closed the last page of his book, The Back Country, I had a jolt, which I have never experienced with any other poet. The jolt was feeling like I had lived his life—or a life. I realized the power of Snyder’s poetry for me wasn’t in any single poem, but the tonal evocation of a united collection. For the record, after reading many of Snyder’s books and more fully appreciating his range, precedent, and lineage in poetry—which I think goes back to Wordsworth (below, left), at least—I believe he is one of the truly great American poets of the 20th Century. 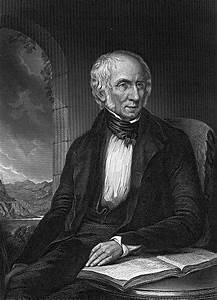 I was thinking about how Snyder made a collection live, which for me came down to the question of how he made a poem invoke life. There was nothing necessarily extraordinary about the incidents Snyder was writing about. The topics felt common and everyday (walking in a forest, walking in a city, working on a house, attending a meeting), but the attention to detail and the reflective perspective in that detail is what created a point of view that I as a reader could engage with. Ok, so if I admired this approach to writing so much, what if anything could I use in my own writing? 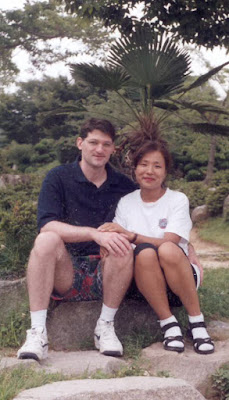 At the time of all this poetry exploration I was living in Pusan, Korea, and I was and still am married to a Korean woman. Traditionally in Korea, males of a family are supposed to visit the graves of their deceased parents or grandparents during Chusok, which is a kind of Korean Thanksgiving. My wife’s parents had no sons—only daughters, five daughters—and so this custom fell to the husbands of the daughters. My mother-in-law was still alive but my father-in-law had died soon after my wife was born, so there was a need to go to his grave and perform a ceremony. Because I was American I had no hometown in Korea to visit during Chusok. It fell to me and one of my elder brothers-in-law to carry out the ceremony. (Right: Ian and wife in Pusan, Korea in 2004.  Copyright permission granted by Ian Haight for this CRC Blog Post Only) 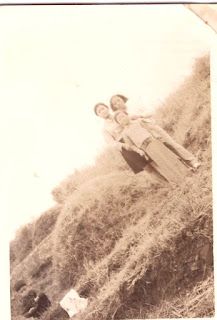 We lived at the base of a very small hill-enclosed valley, and my father-in-law’s tomb was near the top of the valley. I felt like this ceremony, in the spirit of Snyder, might be a piece of life worth writing about. The process of the poem is straightforward: I wrote about going to the gravesite, conducting the ceremony, and a noteworthy incident on the way back. (Left:  Ian's father-in-law's burial mound with three daughters and one nephew present.  Copyright permission granted by Ian Haight for this CRC Blog Post Only) 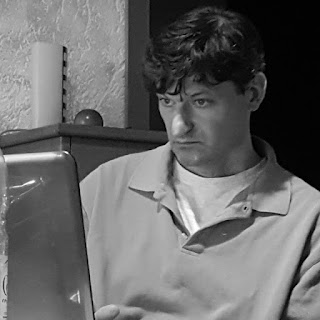 In terms of craft I breath-broke the lines to make them reflective of life. Looking at the initial draft of the poem I am surprised by how much it resembles the final draft, even though I went through more than twenty versions. Expansion of details and the title were the chief revision issues. I particularly struggled with the title because I couldn’t figure out how to succinctly inform a non-Korean reader regarding the what and the why of the poem. (Right: Copyright permission granted by Ian Haight for this CRC Blog Post Only) 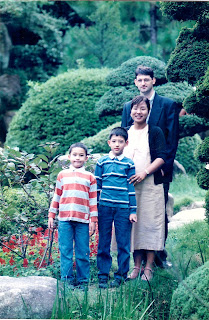 Where were you when you started to actually write the poem? And please describe the place in great detail.   At the time of the poem’s writing, we lived in one of a collection of four-unit condos. My family was a bit young then. My two sons had been born but they were both under the age of eight, so although our three-bedroom unit was small by the American standards I was familiar with (about 1,200 square feet), it was livable for our family size. Because I was doing graduate work half of one of the rooms was my own. There was space for a bookcase or two of books and my computer desk—that was it. I did all of my writing on the computer. The walls of the room, like all the walls of all the units, were concrete, but papered with some standard flower print on a white background. The floors had a plastic surface, which emulated a shade of wood. The sliding wood-framed windows were barred, large and opaque, but opened to a view of the forested hill. I could hear birds; I was happy for that. (Right: Ian Haight family photo - wife is pregnant with their daughter.  Copyright permission granted by Ian Haight for this CRC Blog Post Only)

What month and year did you start writing this poem?  Looking at the file dates that are still intact, I had to have written the first draft around September-October 2002. Chusok is annually held in September. (Left: Ian in October of 2002.  Copyright permission granted by Ian Haight for this CRC Blog Post Only)
How many drafts of this poem did you write before going to the final? (And can you share a photograph of your rough drafts with pen markings on it?)  I may have drafts with markings on them, but if I do they are in storage, so I will attach the earliest draft of the poem and the most recent draft for comparison. 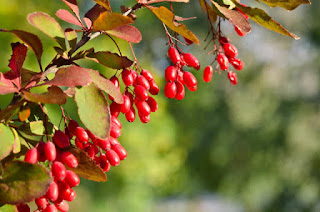 Were there any lines in any of your rough drafts of this poem that were not in the final version? And can you share them with us?   There’s only one line that got cut. In the fifth stanza, line 3: “and red berries” (Right, Korean berries) was deleted because I felt like it was too much detail and made the poem clunk. To me it felt like a detail that was not entirely necessary in comparison with what was rhythmically gained by losing it. The first line lost the phrase “Yellow fin” to describe the kind of fish for the same reason, and because it wasn’t authentically true. People laid out all sorts of different fish. 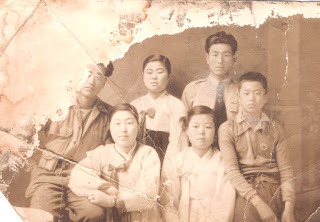 What do you want readers of this poem to take from this poem?   That we are all capable of entering and being received by different cultures and communities no matter what we look like or what skills we may/may not possess. It doesn’t always happen but it can happen to anybody and everybody regardless of identity. This gives me hope for humanity. Maybe also that there’s a lot of love in this world. It’s not always easy to see and it might be different from what I am used to experiencing but that does not mean the love is not there. (Ian Haight's father in law is wearing the necktie.  Copyright permission granted by Ian Haight for this CRC Blog Post Only) 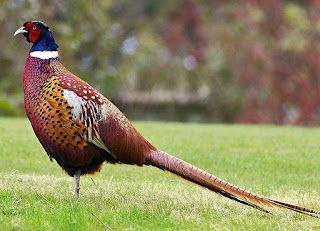 Which part of the poem was the most emotional of you to write and  why?

The ending, for sure. To see that pheasant rise and then to place it in context of the poem…I got what that meant when it happened but I didn’t really feel it until I re-read it in the finished poem. It’s spiritual—and very Korean. I love that I can  deeply feel what that moment means even though I am an  American white male. I also love that Korean people understand and respect my authentic experience. 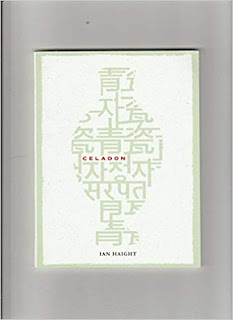 Has this poem been published before? And if so where?  Quarterly West and Barrow Street both published it in 2003. I think Quarterly West accepted it first and when I notified Barrow Street they said they were going to publish it anyway, regardless. The publications came out pretty quick after that so there wasn’t much more to be said to either journal. Funny how that worked—I wish I experienced poetry publishing that way more frequently. 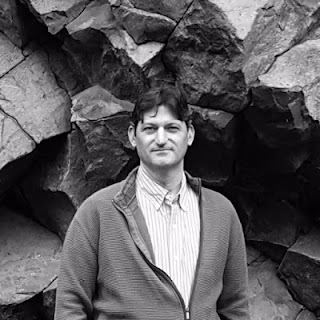 Anything you would like to add?
Thank you again for inviting me to participate in this.  It was fun to look back and revisit not only the poem, but where I was at as a writer and the life I was living at the time.

Sungmyo for Our Dead Father-in-Law

By the doors of houses,
fish heads on newspapers
with oranges
and deep-fried sweet potatoes
for the street gods.

We light a cigarette,
smoke some;
lay it on dried grass
at the base
of his burial mound

pour makali into a cup,
drink some,
put it in front of the smoke

place oranges
rice cakes—
some made with sticky corn syrup,
others sweetened with ginger,
squid strips
and bananas
on the plates

stand in a row
we bow like Buddhists
three times

ask about the names of trees,
talk about how the jays
gathered and croaked
in old villages
when someone who didn’t live there
would come

or how the children
followed GI’s
saying,
Ajashi, gum please!

Notice how the cigarette is smoked,
and remember how the old man
finished thirty a day

how he got a children’s book
in English,
though no one could read it,
and wrote his daughters’ names
in Chinese
on the first page.

At the bottom of the hill
the copper-colored body
of a green-headed pheasant
flaps to the heights
of white pines,
trailing its long
brush-stroked tail feathers
two feet behind the breast. 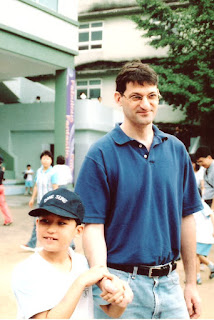 Ian Haight’s book, Celadon, won the 2016 Unicorn Press First Book Prize for poetry and was published in the fall of 2017. He is the editor of Zen Questions and Answers from Korea, and with T'ae-young Ho, he is the co-translator of Borderland Roads: Selected Poems of Kyun Hŏ and Magnolia and Lotus: Selected Poems of Hyesim—finalist for ALTA’s Stryk Prize.   Other awards include Ninth Letter’s Literary Award in Translation, and grants from the Daesan Foundation, the Korea Literary Translation Institute, and the Baroboin Buddhist Foundation. (Left:  Ian with his youngest son Brennan in Pusan in 2003. Copyright permission granted by Ian Haight for this CRC Blog Post Only)