#47 Backstory of the Poem "Memorial Day" by Jeffrey Pearson

***This is the forty-seventh in a never-ending series called BACKSTORY OF THE POEM where the Chris Rice Cooper Blog (CRC) focuses on one specific poem and how the poet wrote that specific poem.  All BACKSTORY OF THE POEM links are at the end of this piece.
Below: Title photo of Jeffrey Pearson in November of 2018.  Copyright permission granted by Jeffrey Pearson for this CRC Blog Post Only.

#47 Backstory of the Poem
“Memorial Day”
by Jeffrey Pearson 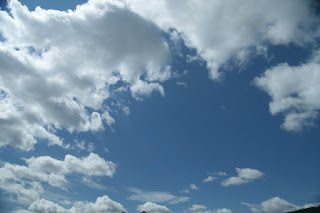 Can you go through the step-by-step process of writing this poem from the moment the idea was first conceived in your brain until final form?   Poetry prompts tend to be hit and miss with me. Mostly miss. The prompt for this poem was to write from a photograph. Much of what I wrote is true and much is not, notably the fact this photograph does not exist except in my mind’s camera.(Above Right.  Attributed to and copyright permission granted by Jeffrey Pearson for this CRC Blog Post Only) 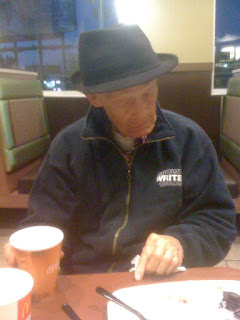 Dad wore a t-shirt out in the heat of a holiday weekend at relatives, listening to the Indianapolis 500 on the car radio. It was in DeKalb, noted for seed corn, not Chicago remembered for its big shoulders and its politics. Somehow relatives morphed from one family to another with some sharp details. I’ve written many dad poems, so this began long ago. (Left:  Gerald Ira Pearson on September 11, 2012.  Copyright permission granted by Jeffrey Pearson for this CRC Blog Post Only)
The legacy father passes to son has fascinated me since viewing Bertolucci’s film “The Spider’s Stratagem.” Any dad poem written by a son has me asking what ripples cast out by the father wash up at the feet of the son. 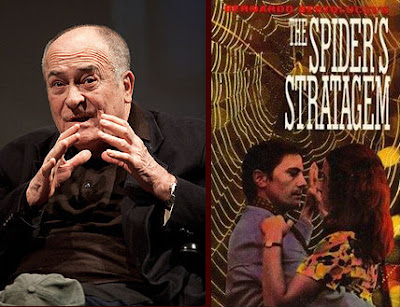 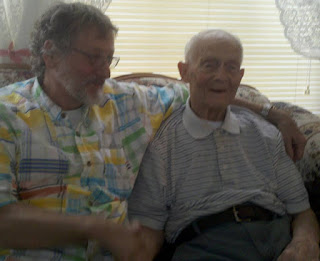 Where were you when you started to write the poem? And please describe the place in detail.  What month and year did you start writing this poem?   I might have started the poem in a workshop, but the first time on a computer was an afternoon in July 2013. I work on a heavy library table, nearly always typing in Pages or Word. A snowdrift of paper covers much of the surface, and I can find things until I need to. (Right:  Father and Son in June of 2013.  Copyright permission granted by Jeffrey Pearson for this CRC Blog Post Only) 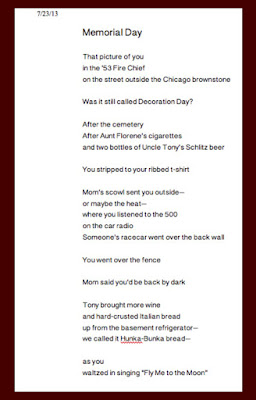 How many drafts of this poem did you write before going to the final? (And can you share a photograph of your rough drafts with pen markings on it?) Were there any lines in any of your rough drafts of this poem that were not in the final version?  And can you share them with us?   I can resurrect three significant changes. Firebird gets replaced by a more generic and accessible Pontiac 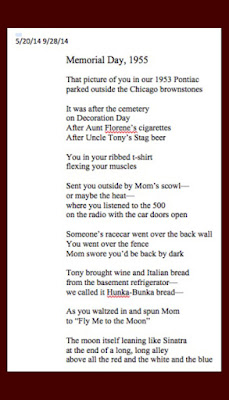 Schlitz beer changes to Stag in a later draft. I often begin poems without punctuation. For the most part, this poem stayed that way, but some lines were brought up. 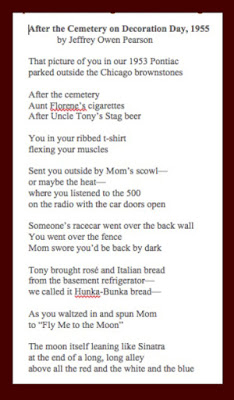 I listen to a campus radio station late at night which plays a lot of Sinatra. He wormed his way into the end months later and nicely shadows the moon and dad.

No poem is ever finished. The title has changed since it was published, along with a little tightening up.

What do you want readers of this poem 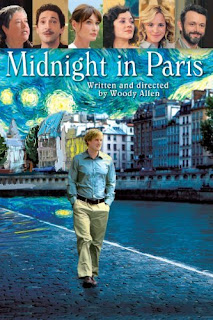 to take from this poem?   What can I say? If you’ve seen “Midnight in Paris,” you’ll understand: Dalí! The persistence of memory, but the fact it is liquid. 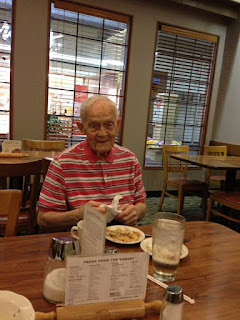 Which part of the poem was the most emotional of you to write and why?   I suppose the most resonant part of the poem is dad leaving. He suffered with Alzheimer’s, so he spent a long time leaving before he died. This was written during that time. (Left:  Gerald Ira Pearson in June of 2014.  Copyright permission granted by Jeffrey Pearson for this CRC Blog Post Only)

Has this poem been published before?  And if so where?   The poem was published on Flying Island and later, the Indiana Humanities website.
https://indianahumanities.org/memorial-day-1955 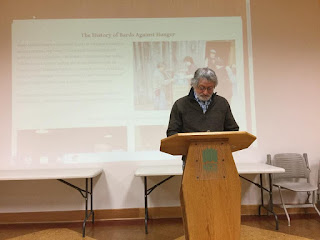 Jeffrey Owen Pearson’s poems have appeared in The Best of Flying Island, So It Goes, Reckless Writing 2014 Anthology, Tipton Poetry Journal, Flying Island, and Maize. “I have fallen asleep again reading Homer” placed third in the 2014 Writers Digest Poetry Awards. Pudding House Publications published his chapbook Hawaii Slides. A board member of the Midwest Writers Workshop, he lives in Muncie, IN.
jjopcelia@comcast.net
https://jeffreyopearson.wordpress.com