#64 Backstory of the Poem "Shiprock" by Terry Lucas

#64 Backstory of the Poem
“Shiprock”
by Terry Lucas

Can you go through the step-by-step process of writing
this poem from the moment the idea was first  conceived in your brain until final form?


The idea for “Shiprock” technically began while I was a student at New Mexico State University taking a creative writing (poetry) class under Keith Wilson. However, the poem had actually begun in my subconscious as a nine-year-old boy in 1959. My family moved from southern Illinois to northwestern New Mexico. I could see the actual peak of Shiprock from my backyard, even though it was 35 miles away. It rose some 1600 feet above the desert floor, tinged in the blue that affects all geological features in the distance. This peak, however, had gotten its name in English because it appeared to be a ship shrouded in fog, sailing across the high desert sands. Also, one time my father borrowed his friend’s MGA, and drove my mother and I across the desert (off-road) to the base of the rock. I’ll never forget that experience either, how it kept growing in our field of vision until it loomed above us, reminding me of pictures I’d seen of Mt. Sinai, where God appeared to Moses. Shiprock (Tsé Bit ’a’i in Navajo) was a sacred mountain and had several creation and apocalyptic oral traditions about it—the most popular that the rock was the tail of a giant bird that had brought “the people” down from the north, and would return at the end of the world. All of that background was in my subconscious when I picked up my pen to write the poem's first draft. 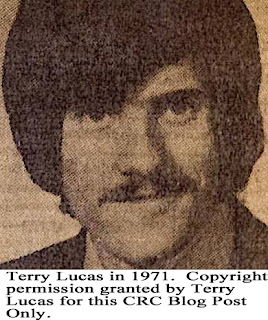 Where were you when you started to actually write the poem?  And please describe the place in great detail. I wrote the first draft of the poem entitled "Shiprock" while seated at my desk (a library table I purchased for $2 at a school auction), in my apartment in Deming, New Mexico in the early 1970s. I was newly married and the only apartment we could afford was a service station that had been converted into an apartment.  The former grease pit became the living room, a storage room the bedroom.  The pumps and the island separating the two lanes where cars had pulled in to fill up were still out front.  The office of the filling station remained intact and was where I studied for classes as I worked on my bachelor's degree in Philosophy and English Literature.  We had to keep our doors locked or tourists would walk into our house looking for an attendant to pump gas. With coyotes yipping outside (we were at the edge of town), one night I conjured an image that my best buddy in high school took of Shiprock at dusk with the full moon rising, and I began writing the opening lines to the first draft. 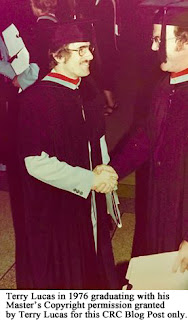 What month and year did you start writing this poem?  Definitely the spring semester of 1971 - probably January or February because the poem was part of my first batch of poems I showed Professor Wilson.

How many drafts of this poem did you write before going to the final?  (And can you share a photograph of your rough draft with pen markings on it?) I can only estimate the number of drafts - somewhere between 50-100.  I began submitting it to journals over 40 years ago.  The first draft is gone, as well as most of the early drafts. 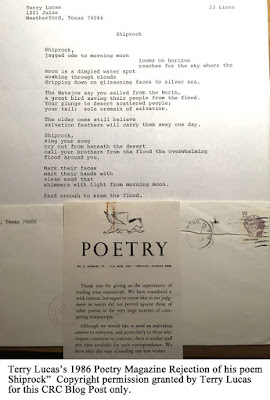 The oldest one I have left is a draft returned by Poetry in 1985 - rejected, of course. I was so naive when I began sending out work.  I sent to top tier journals like The New Yorker, Ploughshares, Poetry, Agni, and all the other top tier journals. (I've attached a photograph of the 1985 draft, which is nothing like the final version.) 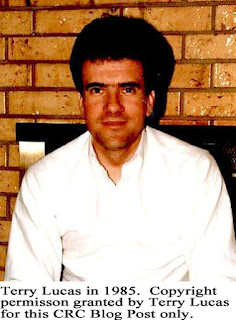 Were there any lines in any of your rough drafts of his poem that were not in the final version?  And can you share them with us?  As I've indicated in my answer to the previous question - yes, there were many lines in early drafts that didn't make the final cut.  The entire first stanza was replaced with another.  Also, other stanzas were added between the remaining early stanzas. 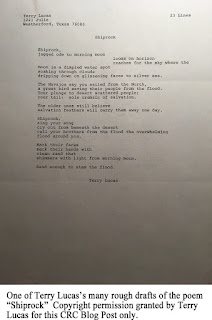 What do you want readers of this poem to take from this poem? Among other things, the poem is about the intersection of cultures and their stories, and how new ones do not have to drown out the older ones.  Also, for writers, this poem is a success story of how never to give up on a poem or to quit sending it out into the world.  It took over 40 years for the poem to be published after its first draft was written. 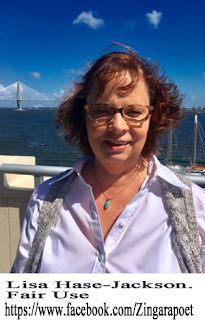 Has this poem been published before?  And if so where? The poem was first accepted and published by Lisa Hase-Jackson in 2012 in an online journal called 200 New Mexican Poems (2012).  The journal celebrated the bicentennial of New Mexican statehood, and was of two journals selected by the New Mexico Bicentennial Committee as an official activity of the celebration.  It was also  published in Dharma Rain (Saint Julian Press, 2016) 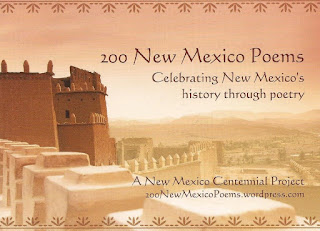 Anything you would like to add?  Poets and writers need one another.  I am grateful to Christal Cooper for featuring "Shiprock" in her terrific blog.  I am indebted to scores of mentors and editors, and to hundreds (thousands?) of readers, without whom much of my larger body of work would not exist, or would not be available through the many fine presses and journals that have so graciously published it.  Most of all, I would like to thank my partner, Janet.  Without her, neither my writing life nor my personal life would be capable of sustaining the creative spark necessary for success at the level they have attained.

Cutting your way through dust storms, waves
Of sand blow over your prow, settle on foils of stone,
Wash down the ribs of your hull to crystal sea.

The Navajos say you sailed from the north,
A great bird saving their people from the flood,
Crashing into the desert, burying all
But your wings and tail: sole cremains of salvation.

What is it that makes a man or woman
Set out on foot for you? Your jagged masts that reach
For gibbous moon? Ancient lens of atmosphere?

The old ones still believe the blood
Will return to petrified feathers,
Carry them away when the flood returns.

Shiprock! Cry out from beneath the desert;
Call your brothers and sisters from the flood.

The overwhelming flood of sand
Is all that will mark their graves.

Sand enough to stem the flood. 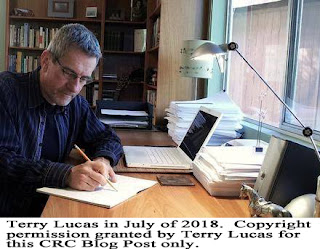 Terry Lucas is the author of two full-length poetry collections: Dharma Rain (Saint Julian Press, 2016) and In This Room (CW Books, 2016). His two prize-winning chapbooks are Altar Call (San Gabriel Valley Literary Festival, 2013), and If They Have Ears to Hear (Southeast Missouri State University Press, 2012). He has received numerous other writing awards, including the 2014 Crab Orchard Review Feature Award in Poetry, and six Pushcart Prize nominations. Terry is a guest lecturer for Dominican University of California’s low-residency MFA program in creative writing, and a free-lance poetry coach. His current projects include a memoir entitled Flight, and an in-progress third poetry collection.