#60 Backstory of the Poem "Menopause" by Pat Durmon

***This is the sixtieth in a never-ending series called BACKSTORY OF THE POEM where the Chris Rice Cooper Blog (CRC) focuses on one specific poem and how the poet wrote that specific poem.  All BACKSTORY OF THE POEM links are at the end of this piece.
Bottom Left:  Pat Durmon on January 12, 2019.  Copyright permission granted by Pat Durmon for this CRC Blog Post Only 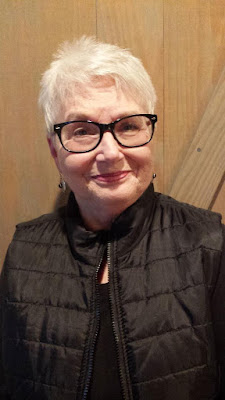 #60 Backstory of the Poem
“Menopause”
by Pat Durmon 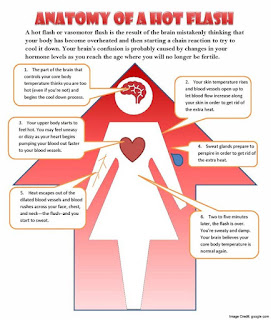 A casual comment by a woman led to the creation of this poem. I heard her tell how her husband remarked on her hot flashes being like a burning bush. The observation resonated with me because my husband had made similar remarks as he grazed my arm or wanted to snuggle. 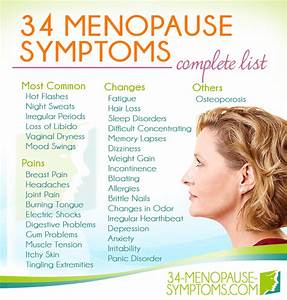 I had no intention of writing a poem about this subject, but after pondering it for some days, I realized how universal the subject was. Men, having to deal with women’s hot flashes throughout menopausal years; women, having to live through their bodies building fires, smoldering, then dying out. 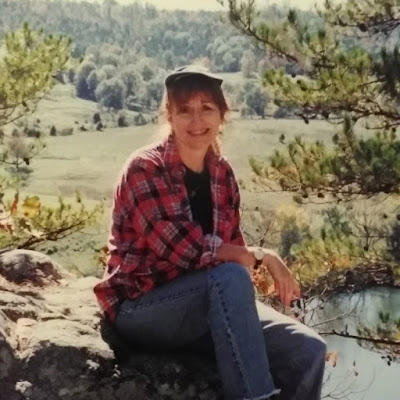 Unlike most of my poems, the title came first. I knew what the poem was about. I did not know where it was going.  I started the poem with my situation for at least 15 years (in 2004 Right). I was overheated. Women who knew me gave advice and laughed heartily. They knew I was headed into a forest fire. Then, I just reported how my body grew heat when I would lie down. I went on with the long night, my misery, the burning. 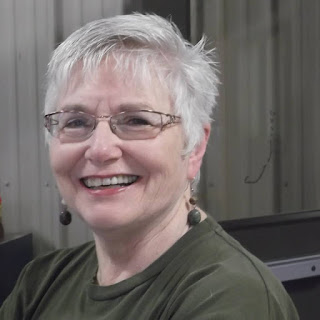 I was a hot surface. Touch was the last thing I wanted. It would be pretty stupid if you did not understand that I needed space, not closeness.

What month and year did you start writing this poem?   I wrote “Menopause” in 2016 (Left) and won a First Place in a monthly contest with it in Poets Roundtable of Arkansas. 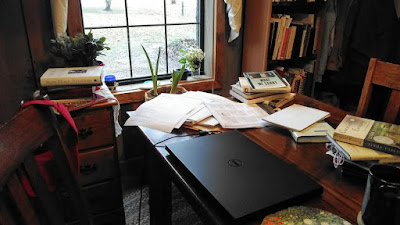 How many drafts of this poem did you write before going to the final? (And can you share a photograph of your rough drafts with pen markings on it?) Before entering that contest, the poem had undergone about 15 or more revisions. I edit a poem to get rid of the weeds. It takes weeks and sometimes months. I have to let it get cold, then edit again. I send my poems to two or more critique groups. It may be that someone in the critique group suggests a minor or major change. I listen to all suggestions, but I am clear that I own the poem. I may keep it as is or make changes. (Above Right:  Pat Durmon's writing space in her Arkansas home. Copyright permission granted by Pat Durmon for this CRC Blog Post Only) 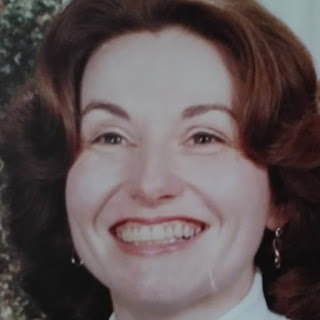 What do you want readers of this poem to take from this poem?   Whatever women need to take for themselves from this poem, I am delighted to give it to them. Menopause is a rough stage for many of us. It helps if women know it is a stage of growing older, but it is something we age out of. I think I started when I was forty (Left) and it eased up 15 years later when I said, “Praise the Lord! 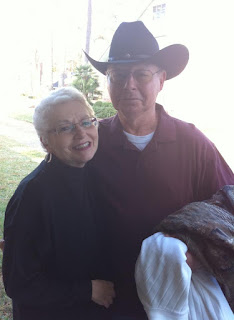 Which part of the poem was the most emotional of you to write and why?   The lines “I don’t understand how I build my own heat and smolder” gave me permission to take the poem any direction I wanted to. I went to my husband’s reactions and then how I was alone with the burning.     At the end, I saw the irony in it all. It was then that I could add a little fun to it like the woman laughing at her husband (Pat with hubby Right) 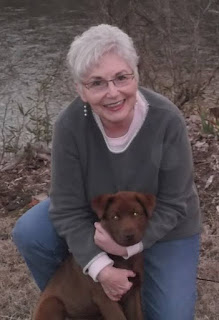 Anything you would like to add?   This poem had a lifecycle in its making. In it, I revisited all those years of being in midlife and living with menopause. Like a teen living through adolescence, nothing about menopause requires forgiveness. (Left:  Pat Durmon with her dog in June of 2016.  Copyright permission granted by Pat Durmon for this CRC Blog Post Only) 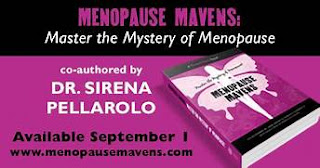 It just is what it is. Biologists can explain it, but women carry a mystery most really don’t care to understand themselves when going through the burning fire. They just want to survive menopause. That’s the part I hoped to capture. 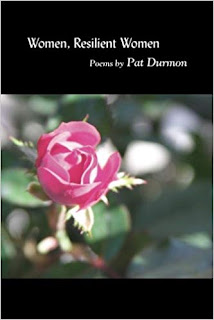 I wrote this poem after publishing three books. I needed to write poems about common miracles, what I thought would be my fourth book. Instead, I was writing girl/woman poems. I just couldn’t seem to write about anything else. Because of that, I put the Common Miracles manuscript aside and let my muse have her way. I stopped fighting with myself about poems and wrote more poems to be published in Women, Resilient Women in 2018.  This poem will be included in Women, Resilient Women in 2018. 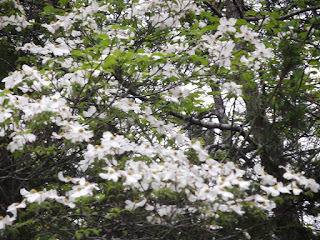 The poem, as I look at it now, is part of my feminine history, but I find myself still attracted to it. In fact, it is the poem I read aloud to a group of women one week ago. (Right:  Spring in April of 2017.  Attribution and copyright permission granted by Pat Durmon for this CRC Blog Post Only)

My body stays overheated
like the world news. I am told
by bold, honest women
to get ready for a forest fire.

In January, I lie down
beside my husband, and my body
is certain it’s high July.

I don’t understand how I build
my own heat and smolder.

My husband’s hand grazes
my arm. He jerks it back, saying
I’m smoking, saying I’m hot like
a burning bush.

In the long night without end,
I try to lie quiet, picture icebergs,
pray. Burning questions
dum-ditty-dum in my bones,
keeping me on a red edge. 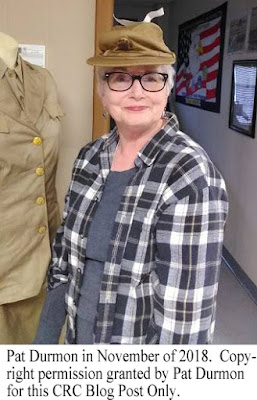 Pat Durmon is the author of four poetry books: Blind Curves (2007), Lights and Shadows in a Nursing Home (2013), Push Mountain Road (2015), Women, Resilient Women (2018).  Poems have been published by Rattle, Main Street Rag, Poetry East, Encore, Cyclamens and Blades, Between the Lines, Lucidity, Cantos, and other journals. She is the recipient of numerous honors and awards. Pat Durmon is a speaker and blogger: patdurmon.com. 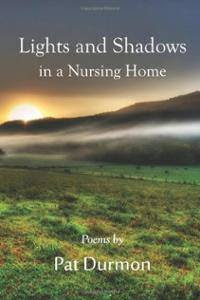 She taught school in Jonesboro, Arkansas before obtaining her Ed.S. Degree in counseling at Arkansas State University.  She and a business partner were the first women to open a private counseling practice in Jonesboro. Her writing reflects her various careers, miracles she notes in the ordinary, her depth and playfulness. Pat currently facilitates two on-going and open groups: 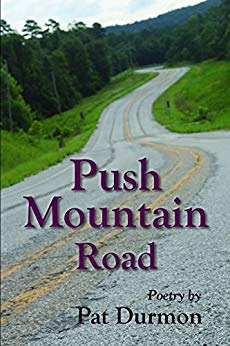 Searching for Light (support group for families who deal with dementia/grief) and Sisters Journey Group (spiritual growth group). She also speaks at Home Poetry Readings in her surrounding area.  She is a native Arkansan and lives in the Ozarks with her husband and two dogs. She sees herself as lighter and more joyful after writing a blog or poem.