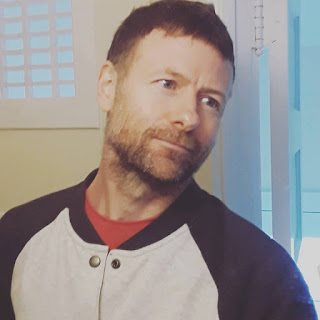 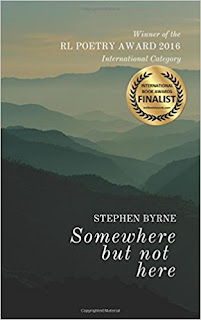 Can you go through the step-by-step process of writing this poem from the moment the idea was first conceived in your brain until final form?   This was one of the first poems I wrote that would go on to inspire the collection that became my book ‘Somewhere but not here’, and it just so happened, that at the same time as I was beginning to participate in the ‘How Writers Write Poetry’ with The University of Iowa’s International Writing Program, the bombardment of Gaza by Israel in July 2014 was beginning too. 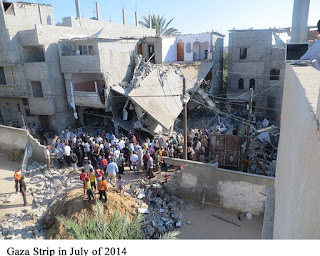 I was given an exercise to create a rhymed poem without using any rhymed words, sort of a song like poem, very challenging, and In the meantime, I was keeping any eye on the conflict which was now turning into a slaughter.

I came across a video of a father in a makeshift hospital room, screaming for the child to wake up, holding a dead child in his arms and trying to give the child a doll, while other family members tried to console and make him put the child down.
https://media.
alwatanvoice.com/
video/21c7141422f4083e.mp4
I was devastated watching this. I was ready to get online and voice my anger when it dawned on me that this was pointless. That this was yet again, just another person behind a laptop, from the comfort of a nice home, raving on about a conflict far away from a west of Ireland apartment, safe, warm. This was how the idea for world-issue stories from unheard voices gave birth to this poem, and the book.
The images would not leave my head. The sound of the crying. The doll. The child. Therefore, I wrote a first draft that I believe took no longer than 10 minutes, incorporating the voice of the father, placed in the madness of the bombing and chaotic surroundings. 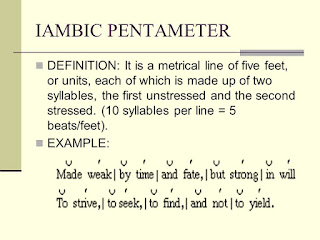 Using slant iambic pentameter and as slant as possible, words of similarity, it just came together, a very song like chant that I believe captures the emotional chaos and tragedy of that moment. It was a great exercise and one I still use to create a very musical poem that sounds great on the ear, especially when read aloud.

Where were you when you started to actually write the poem?And please describe the place in great detail.   I was writing on my balcony in a two-bedroom apartment I shared with a friend, overlooking Galway Bay and the river Corrib in the west of Ireland. It was summer of 2014. Weather permitting, I would sit out here and read and write, drinking as much coffee as possible. 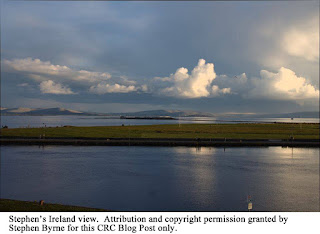 The view was magnificent. The bay, the river, the Clare Mountains. Boats, seals, screaming seagulls, the smell of a sea at high tide, and the stench of the green moss at low. Something I miss is the smell of rain before it appears, and you see it, creeping across the bay, dark as a swarm of bees, before
it hits home. 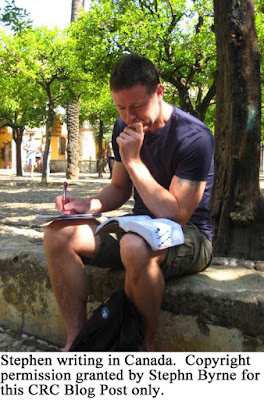 What month and year did you start writing this poem?   July 2014.

How many drafts of this poem did you write before going to the final? (And can you share a photograph of your rough drafts with pen markings on it?)   I can’t find any copies of drafts. Since I’ve relocated, everything is up-in-arms and lot of papers misplaced. But I’ve a good memory. 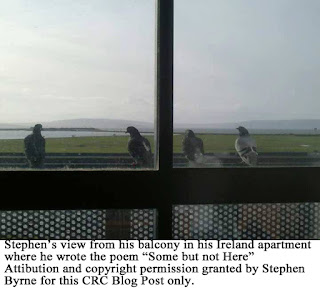 I remember the exercise well and the first draft flew like a bird on the page. I remember being very happy with the first draft, and with this first draft, we would submit it to others and the tutor doing the Iowa-writing program for constructive criticism. From this feedback, I think it took another two to three drafts and I was happy with it. 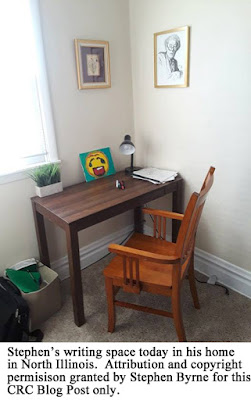 Were there any lines in any of your rough drafts of this poem that were not in the final version? And can you share them with us?    Now, I have no documented evidence so I can’t really say or remember. As far as I can remember, it was in one big verse before been chopped into three. 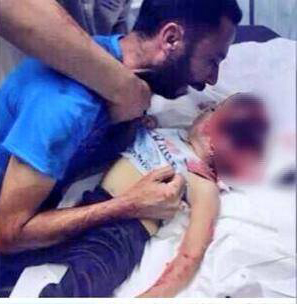 What do you want readers of this poem to take from this poem?   To remember there are always going to be two sides to the same story. Who is right? Who is wrong? But, at the end of the day, someone’s child is dead, regardless of the side you take, never forget the images of the innocent. 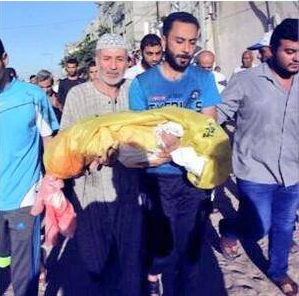 That the statement, war is war, is a load of nonsense. To never forget how lucky and privileged we are to sit on a warm couch at night in our well kept homes without the fear of bombardment or the death of a loved one through shelling. If you have a child, try put yourself in this fathers shoes. 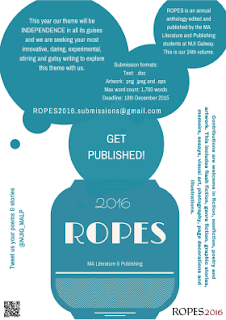 Which part of the poem was the most emotional of you to write and why?   The lines ‘see the doll I got you son’. Watching a father, try to wake a dead child to give him a doll will never leave my mind.

Has this poem been published before? And if so where?   It was published in the annual print journal, ROPES 2015, an annual literature journal brought out by the MA students of NUI college Galway. And at the beginning of this year, it was re-published online and translated into Italian for Inkroci - Magazine of Culture and Cinema. 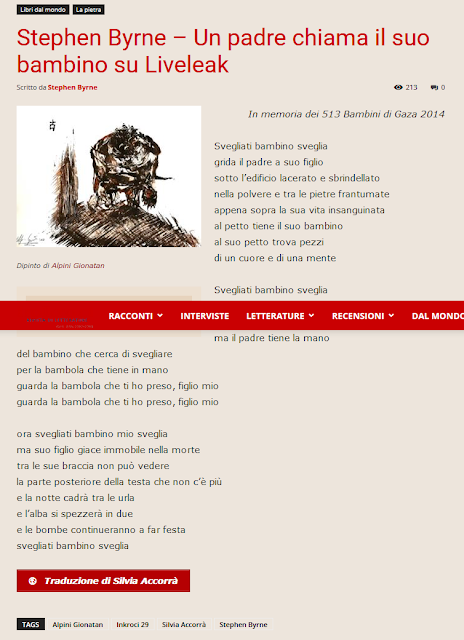 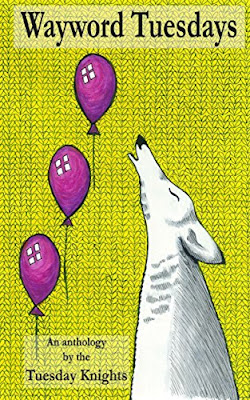 Anything you would like to add?   Yes, don’t be afraid to give the unheard a voice. A huge portion of contemporary writing, especially in the US, revolves around the personal, the confessional. Stand up and write for the unheard and let your emotions carry messages on the wings of a bird or in the wind singing through trees. Thank you for your time and questions. I love this whole concept and may it grow and serve you and the audience well. 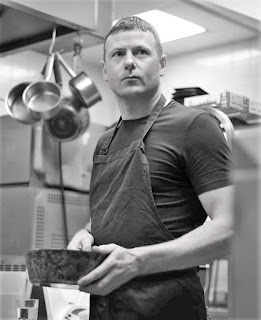 Stephen Byrne is an Irish chef and writer currently living outside Chicago. His first collection ‘Somewhere but not Here’ won the RL Poetry Award, 2016 International category and was a finalist in the International Book Awards. In 2012 he collaborated with 6 Galway based poets known collectively as ‘The Tuesday Knights’ on an poetry anthology called Wayword Tuesdays including a local based artist and photographer. 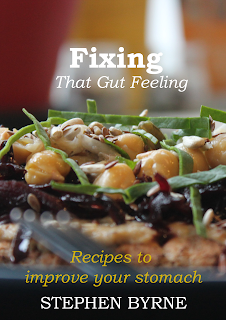 The book was short listed for Writing Magazines Writers’ Circle Anthology Award. He has been published worldwide in places such as Warscapes, Indian Review, Tuck Magazine, Rise Up Review, RædLeafPoetry-India, The Original Van Gogh’s Ear Anthology and many others as well as interviewed by Words Without Borders. He is a food writer for the website This is Galway.
https://stephenbyrne.org

Posted by Chris Rice Cooper Blog at 11:43 AM