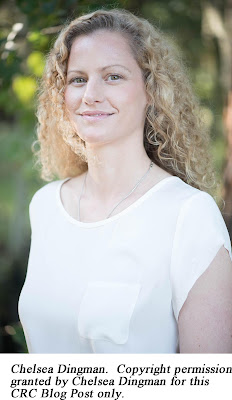 #87 Backstory of the Poem “Letters From a War”
by Chelsea Dingman
Can you go through the step-by-step process of writing this poem from the moment the idea was first conceived in your brain until final form? I wrote this poem late in the writing of this collection.

I was sitting in my home office and the news was on in the other room. It was 2015. I could hear the newscasters talking about overseas conflicts. For some reason, my mind went to images of the Rocky Mountains in British Columbia. Childhood conflicts. I wrote this poem as a letter to the speaker’s mother. Image usually comes to me first, but even sitting in Florida, all I could write was snow. 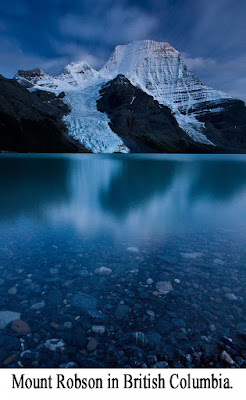 I had two small boys at the time. I kept reflecting on what I would do to keep them safe. The conflict in the poem is between the speaker and the “you.” The mother. She is trying to reconcile the experiences of pregnancy, of childhood traumas, and of women having to give up a version of themselves, over and over, in order fulfill other relationships and responsibilities. 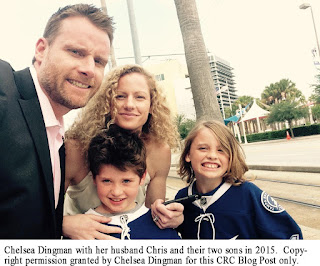 I got to the last few lines. There’s an invisibility specific to women over a certain age, or with small children, or any person who has to give up their identity to keep themselves safe, and I wanted the speaker to reject that, while also accepting that this is the way some people are forced to survive. 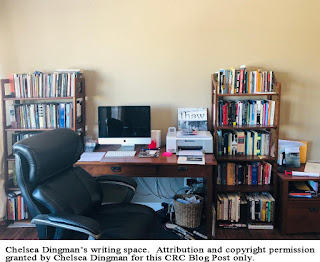 Where were you when you started to actually write the poem?  And please describe the place in great detail. I was in my home office. Soft green walls and carpet. Hurricane shutters closed. No outside light. Two lamps and the overhead light on. Music playing quietly. Books surrounding me on all sides. My manuscript was laid out on the floor behind my chair, taking up most of the room. 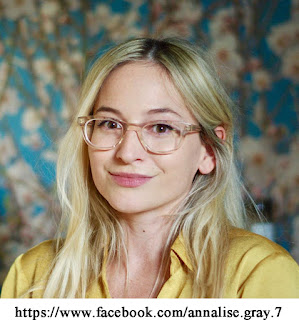 How many drafts of this poem did you write before going to the final? (And can you share a photograph of your rough drafts with pen markings on it?) I wrote two or three drafts of the poem, which is less than usual. 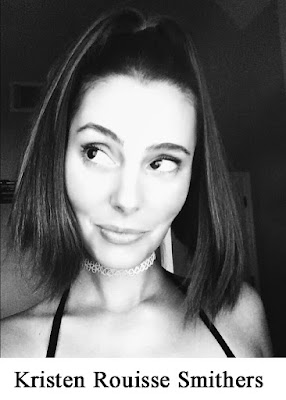 I took it to a workshop with two women (Annalise Mabe Cheng (Right) and Kristen Rouisse Smithers) in my MFA cohort and they both got to the end and just said “yes.”  It was one of those poems that came out very organically. I wrote one draft on paper and then I transferred it to a word document and revised as I typed, making more formal decisions about the poem. I then revised for clarity. 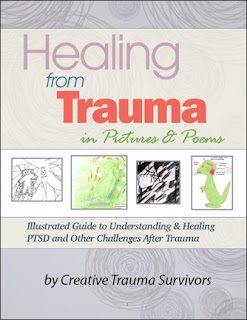 Were there any lines in any of your rough drafts of this poem that were not in the final version?  And can you share them with us? There were no lines that weren’t in the final version, but the images of the highway in the middle of the poem were more extensive. There were more images that related to trauma. I had to condense this because it was true to what I was seeing in my head, but cluttered the clarity of the poem. 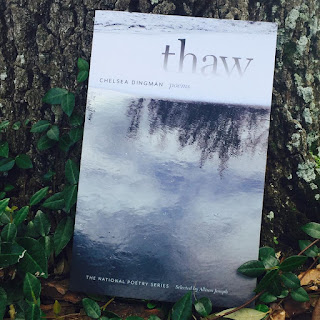 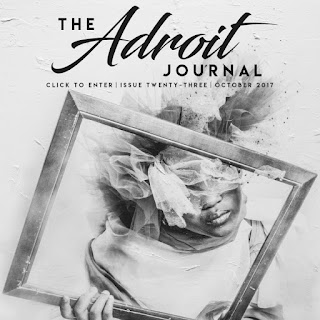 Which part of the poem was the most emotional of you to write and why? The poem started less detached and then became more emotional as the images went on. There is a certain resignation at the end. 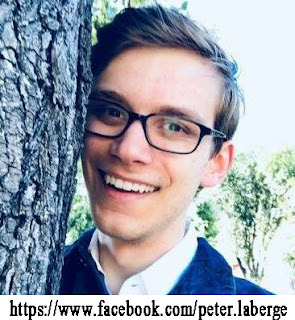 Has this poem been published before?  And if so where? This poem was originally published by The Adroit Journal and Peter Laberge, and for their continued support of my work, I cannot thank them enough.
http://www.theadroitjournal.org/issue-sixteen-chelsea-dingman-the-adroit-journal/

Letters From A War
After another man’s name
found your mouth, after
the bodies laid down
until they couldn’t rise, after
I began to see men
as streets and mountains
and moving skies—I starved
just enough to stay
hungry. Not to kneel
before deep voices, reaching
for any word that didn’t
force its way into my mouth. Why
is my body still empty
with another inside? I used to think
I’d go thirsty to see you
break like a highway’s bones
under the winter snow. Maybe
mornings you forget braiding
thick bundles of hair over
old bruises. But I’ve forgiven
how your whispers sound
like regret. How a mother leaves
when the night is long. My belly brims
with someone, slight and soundless,

who I can’t refuse. I know now
how briefly we are beautiful. How the first
death, for women, is our own. 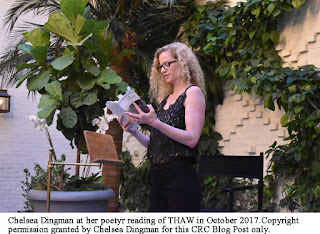 Chelsea Dingman continues her MFA and teaches in the University of South Florida graduate program. In 2016, her work can be found in Washington Square Review, The Normal School, Phoebe, Harpur Palate, American Literary Review, Boxcar Poetry Review, Sou’wester, and Sugar House Review, among others. 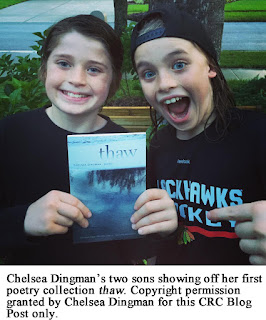 Her first book, Thaw, was a semifinalist for the Lexi Rudnitzsky First Book Prize for Women and the Philip Levine Prize for Poetry. She is originally from Western Canada.
dingmanchelsea@gmail.com
Twitter: @chelsdingman
Instagram: @chels.dingman
Facebook: ChelseaHrechukDingman
Website: https://chelseadingman.com/

Posted by Chris Rice Cooper Blog at 6:38 AM