#098 Backstory of the Poem "Tennessee Epithalamium" by Alyse Knorr

****All photos are given copyright permission by Alyse Knorr for this CRC Blog Post only unless otherwise noted.

Title Photo Below Left- Alyse Knorr in February of 2019. 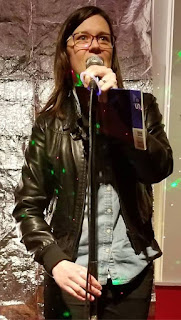 #098 Backstory of the Poem
“Tennessee Epithalamium”
by Alyse Knorr
Can you go through the step-by-step process of writing this poem from the moment the idea was first conceived in your brain until final form?

During the summer of 2014, it seemed like everyone I knew was getting married, and I tried to write a poem or a song to celebrate the weddings of all the couples in my life. One of those couples were my friends Katherine and Asad, who live in Nashville, Tennessee (hence the poem’s name).  I’ve found that when I’m writing an occasional poem, if I think too hard about the people the poem is for, I feel too much pressure and am too worried about what the recipients will think of the poem. So instead, I try to start with what I know, which in this case was my love for my now-wife Kate. I figured that a love poem for Katherine and Asad would feel most authentic if I created it out of the love I know best. 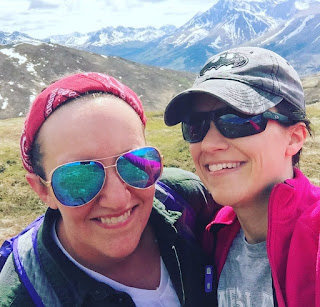 The summer of 2014 also marked the longest time Kate and I had ever spent apart since getting together in 2010 and moving in together in 2012. Kate is a poet, too, and we were apart doing residencies all summer in different locations. We had started discussing whether or not we should get married and whether or not we should have a wedding, which were already complicated topics but made even more complicated by the fact that in 2014, marriage still meant something different legally state by state. We lived in Alaska, where same-sex marriage, at that time, was not yet legal, but if we wanted to, we could travel to Washington and marry. (Above Left:  Kate and Alyse in Alaska)

During that long summer of missing Kate, wrestling with the idea of marriage, and celebrating the weddings of friends, I processed my thoughts and feelings by writing 20 “epithalamia,” each set in a different state. An epithalamium is an ancient Greek wedding hymn, popularized by Sappho, and “Tennessee Epithalamium” is the last poem in my chapbook Epithalamia. 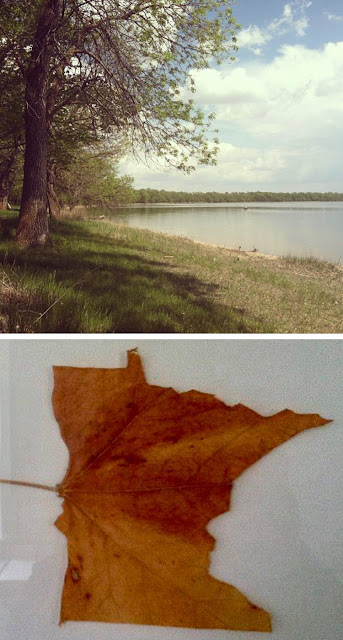 Most of the images in the poem are the things I was seeing living alone in the woods of Minnesota (Right): the crow, the deer, the veins of leaves, the spider, the delicious blueberry pie of the local diner. And my new friend Pam (with Alyse Below Left), who lives in New York Mills, has a wonderful habit of “yarn-bombing”(Below Right)  the lamp posts and stones around town by knitting them little sweaters. I also included in the list items from my own personal experience—memories that I wish I could directly share with my beloved, like the light rain on your face awakening you (that was teenage me waking up in the back of a flatbed one Georgia summer) or the staked dogwood learning to grow (a tree I planted with my father at the house where I grew up). I also tried to include some really massive items, like entire planets, or impossible stars visible during the day.

I scribbled all these list items down in my notebook in no particular form and then typed up the poem and started working on line and stanza breaks, and on an ending (more on that below!). (Below:  Alyse's papers on the floor while in New York Mills) 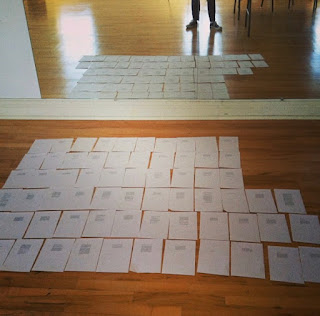 Where were you when you started to actually write the poem?  And please describe the place in great detail. I wrote this poem during a month-long residency called the New York Mills Arts Retreat in New York Mills, MN. New York Mills is a beautiful small town (population 1,224) in the heart of Minnesota, about 3 hours northwest of Minneapolis. While I lived there, you had one option for lunch—the Eagles Café diner—and one option for dinner: the grill at the local bowling alley. The town had grocery store, one gas station, and one main street full of beautiful old Midwestern architecture. The town is bisected by train tracks, and you can hear the trains at regular intervals throughout the day and night. The citizens of New York Mills are very kind and very dedicated to their community. On several occasions I watched all the volunteer firefighters in town run from their places of work to their cars to go and fight a fire. 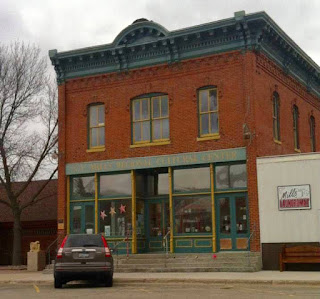 The New York Mills Regional Cultural Center (Right), which sponsors the Arts Retreat, puts residents up in a beautiful old yellow house (Below Left)  only a short walk from Main Ave. The Retreat hosts only one visiting artist at a time, so I was on my own in the one-bedroom house, and spent my days alone reading, writing, and thinking. 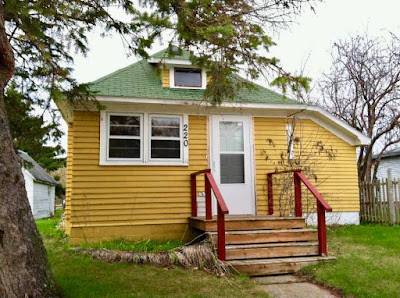 The weather was still pretty cold when I first arrived, but warmed up as the month of May went on. The day I wrote “Tennessee Epithalamium” was bright, warm, and sunny, and I took advantage of that by sitting in the backyard of the house with my notebook. 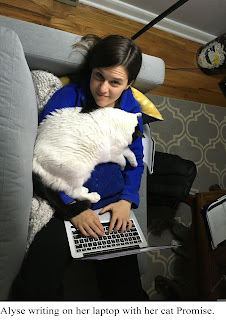 How many drafts of this poem did you write before going to the final? (And can you share a photograph of your rough drafts with pen markings on it?) I rarely compose by hand—I usually start drafts on my laptop because I like how quickly I can cut and paste to rearrange lines, or break lines and play with form. Or hit “undo.” Or delete a line and never have to see it again. But if I want to work outside, or if I’m feeling stuck working on the laptop, I’ll grab my notebook and draft longhand. That’s what I was doing the day I started “Tennessee Epithalamium.” After the handwritten draft in the photo, the poem probably went through five or six drafts on my laptop, mostly playing with form and the order of the items in the list. 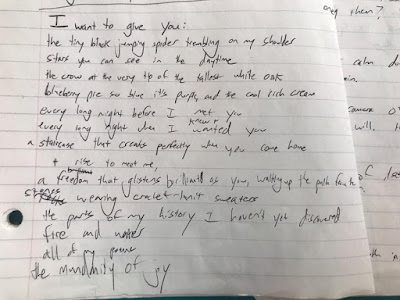 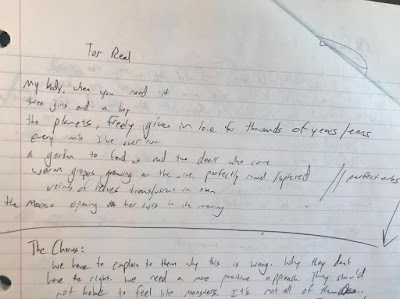 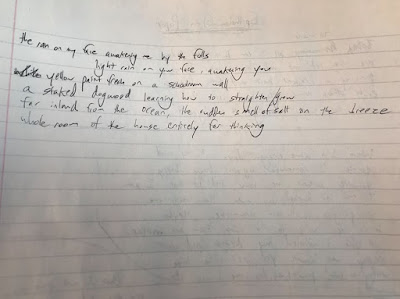 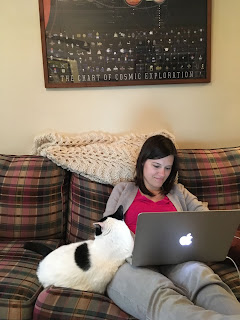 Were there any lines in any of your rough drafts of this poem that were not in the final version?  And can you share them with us? I deleted quite a few items from my original handwritten list. I cut “all of my poems” because I found it too self-referential; “yellow paint fresh on a schoolroom wall” and “every mile I’ve ever run” because they felt too saccharine; and “my body, when you need it” and “three girls and a boy” because they felt too melodramatic. Except for “yellow paint,” these items were all also too abstract and generalized, and not grounded enough in the specific/sensory, as the rest of the items in the final draft are. 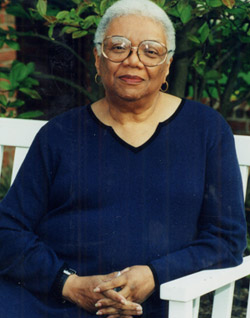 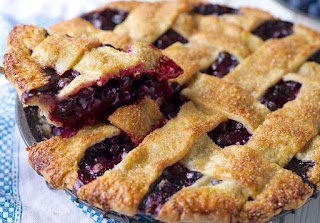 What do you want readers of this poem to take from this poem? The items in the list are meant to evoke sensory experiences, so I hope the reader can taste the blueberry pie and the cream, feel the rain on her face, and smell the salt on the breeze. I hope that the images provide pleasure and delight, and that the reader feels connected to the earnest, urgent love at the core of the poem, which is what occasions the speaker offering this list to the beloved.

Which part of the poem was the most emotional of you to write and why? While I wrote this poem, I mostly felt joy and love and delight. It’s fun to imagine all the things you’d give the person you love, if you could, and writing it made me feel simultaneously more connected to Kate, Katherine, and Asad. List poems are fun to write, too, because they start to create their own momentum, and composition becomes a kind of exhilarating, cascading process. I also had fun coming up with very different types of items to offer as gifts—things that maybe wouldn’t actually make great gifts (like the spider) or that would be impossible to give (like the planets). But I probably felt the most excitement and satisfaction when I wrote the final couplet, “But I will give you one thing today,/this first of all the days.” I didn’t write this couplet in the first draft; I just wrote the long list and didn’t really know how to end the poem. That came later, with the form.

In the process of typing up the poem, I experimented with a lot of different forms stichic,  tercets, prose, etc. Finally, I landed on the short-medium-length couplets, and that helped me write the final couplet. I knew I wanted some kind of turn at the end, the way a sonnet turns on the final couplet. So I typed “But.” 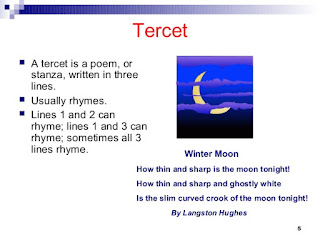 Then I thought about what would negate or subvert or complicate the big long list of gifts that preceded the “but,” and the answer was to give just one thing. In the final couplet, I could have stated what that “one thing” is, but I wanted the poem to be subtler and more complex, and I also wanted to turn into the idea of marriage—the idea that today is a special day because today is the day of the wedding. 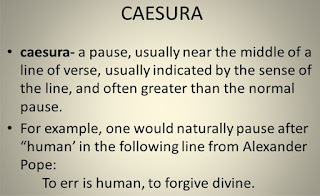 I wanted the poem’s final line to explain why we’ve been talking about gifts and giving this whole time, and to offer the idea that the gift is the wedding, which is the self, the commitment, the promise of marriage. In a way, wedding vows are just lists of promises, which are gifts, so this poem, to me, reads like a set of wedding vows (which is why I put it last in the chapbook). In addition, the caesura at the end of the couplet’s first line set up a feeling of heavy closure for the final line, and I liked the idea of the poem’s final line sounding like both an ending and a whole new beginning (like what a wedding represents).

So all of that helped me compose the poem’s very last line, and typing out the final words felt both surprising and inevitable, which is the feeling I most love to have while reading and writing poems. It’s the addicting feeling that keeps poets writing.

Has this poem been published before?  And if so where? This poem appeared in my chapbook Epithalamia, published by Horse Less Press in 2015.

Tennessee Epithalamium
I want to give you:
the tiny black spider trembling

on my shoulder
stars you can see

in the daytime
the crow at the very tip

every long night when I wanted you
staircase that creaks perfectly

walking up the path from the lake
stones wearing crocheted sweaters

the parts of my history
I haven’t yet found

fire and water
the mundanity of joy

the planets, freely given in love for eons
garden to feed us and two deer

warm grapes on the vine, perfect orbs
the red fox opening her eyes in the morning.

But I will give you one thing today,
this first of all the days. 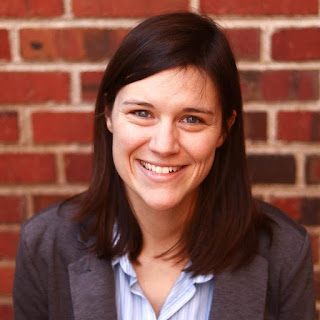 Her work has appeared in Alaska Quarterly Review, Denver Quarterly, Columbia Poetry Review, The Greensboro Review, and ZYZZYVA, among others. She received her MFA from George Mason University, where she co-founded Gazing Grain Press.
www.alyseknorr.com
Alyse.knorr@gmail.com
BACKSTORY OF THE POEM LINKS