#102 Backstory of the Poem "THUNDER" by Jefferson Carter 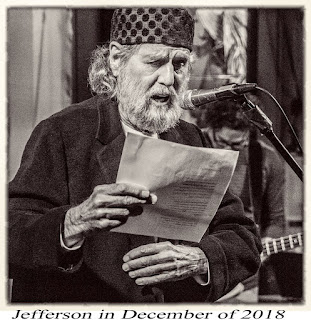 102 Backstory of the Poem
“THUNDER”
by Jefferson Carter
Can you go through the step-by-step process of writing this poem from the moment the idea was first conceived in your brain until final form? The poem began the next morning after a thunderstorm; Loki, our aging Lha-poo, had climbed into bed with us (with wife Connie below right) , frightened by the thunder.  I began wondering what it was like for her to experience her existence.  My poems often begin as "descriptive-meditative" pieces, a description of a scene, then a meditation kicked off by the scene.  My best poems are collages, disparate texts pieced together in the hope they will somehow cohere. 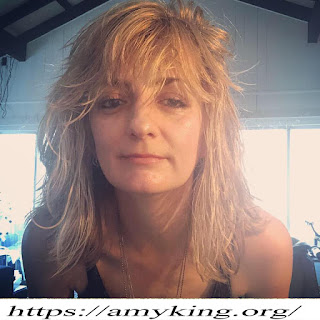 Lines 11-14 were lines from a joke about dogs I heard at a dinner party.  Ironically, Amy King, who directs the poetry site on goodreads, a person I dislike as a careerist and sexual politics fanatic, attacked the poem, saying I had stolen the lines from another poet. She said I had to credit the source. Since I'd never seen the aforementioned poem (I did look it up, suspecting the joke was in general currency), I ignored King's advice.  I haven't been arrested by the Poetry Police yet.  Good poets borrow, great poets steal is a sentiment I condone. 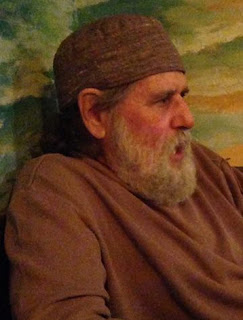 Lines 15-16 are my "own," just a lucky ending I hadn't planned on.  The repetition spontaneously appeared and seemed perfect for a dog's exist-in-the-moment point of view.

What month and year did you start writing this poem? Five years ago in 2014 (Left:  Jefferson in November of 2014) 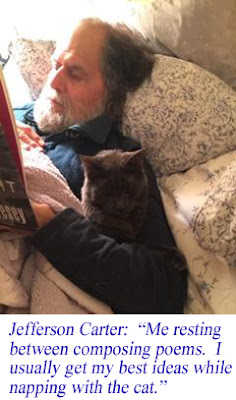 What do you want readers of this poem to take from this poem?  I want my readers (though I try not to envision a reader when I write, forcing myself to envision MYSELF as the only READER) to enter an animal's point of view, to experience something that contradicts the Disney perception of animals as cute humans. I'm a volunteer with a local environmental group; processing thousands of remote camera images of wildlife going on about their business, I'm convinced animals live in a parallel reality, one not available to us humans. 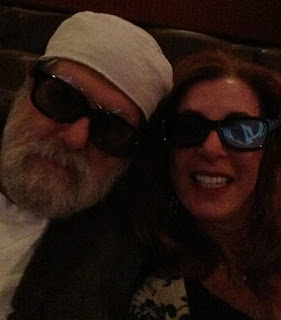 Which part of the poem was the most emotional of you to write and why?  Lines 5 through 8 were emotional for me.  My wife Connie (Left) and I knew Loki was getting old and would be leaving us soon for that big farm in the sky.  Describing her brought that fact home to me.

Has this poem been published before?  And if so where?
The poem has been published numerous times, most recently in my collection Get Serious: New and Selected Poems (Chax Press, 2013). 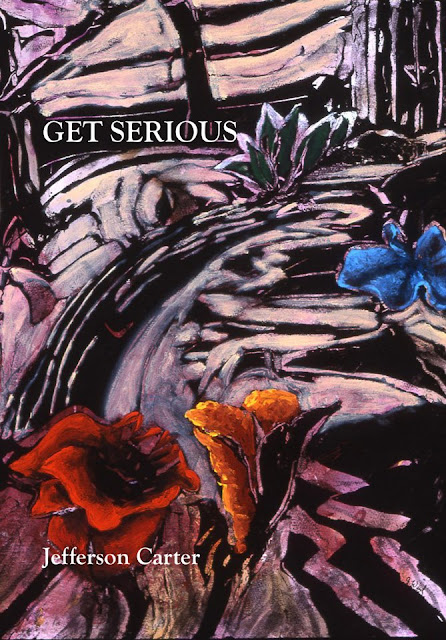 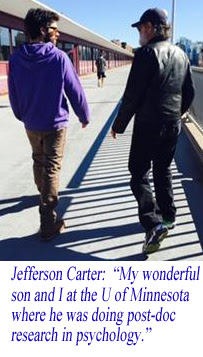 Anything you would like to add? It's kind of my "signature" poem, one I begin my readings with.  Believe it or not, audience members sometimes request it! I've also read it between songs at a local rock concert with the drummer giving me a roll before each "thunder" in the last two lines. The crowd (or at least the ones who are actually listening) goes wild!

Lightning, then, of course, thunder.
We can get used to anything.
The window, lit up, shakes
& we’re comforted, pulling
the blankets to our chins.  The dog,
half-blind, diabetic, fat as a woodchuck,
burrows between us, panting,
trembling like she’s never heard
thunder before.  Maybe she hasn’t,
she lives so much in the moment.
Here’s her day: I was in.  Now I’m out.
I was out.  Now I’m in.  You going
to eat that?  You going to eat that?
I’ll eat that!  Here’s her night so far:
What’s that?  Thunder.  What’s that?
Thunder.  What’s that?  Thunder. 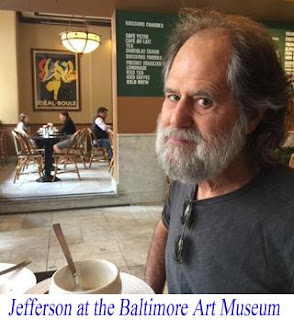 Jefferson Carter has poems in such journals as Carolina Quarterly, Barrow Street, Cream City Review, Rattle, and New Poets of the American West.  Chax Press (Victoria, Texas) published his ninth collection, Get Serious: New and Selected Poems, which was chosen as a Southwest Best Book of 2013by the Tucson/Pima County Public Library.  Diphtheria Festival is now available from Main Street Rag Publishing. He lives in Tucson where he volunteers with Sky Island Alliance, a regionally-based environmental organization.
https://www.jeffersoncarterverse.com/

Posted by Chris Rice Cooper Blog at 3:48 PM No comments: Links to this post