Can you go through the step-by-step process of writing this poem from the moment the idea was first conceived in your brain until final form? “When You Ask Me to Tell You About My Father” began as an in-class exercise for the Draft to Craft Poetry class that I teach, using an assignment that I borrowed from Rebecca Gayle Howell. The activity—we paired up and each poet interviewed the other about his or her father. (In Rebecca’s class at the Appalachian Writers Workshop the interviews were about our mothers.) 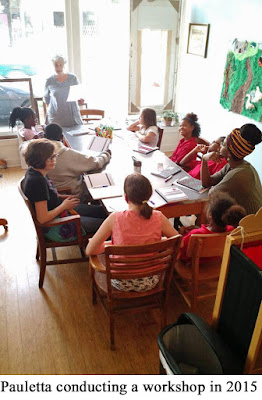 Then we wrote a poem about the other poet’s father and then eventually about our own, using the other poet’s poem and interview notes.  So, when I sat down to write this poem, I had a specific reader in mind—Drew, my student and fellow poet—alongside my usual mix of internal/external audience (I am writing to better understand the subject/I am writing to be understood). 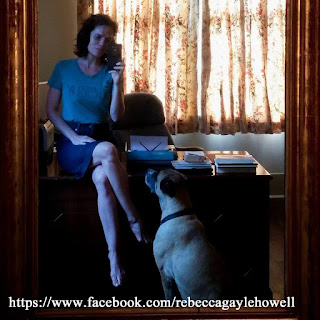 It began longhand, as almost all my poems do, and this poem began as a poem/prose hybrid, which is a little unusual—I usually know right away if I am writing prose or essay. 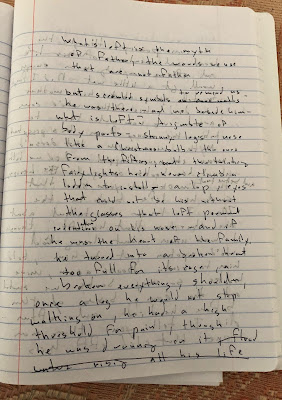 I moved from written page to typed page the same day—at least in part because I was taking the draft to class with me the same week. In my mind I was filling in the gaps of what I had shared in the interview, as well as including info I had given Drew. Drew had also shared his notes from the interview, so I had those to refer to. Most of what was in the notes showed up in the poem, some in a roundabout way (the description of Dad’s Christmas bulb nose was probably influenced by me saying he made a good Santa). 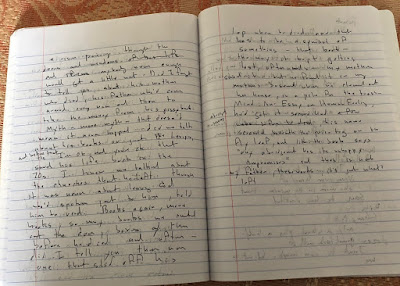 Where were you when you started to actually write the poem? And please describe the place in great detail. The interview with Drew was in the hallway of the Thomas More University English Department—no one else was around, so we had privacy—bright fluorescent lights and a Formica topped table. Next to the copy machine. 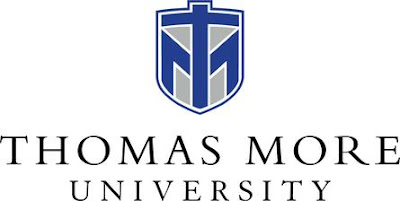 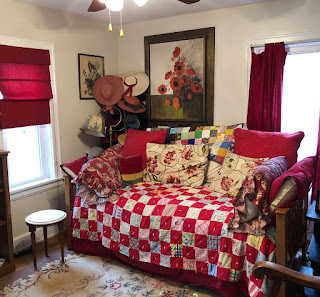 I drafted the poem in our guest bedroom. There’s a daybed where I sprawl out to right longhand. My husband’s books are in that room—mostly Civil War and other military history. Lots of quilts and pillows on the daybed, quilt rack behind the bed and also a hat rack with my collection of hats mostly from the 40s and 50s. Hooked floral rug which, amazingly, my cat does not like to scratch. My stepdaughter says the room is haunted, mostly because it has old stuff in it. But I often start poems there, so maybe it is poem-haunted, too. 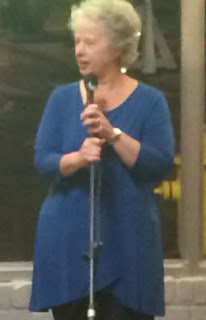 What month and year did you start writing this poem? The class when we did the interviews was in late September 2017 and the poem was drafted in early or mid-October. (Right) 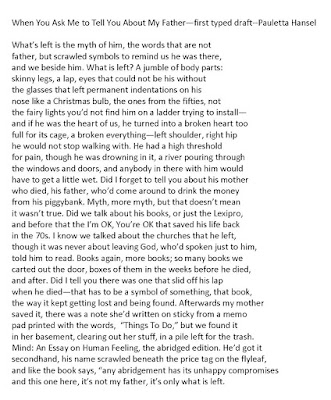 I have the handwritten draft, plus five typed versions. I’m sharing the handwritten version (with some mark-ups) and the first and final drafts—I don’t have pen markings on the typed drafts—I worked on the computer at that point. The title came with the first typed draft. I also added line breaks, though I kept the long prose-like lines. In one version it looked sort of like the profile of a face, which was sort of cool, and I tried to keep that, but it didn’t work with intentional line breaks. 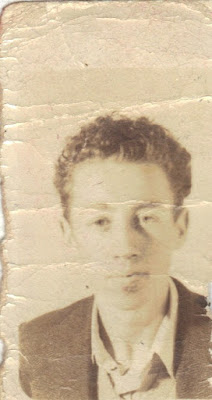 Were there any lines in any of your rough drafts of this poem that were not in the final version? And can you share them with us? Mostly I made minor adjustments, but I took out an early line describing the Christmas bulb as “ the ones from the fifties, not/the fairy lights you’d not find him on a ladder trying to install—“ as it was tangential (though descriptive of his lack of interest in being handy around the house!). I will say that I went back and forth with the sentence, “That has to be/a symbol of something, that book,…” At least one reader felt like it was too self-conscious, but I ultimately decided that the poem as a direct address had an element of self-awareness that made the sentence fit the aesthetic of the poem—plus it was an echo back to the poem’s beginning line. (Above Right:  Pauletta's father in the 1950s) 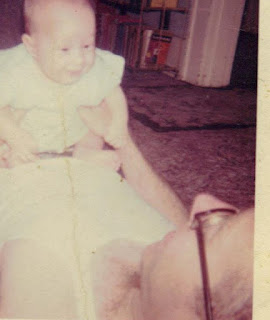 What do you want readers of this poem to take from this poem? This poem tends to have an emotional impact on its listeners when I read it aloud, and I am glad of that. It is about loss, of course, and how little we know of our parents, no matter how we try. The poem has intentional line breaks, but it presents as a prose poem, and thus it makes me read it that way as well, with a sort of tumbling breathless quality, like I am trying to get it all in. (Above Left:  Baby Pauletta with her father) 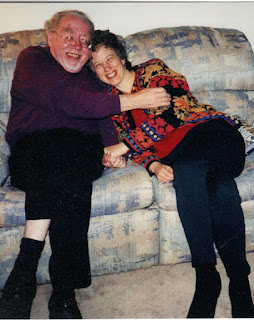 I hope that carries over to the reader when it is on the page. There is also something in the poem that is “about” reading a life as text, with its metaphors and serendipities, its mysteries and kismet, and as a memoirist and a poet who works from life and memory, that is part of my own purpose of writing—to make literature from life. (Right:  Father and Daughter)

Which part of the poem was the most emotional of you to write and why?  When I got to the part in the draft about the book on Dad’s lap when he died, I knew I had to go find that book. I had written about it before in a memoir piece, but that was before we had saved it from the trash, and I didn’t know the book’s title. And then, when we did rescue it, it was during such an emotional time, cleaning out Mom’s house after her move to the nursing home in 2015, and so much of my energy had been given to caring for my Mom with dementia -- and my personal writing until I gave that assignment was also mostly about Mom— Palindrome, a whole book devoted to her came out right about the time I wrote this poem. So finally searching out the book, learning the title and seeing its relationship to the poem I was writing—the poem’s ending felt like a little gift from Dad. That he was still with me, helping me see him and the world through his eyes. (I guess another way that room is haunted!) 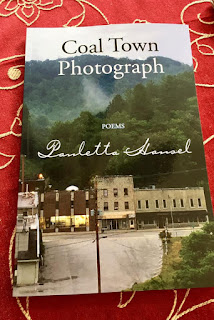 Has this poem been published before? And if so where?
Yes, in Appalachian Heritage, Winter 2018: http://appalachianheritage.
net/2018/03/27/when-you-ask-me-
to-tell-you-about-my-father/  It Is in my new collection of poetry, Coal Town Photograph, out from Dos Madres Press in Spring 2019

Anything you would like to add? Thanks for the opportunity

When You Ask Me to Tell You About My Father

What’s left is the myth of him, the words we use, scrawled symbols
to remind us he was there. A jumble of body parts: skinny legs, a lap,
eyes that were not his without the glasses that left permanent dents
on his Christmas bulb nose, and if he was the heart of us, he turned
into a broken heart too full for its cage. A broken everything—left
shoulder, right hip that would not stop him walking. He had a high
threshold for pain, though his mind was drowning in it, a river pouring
through the doors, and anybody close would have to get a little wet.
Did I forget to tell you about his mother who died of the consumption,
his father who’d come around to drink the money from his piggybank?
Myth, more myth, but that doesn’t mean it wasn’t true. Did we talk
about his books, or just the Lexipro, before then the I’m OK, You’re OK
that saved his life back in the 70s? I know we talked about the churches
that he left, though it was never about leaving God, who’d spoken just
to him, told him to read. Books again, more books; so many books we
carted out the door, boxes of them in the weeks before and after. Did I
tell you there was one that slid off his lap when he died? That has to be
a symbol of something, the book, the way it kept getting lost and being
found. Afterwards my mother saved it, labeled with a note she’d written
on a sticky from a memo pad printed with the words, “Things To Do,”
but we found it in her basement, clearing out her stuff, in a pile left
for the trash. Mind: An Essay on Human Feeling, the abridged edition.
He’d got it secondhand, his name scrawled beneath the price tag on
the flyleaf, and as it says there in the foreword, “any abridgement
has its unhappy compromises” and this story I’m telling you, it is
not my father, it’s only what is left. 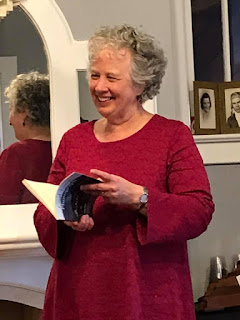 Pauletta Hansel is author of seven poetry collections, including Coal Town Photograph (Dos Madres Press, 2019) and Palindrome (Dos Madres Press, 2017), winner of the 2017 Weatherford Award for best Appalachian poetry book. Pauletta was Cincinnati’s first Poet Laureate (2016- 2018) and is artist in residence at Thomas More University. She is managing editor of Pine Moun­tain Sand & Gravel, the literary publication of Southern Appalachian Writers Cooperative and leads writing workshops and retreats in the Greater Cincinnati area and beyond. Visit her website at https://paulettahansel.wordpress.com/.
Pauletta.hansel@gmail.com

Posted by Chris Rice Cooper Blog at 10:34 AM